Lions and Tigers and Bears
Votes

Lions and Tigers and Bears 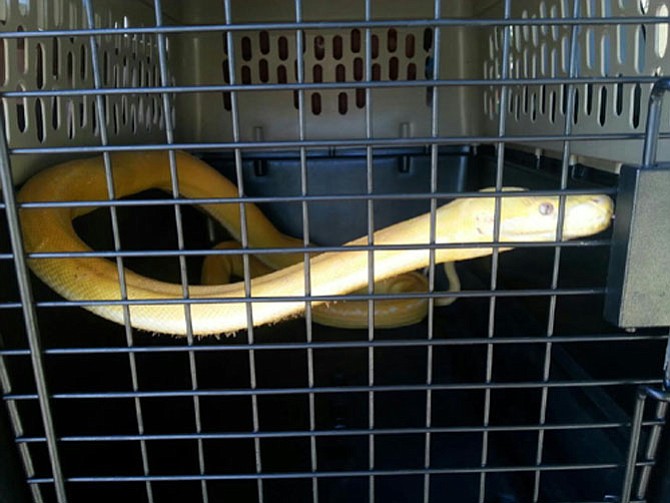 There are a number of hazards firefighters commonly expect when entering a burning building: Falling debris, sudden blasts of heat, etc. What the Arlington firefighters responding to a call in 2008 probably hadn’t expected was to burst through the door and find themselves facing a house full of loose, venomous snakes.

That incident sparked the first series of Arlington regulations on exotic animals, banning venomous snakes. But so far, these regulations remain the only ones in the county. Any animal not prohibited at the federal or state level is allowed in Arlington. This includes wolf or cat hybrids, massive snakes, raccoons, and even monkeys. But new regulations could change Arlington’s exotic policy.

At its March 18 meeting, the County Board considered new policies that would limit exotic animal ownership in Arlington. The new policy would prohibit Arlington homeowners from owning “… any live monkey (nonhuman primate), raccoon, skunk, wolf and wolf hybrids, coyote, squirrel, fox, leopard, panther, tiger, lion, bear, small wild cats including hybrids (i.e., bobcats, lynx and caracal), ratites (flightless birds), sugar glider, or any other warm-blooded mammal, venomous snake or reptile that can normally be found in the wild state, or any other crocodilian, including but not limited to alligators, crocodiles, caimans and gavials …” as well as several varieties of scorpion and spider.

Current exotic pet owners would not be required to part with their companions, but would instead have to register their animals with the county. There was some discussion on the County Board about whether this would also apply to people who move into the county after the passage of the new regulations, but as written they would be required to surrender their animal.

According to the County Board report, the new regulations serve to help protect both residents and animals in the county, to help protect Arlington’s public safety officials, and to align Arlington within the code of nearly all of the neighboring jurisdictions.

The regulations went through several changes based on public input. Hedgehogs, initially banned, were taken off the list, as were all birds except ratites. The limitations on scorpions, spiders and centipedes were adjusted to include specific genuses.

Limitations on snakes were initially determined by length, but stretching out a snake to measure it can be harmful to the animal, so the limit was later determined by weight. This was one of the primary topics of discussion during the public hearing portion of the meeting. Snake weight can vary greatly depending on how recently they’ve eaten, so snake owners were wondering whether this would be taken into consideration during weight checks. Others said the snake weight limitations felt arbitrary.

“I’ve had snakes that weight up to 175 lbs that I’ve brought with me to birthdays for four or five year olds,” said Bonnie Keller, from Virginia Reptile Rescue. “Clearly they weren’t dangerous. Reptiles are one of the fastest growing segments of the pet population. Rather than try to fight against this change, it’s better to try and figure out how we encompass [it]. We’re no longer on the fringe. We’re no longer the freaks.”

For several speakers, the overly broad language led to confusion over what was and wasn’t allowed. Dillon Danutz noted that the ban on reptiles that are also found in the wild in Virginia could be misconstrued as limited pet bearded dragons or gekkos, two popular reptile pets.

Jennifer Toussaint, Arlington’s Animal Control Officer with the Animal Welfare League of Arlington, likely sees more of the county’s exotic animals than most. Over the years, Toussaint has run into lemurs, cranes, pythons and all sorts of large cat hybrids.

“Just like I think there’s more dogs and cats than people assume, exotic animal ownership is very high in Arlington, even compared to other local jurisdictions,” said Toussaint. “Arlington is an animal friendly community ... Because you don’t walk them on a leash traditionally, people don’t know [their neighbors] they own them. Exotic pet ownership is very high, and people have no idea.”

Toussaint said exotic pet ownership is on the rise for people in the United States, with animals like sugar gliders and hedgehogs becoming increasingly popular. People who have pet allergies are also increasingly turning to reptiles as alternatives. Toussaint also said monkeys are very popular as a local housepet, particularly capuchin monkeys. According to Toussaint, most are bought from a breeder in Virginia Beach. These and other exotic animals frequently crop up on Craigslist (none currently available).

“I try to prepare my officers for every probability,” said Toussaint, “but there’s no way for some of the exotics that are permitted. I don’t wear a kevlar suit. Somebody’s cat hybrid, if it got loose, I’m running around chasing it in a shirt and pants.”

The most troublesome escaped pets are often reptiles. Toussaint said people are often afraid of reptiles and can react violently to them, attacking the animal with shovels or rocks. These can also be very quick and difficult to catch. When the calls or pictures come in of an exotic reptile on the loose, Toussaint said more often than not it’s of the animal slipping into the sewer system or into the small cracks under homes.

For a week and a half, Toussaint once chased a six foot long albino ball python across the county. It was known to be on the loose, people took photographs, but by the time Toussaint showed up it was either gone or unreachable. She was finally able to contain the snake, though by that point the python had already managed to damage herself, covered in ripped scales and other abrasions.

“Recently, it’s been all about snakes,” said Toussaint. “We’ve been getting snake calls with snakes that aren’t native to the area. Two months ago, we found an anaconda in a toilet. We picked up a boa dumped in a dumpster in the cold. These animals are ending up in places they shouldn’t and people are freaking out, but I can’t highlight this enough: it’s an animal welfare issue. We’re dealing with animals not being cared for appropriately.”

Toussaint said she’s particularly happy to hear about the registration process for animals already living in the county. An exotic animal registry, which will be free to current exotic pet owners, will make it easier for Toussaint to return missing animals to their owners.

“People have passed exotic codes banning x, y, or z, but there’s no stipulation for all the animals that fall into that category when [the regulation passes],” said Toussaint. “They could be sold on Craigslist or given to family members that don’t know how to care for them, or they end up owning them illegally when they love them. When these laws are passed elsewhere, it misses that piece. People legally acquired these animals, and I don’t think that’s a humane approach.”

Given the amount of public feedback on the exotic pet regulations, the County Board voted to delay the exotic pet ban until reconsideration on June 17.