‘Exemplary Service’ — PFC Culbertson is Sully’s Officer of the Year. 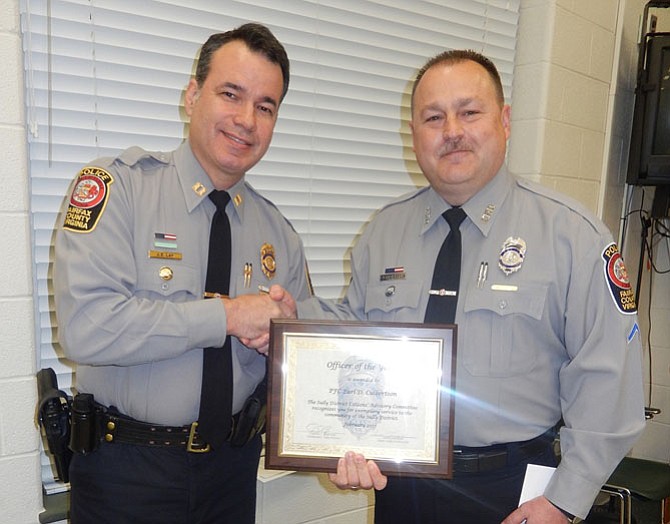 PFC Earl Culbertson is such an outstanding police officer that, not only was he named the Sully District Police Station’s Officer of the Month for October, he was also honored as its Officer of the Year. The awards were presented in conjunction with the station’s Citizens Advisory Committee, so it was fitting that he was recognized during its meetings.

According to his Officer of the Year certificate, Culbertson was acknowledged for his “exemplary service to the community of the Sully District.” He’s now going to be a community outreach officer; and PFC Tara Gerhard, the station’s crime-prevention specialist, said he’ll do a great job in that position.

“I’ve worked with Earl on several, different occasions,” she said. “He’s phenomenal and top-notch and a really good guy.”

In nominating him for the October 2016 Officer of the Month award, Lt. Andrew Wright explained his many attributes. “PFC Culbertson recently left the Sully District Special Enforcement Team (SET) after distinguishing himself, not just in traffic enforcement, but in community relations and teamwork,” wrote Wright. “He is always available to quickly address issues in our community, such as [drivers] passing loaded school buses and commuters speeding through neighborhood streets.”

Wright said the contacts Culbertson made during these enforcement and educational campaigns have helped keep the Sully District Station in touch with, and responsive to, its community partners and neighbors. “Culberson embraces the idea of crime prevention by reaching out to residents who complain about various issues in the community,” wrote Wright. “He makes it a point to meet with the resident and explain how we conduct enforcement on the issue at hand and, if appropriate, allows the resident an opportunity to use the equipment the enforcement requires. He goes above and beyond the handling of complaints and is quick to address the concerns of our residents.”

In terms of traffic enforcement, Wright described Culbertson as “self-motivated” and called him a “traffic-citation leader in Fairfax County,” with more than 2,000 tickets issued during 2016. “However, he added, “It is teamwork that truly sets Culbertson apart. When the SET unit staffing was adjusted to assist patrol, it was Culbertson who volunteered to leave the position he loved and return to patrol. This move showed his dedication to his team, whose other members were unable to make the schedule change work for their families. PFC Culbertson is a dedicated employee and is very deserving of the recognition as Officer of the Month.”

Lt. Joseph Ankers wrote Culbertson’s nomination letter for his 2016 Officer of the Year award. He said Culbertson “continues to be an asset to the Sully District Station while in different roles during his six years of being an officer.” Like Wright, Ankers, too, noted that, while assigned to the Special Enforcement Team, Culbertson was highly experienced in resolving community issues through teamwork and enforcing the traffic laws.

In fact, during Culbertson’s award presentation at the Feb. 8 CAC meeting, his advice to the community was to “Slow down in residential neighborhoods. We get more people speeding in them than on Route 28.”

In addition, wrote Ankers, “Culbertson thoroughly completes assignments in a timely manner and without hesitation or question. The partnerships he has made during his efforts to keep the community safe have been invaluable in solving issues that have been presented to the police department.”

He wrote that Culbertson addresses each matter thoroughly, not only by enforcement, but also by educating residents and explaining what actions were taken. “As Culbertson continues his high level of performance, he seeks new avenues to increase his productivity and to strengthen his community partnership,” wrote Ankers.

By the end of last year, Culbertson wrote 2,300 traffic citations — the third-highest number of tickets written in 2016 by any officer in the entire Police Department. Furthermore, wrote Ankers, “Culbertson’s flexibility is appreciated, as he is willing to adjust his schedule at a moment’s notice. He is able to conform to any team environment in a short period of time.”

“He has sacrificed his schedule to benefit his peers in multiple ways to include switching to a patrol schedule to fill the needs of staffing,” continued Ankers. “Tasks that aren’t routine are accomplished with his diligence in a timely manner, without question. PFC Culbertson is a dedicated employee and is very deserving of the recognition as the 2016 Sully District Station Officer of the Year.”