Citizens Connect With Cops Over Coffee 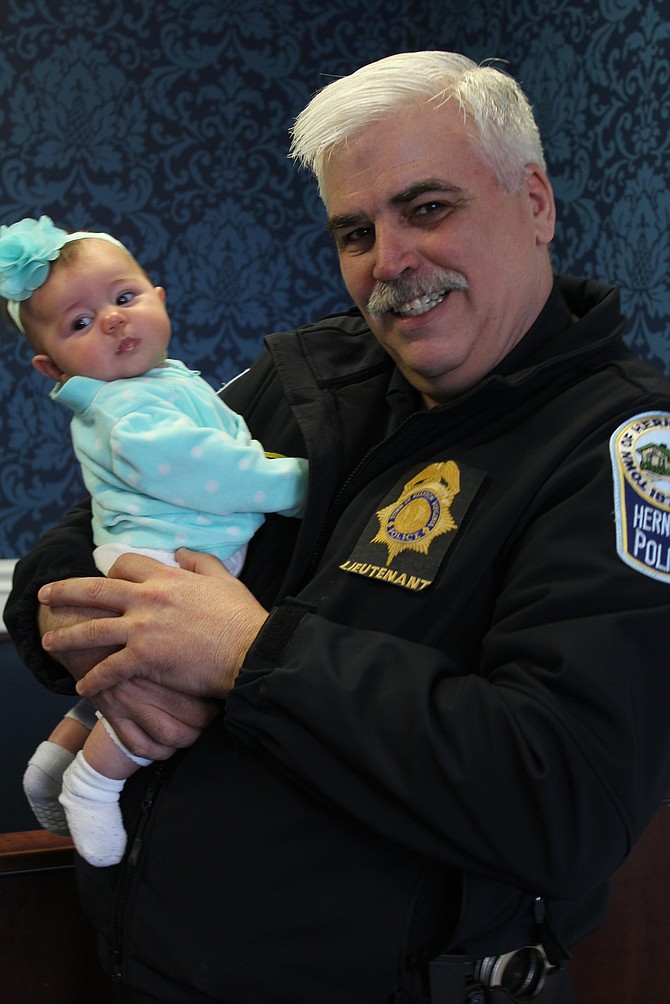 Herndon Police Department Lt. Michael Berg scoops up 4-month-old Lila Cannell while he speaks with her mom, Shannon Cannell, during the “Coffee with a Cop” event at the Virginia Kitchen restaurant on Monday, March 13. Photo by Fallon Forbush.

Bill Davis of the town of Herndon talks with Herndon Police Department Chief Maggie DeBoard about his neighborhood’s concerns on behalf of the Four Seasons Homeowners Association. DeBoard takes notes on a yellow notepad.

Herndon Police Department Cpl. Mark Fraser listens to a family while they wait for their breakfast to be served: Paul Cella and son Seth Cella, 9, and Jeanne Travis and her daughters Kaitlyn Travis, 10, and Rachel Travis, 8.

The Herndon Police Department invited the public to sit down and have a cup of coffee with officers at the Virginia Kitchen restaurant on Elden Street on Monday morning, March 13.

A handful of people, including Herndon Councilmember Sheila Olem, took them up on their offer.

“I wanted an update about activities in the town,” said Bill Davis, president of the Four Seasons Homeowners Association in the town of Herndon. “I followed up on some issues that I reported. Most of them had been taken care of, but they’re still working on one of them.”

He was glad the department held the event and hopes they do more.

This was the department’s second “Coffee with a Cop” event. The first one was at Amphora’s Diner Deluxe on Elden Street in March 2016.

“It’s about meeting with the community,” said Jane Ross, the department’s spokesperson. “There’s no agenda. It’s just a chance for officers to sit with the community and talk about anything. People get to know the officers in a relaxed atmosphere.”

Shannon Cannell came to eat breakfast at the restaurant without knowing the department was hosting the coffee hour.

“I was surprised to see the chief is a female,” Cannell said. “That’s awesome.”

She walked her two youngest children — 4-month-old daughter Lila and 3-year-old son Reed — over to meet the officers.

“It’s good for the kids to know they’re around and that they’re friendly,” she said.

Ross said the department hopes to grow the event and hopes more people come to banter at the next one.

“The more interaction, the better,” she said.

The department is hosting its next public forum at the end of the month, where Chief Maggie DeBoard will address the department’s deployment of body cameras.

“I expect positive reaction, but some concerns about how they’ll be used, which makes sense,” DeBoard said.

She wants people to know that the bodycams will be used responsibly.

All uniformed officers on patrol or interacting with the community will be required to wear them and will not be able to delete videos, according to DeBoard. There will also be an auditing process to ensure officers turn them on when they are supposed to do so, she said.

“I hope people turn out so we can take their input and show that we’re going to have a consistent application,” she said. “It’s for our transparency and accountability and I want people to be comfortable that we’re doing things well and responsibly.”

DeBoard started seriously considering bodycams for her officers two years ago and decided that the department needed other video enhancements first.

Last summer, the department replaced its interview cameras at the police station and all its vehicle cameras. The body cameras were the final step in the department’s video upgrade, according to DeBoard.

A bodycam pilot program was implemented at the end of last year, with the full roll out planned for next month, which is sooner than expected.

“The bodycams aren’t expensive, but the storage of the video is,” DeBoard said.

The Herndon Town Council approved $71,000 of new funding for the bodycams in its fiscal year 2017 mid-year budget on Feb. 14.

“We wanted to really take our time,” DeBoard said.

DeBoard’s bodycam forum will be on Thursday, March 30, at 7 p.m. at the Herndon Police Station.