Madison Madrigals to Perform in McLean 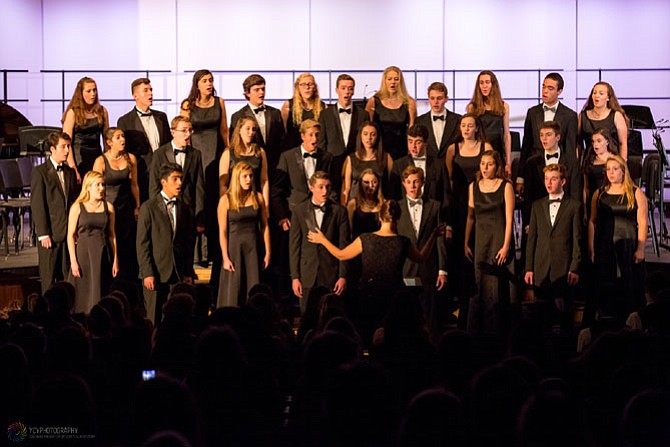 The Sunday, March 12 concert is at 4:30 p.m. at St. Luke Catholic Church in McLean. Photo contributed

Not many high school choruses get to both write and commission a piece of music. But with a grant from the Wolf Trap Foundation for the Performing Arts, the Madison High School Madrigals got composer Robert McCullough to help them write “Psalm of Life,” based on the Henry Wadsworth Longfellow poem of the same name. The Vienna high school's work was debuted by the chorus at Vienna Presbyterian Church in 2014.

This Madrigals are high-energy students. Director Claire Rowan estimates that the 30-member group makes 15 to 25 appearances throughout the area in December alone. You'll see the singers, too, at fundraising events such as a drive for toys for the local hospital, holiday events and building dedications.

The Madrigals and the women's chorus will sing a variety of gospel, spiritual, classical and contemporary traditional music at City Choir of Washington's March 12 concert (4:30 p.m.) at St. Luke Catholic Church in McLean. The Madrigals will do double duty, singing with us in Dona Nobis Pacem. Rowan figures that the students' friends, parents and school alumni will want to attend.

Madison also happens to be the place where Robert Shafer got his start in 1968. Returning to the school in advance of the concert, Shafer passed on some history of the chorus to Rowan as they prepared the repertoire.

"I have heard his name for many years," she said. “He is a legend in the choral world around here." She particularly liked an anecdote of the past that Shafer passed on to her. When composer Aaron Copland came to work with the students, Shafer took him to the Marco Polo restaurant. Copland only asked if they had franks and beans. She says, "He just wanted a hot dog!"

A few days later, Copland himself conducted the Madison choir in his famous and ferociously difficult and a cappella “In the Beginning” in a special concert in 1975 honoring the bicentennial of the United States, in the Kennedy Center Concert Hall.