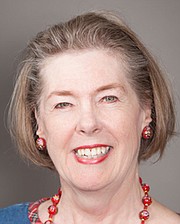 The Dulles Regional Chamber of Commerce announces that Eileen Curtis will retire as President & CEO of the Dulles Regional Chamber of Commerce in mid July 2017, after a successor is chosen. Eileen has served as the Chamber’s President & CEO since 1994, one of the longest terms of presently serving Chamber presidents in the United States. Under her leadership, the Chamber has grown into one of the largest chambers in the Greater Washington, D.C., area.

“Eileen has meant so much more to this Chamber than being its president. She has served the Chamber and our community for 23 years with professionalism, grace and a deep desire to see the Dulles area grow into the vibrant community we have now. We are all better people for knowing her as both a colleague and a friend," said James Lawson, Chairman of the Board, Dulles Regional Chamber of Commerce.

“I am so humbled to have been able to work closely with Eileen over the last five years. She is a leader, a visionary, a good friend, and one of the most enthusiastic and positive people I know,” added Bob Gangi, former Chairman of the Board and a Senior Vice President of Citibank. “This is the beginning of another great phase of her life, and I’m excited to see what great things she’ll do next!”

“Herndon’s business community has directly benefited from Eileen’s energetic, progressive stewardship of the Chamber over these many years,” said Town of Herndon Mayor Lisa Merkel. “I speak for a grateful community in wishing her all the best in her retirement.”

"My company has been a chamber member for our entire existence, thanks to Eileen Curtis," said Jeff W. Dick, Chairman and CEO of MainStreet Bank. "Eileen is incredible, with her positive can-do attitude and her magnificent grace. We have benefited both as a business and as a community from her wisdom, her compassion and her leadership."

“A leader is open minded. A leader opens discussions with ‘Yes – let’s talk about that,’ and ‘I hear you.’ Eileen Curtis is and always has been a leader,” said Jay Garant, Director, Business and Community Partnerships, Fairfax County Public Schools. “She’s marshalled the energy and collective resources to better our community. We celebrate Eileen’s accomplishments but only welcome her retirement knowing she leaves behind a culture of doing community good.”

Curtis is a graduate of the U.S. Chamber’s Institute of Organization Management and of Leadership Fairfax. She has been recognized as Woman of the Year by the Herndon Business & Professional Women and as Chamber Executive of the Year by the Virginia Association of Chamber of Commerce Executives. Curtis has a M.A. from the Catholic University of America and recently received a lifetime achievement award from Caldwell University.

During her 23-year tenure at the Dulles Chamber, Curtis has been at the helm in addressing 21st century issues, including workforce and STEM (Science, Technology, Engineering, Math), diversity and biotech. She launched Innovate, an annual one-day conference welcoming the economic opportunities of change.

Curtis developed partnerships with six area high schools, including an alternative high school, helping students prepare to be the workforce of tomorrow.

She persuaded her Chamber Board to embrace a platform of immigration reform — the only chamber in Virginia or in the D.C. metro area to do so, except for the U.S. Chamber of Commerce.

Prior to her time at Dulles Chamber of Commerce, Curtis served as Director of Music and Cultural Affairs for WGMS Radio, where she was awarded the Silver Medal for the Arts from the Government of Austria. She helped produce the event on the Washington Mall that welcomed home the Iran hostages. She was awarded numerous national awards, including the Peabody Award for Broadcast Journalism.

“Twenty-three years ago, a bright and confident woman came to our Herndon Chamber mixer sporting a name badge that read, ‘Eileen Curtis, Job Seeker.’ Our Board President, Bob Galloway, was impressed, and we hired her to be the new ‘Executive Director of the Herndon Chamber of Commerce.’ Eileen has personally spotlighted and supported thousands of Chamber members so that we have become the leaders in our fields, and at the same time she asked us to find ways to give back to the community by supporting our youth and the needs of our 50 nonprofits. All of us who have served under her leadership consider her a special friend, a relentless go-getter and optimist, and an innovator whose creativity is limitless. She may step down as ‘President’ of the DRCC, but she will never retire in the traditional sense. You can bet that her next chapter will be as fascinating as all the ones that came before!”