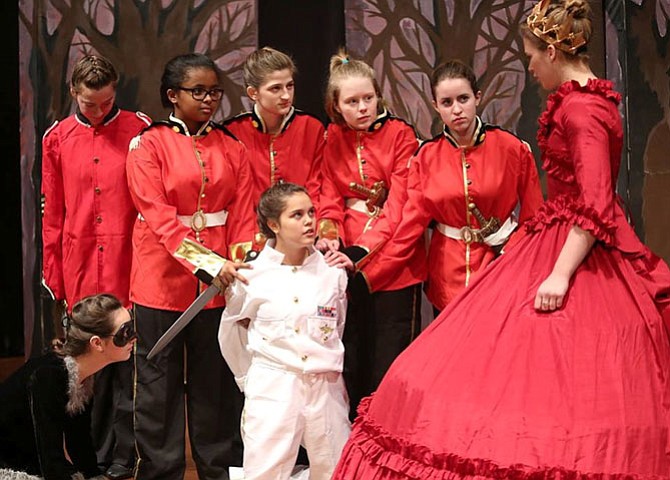 Look deep into the mirror, and you may find a whole new world on the other side. But if you wish to come back home, let fantasy be your guide. With the touch of a reflection, Oakcrest High School plunges into the mysterious world of “Through the Looking Glass” and comes out singing.

“Through the Looking Glass” tells the story of Alice’s return to Wonderland, only to find herself caught in the middle of a war between the Red and White Kingdoms, with the Red Queen at the helm. Alice must make her way across the chessboard land and save the game that keeps these kingdoms alive before time runs out. The story was directly adapted from Lewis Carroll’s original novel, with book and lyrics by Chris Blackwood, and music by Piers Chater Robinson.

As the young heroine Alice, Kiley Hatch portrayed a more flighty version of the beloved protagonist, which accentuated her childlike innocence. Alice’s journey was fraught with peril thanks to the unstoppable force that was the Red Queen, played by Clare Kolasch. Kolasch physically dominated every scene she was in, using her body to emphasize every action, practically trembling with rage at the mere mention of Alice in her court room.

As Alice’s guide through Wonderland, the White Knight (Patricia Cuenca) added humor to the narrative, which helped flesh out the ridiculousness of Wonderland. Cuenca’s off-beat dance moves during songs like “Oh Frabjous Day” and interactions with her wooden horse Checkers were a delight to watch. Also providing some fun to the fantasy, Brigid Kilner flourished as the White King. Kilner and Cuenca’s ability to adapt to a more masculine character and lower singing octave made them both standout performances.

As a whole, the ensemble of the show provided whimsy and wonder to the plot. During the act-ending song “The Claws that Catch” the ensemble of the Red Court worked together to provide cohesive movements that expressed the fear of what the Red Queen had planned as well as the power of the monster about to be unleashed. The performance was also heightened by the Red Queen’s vocals, which were as powerful and domineering as she was. Although there were some issues with diction throughout the show, the emotion of all onstage helped convey the stakes at hand, and otherworldly harmonies from actors not onstage helped emphasize the fantasy of Wonderland.

The tech for this show was clean and consistent. Sound had the daunting task of micing a great number of cast members, but overall kept the balance so that no one singer overpowered others. The set design was minimal, with prism-like structures featuring different backdrops on each side, and the effect was positive in that the sets led themselves to slightly shorter transitions between scenes.

“Without balance all is lost,” said the White Knight to Alice during a difficult part of their journey. Such is the case for the entire show, however the actors and crew of Oakcrest’s “Through the Looking Glass” achieved the perfect balance of oddity and reality, making their journey a delightful one.