Budgets, education, economic climate, immigration and Metro all on the agenda. 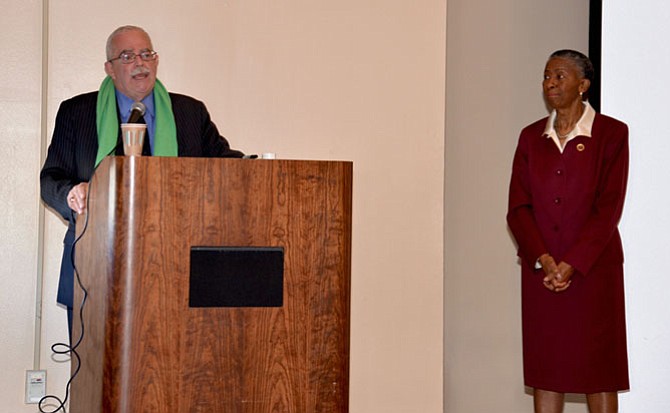 Fairfax County Board of Supervisors Chairman Sharon Bulova answers a question from the public. Kristin Michaels from Fairfax County Public Schools is at the podium to talk about the FY 2018 county school budget.

To Participate in Budget Hearings

The Advertised Budget Plan is available the county website at www.fairfaxcounty.... Public hearings on the FY 2018 budget will be held at the Government Center on April 4, April 5, and April 6. Supervisor Hudgins urged residents to attend and to stay informed. To register to speak at a public hearing, call the Clerk to the Board’s Office at 703-324-3151. The form to sign up can be found at www.fairfaxcounty.... Written testimony can be sent by email to the Clerk at clerktothebos@fai....

Hunter Mill District Supervisor Cathy Hudgins held a community summit on Saturday, March 4 at the Frying Pan Park Visitors Center in Herndon. The chief order of business for the gathering was to present the Fairfax County FY 2018 Advertised Budget Plan to residents of the district, which includes Reston, the Town of Vienna, parts of Herndon, Oak Hill, and Tysons Corner.

County Executive Ed Long was on hand to make the financial presentation and field questions, but before he took to the podium, Hudgins welcomed her constituents and introduced guest speakers U.S. Rep. Gerry Connolly (D-11), Sharon Bulova, Chairman, Fairfax County Board of Supervisors and Tara Voight, Council Member from the Town of Vienna.

Connolly started things off by giving an overview of some of the recent happenings in Washington. “We will feel it,” said Connolly, referring to the freeze on government hiring, the possibility of another round of sequestration, and President Donald Trump’s announced plans to increase the military’s funding by $54 billion. Spending on the military side “means commensurate cuts on the civilian side,” said the Congressman.

Northern Virginia is the 3rd largest region for federal contracts in the nation, Connolly told the audience. A major loss in that employment generator would have an enormous, negative ripple effect on the local economy.

CONNOLLY WENT ON to list a few of the agencies and services that are facing substantial decreases in federal funding, including the National Oceanic and Atmospheric Administration. “You know. The folks who track our weather patterns, who watch out for hurricanes, blizzards” and other climatological events, he added, “helping us make important decisions and preparations.”

Funding for the Chesapeake Bay clean-up, a state/federal project begun in 2010 which has shown remarkable success in restoring water quality and improved the regional economy with significant job creation, has also been earmarked for a potential massive cut with the proposed downsizing of the Environmental Protection Agency by 20 percent. The restoration work could see a 93 percent cut, from $72 million to $5 million.

The Congressman also touched on the topic of Immigration, citing his attendance at Dulles airport following Trump’s Executive Order that effectively established a travel ban for people from seven Muslim-majority countries. Connolly assisted in securing the release of an “American hero,” a woman who had assisted the U.S. military in Iraq.

Citing statistics that highlight the positive effect that immigrants and diversity have had on the county, Connolly said that “Fairfax has made it work by including everyone.”

Connolly, Hudgins, Bulova and Long all had something to say about Metro. Reston already has one of the Silver Line Stations at Wiehle-Reston. Before the project is complete, Hunter Mill will have two more stations in the district, with an increased responsibility for their care and upkeep.

County Executive Long said that Metro funding was workable in the FY 2018 budget, but that the following year posed a serious problem, since Northern Virginia would be picking up a larger portion of the operational tab. “The Feds have got to step up” and help break what Connolly called a vicious cycle of increasing fees, perceived poor service and reliability issues. Federal funding is made available for capital improvements to Metro, but Connolly pointed out that operational and maintenance monies are all up to the local jurisdictions — something that he said was unique to our area and placed an “unsustainable burden” on the region, especially since Fairfax County by Virginia law cannot create tax-based revenue sources and must continue to rely on real estate and property taxes to replenish the budget coffers.

Chairman Bulova highlighted a few successes that the county has chalked up, including the Diversion First Program, which seeks to offer alternatives to incarceration for persons with mental or developmental disabilities who “come into contact with the criminal justice system for low level offenses.”

Bulova also announced that the Board had appointed nine residents to the newly established Police Civilian Review Panel at their last meeting. The panel was part of the recommendations made by the Ad Hoc Police Practices Review Commission in October of 2015.

The panel is made up of a “group…with impressive skillsets,” she stated. “They will offer…further transparency…and a separate portal for the community’s voice to be heard.”

AFTER BULOVA’S COMMENTS, the County Executive took over and with PowerPoint slides and a Citizen’s Guide pamphlet as communication tools, guided the attendees through the process, the driving factors, the timeline, and the specific disbursements in the county’s $4.1 billion General Fund budget.

The Citizen’s Guide presents the amounts being directed to various needs, departments and services, along with a brief narrative that details what the monies are used for. It also includes some historical information for, and explains where certain funds are required by law and/or contract or obligatory debt service.

Long highlighted items that were not being funded in the “net neutral” budget plan, such as the second year of additional funding for the Diversion First program. He also pointed out areas where funds were provided that fell short of the requests made by their recipients. The largest gap of note was in the transfer to the Fairfax County Public Schools (FCPS) Operating Fund. Even though the Advertised Budget includes an increase of $51.69 million over FY 2017, that number is almost $61 million less than what has been requested by the FCPS Board.

There were plenty of comments and queries from the audience. “Why not just ask for a dollar more per month in the real estate assessments?” asked one woman. Long replied that after the increases of the prior year, the softening of the housing market, and the decisive defeat of the proposed Meals Tax Referendum during the November elections, it was determined that maintaining the tax rate at $1.13 dollars per $100 of assessed property value was advisable.

Long also said that the FY 2019 outlook was such that it was best to budget conservatively this year and continue to prepare for the future.

Following Long’s presentation and a question and answer and public commentary session, Kristin Michaels, FCPS Assistant Superintendent for Financial Services provided an overview of the FY 2017 Budget for the county’s schools.

When one resident questioned the collaboration between the county’s Board of Supervisors and the school board, and why the budget process didn’t start until January, Chairman Bulova responded that the two boards “have a stronger working relationship than ever before.” The county board and the school board participated in a joint retreat in 2016 to “better know each other” and to brainstorm on ways to support education in the community.

“And the budget happens all year long,” she added. According to Bulova, almost immediately after the adoption of one budget, work begins on how to achieve the financial goals of the next year and beyond. To additional comments, Bulova acknowledged that the county could do better when communicating with residents. “I just have started a Council on communications and public engagement,” she said. The Council focuses primarily on land use issues, but Bulova said that the recommendations for improved communications would no doubt be applicable to all interaction between the county and its residents.

Attendee Leila Gordon, the executive director of the Reston Community Center, commented that in this community there was a strong spirit of partnership, but that what was needed was not to think only about where to find more money, but how to do things differently. It was time to utilize a more holistic approach to solving our problems and “bring fresh voices and ideas. Think big picture and how each action relates to all families in the region.”

After a break and a presentation by Sookyun Oh, D.C. area director of the National Korean American Service and Education Consortium on using a “lens of equity” when developing a budget, the remaining audience members were given a chance to participate in a “Build-a-Budget” exercise.

Wireless electronic polling devices were distributed. Supervisor Hudgins read a series of questions asking the public to make decisions about building a balanced budget for the county. The participants all seemed eager to answer and sometimes surprised by their collective answers.

SEVENTY-FOUR PERCENT of the respondents voted to adjust the tax rate to allow for “providing excellent services for every resident of Fairfax,” yet, at the same time, 40.31 percent expressed their overall approval of the budget as it was presented, despite the items that could not be funded, or the gap in the funding request by the School Board.

Later in the survey, almost 41 percent said that they would support an increase to fully fund the schools transfer request and county services.

Thirty-three percent indicated a loss of confidence in Metro and said they would need to see significant improvements in several areas before supporting additional funding, while 44.44 percent acknowledged the Metro problems, but said they would still support increased funding, even if it meant more taxes.

A lack of affordable housing in the region had been mentioned by several of the speakers and by members of the public. During the budget exercise, 36.58 percent agreed that they would support the re-establishment of the $.01 housing tax. The majority, 57.05 percent, preferred to see an increase in the developers’ contribution to support affordable housing.

During the activity, a number of the participants shouted out “Is there another option?” when answering a particular survey question. Several noted at the conclusion that picking a priority was more difficult than they would have originally thought.

Hudgins thanked them, saying their participation served to illustrate the difficulties in building a budget for the good of all citizens with the funds available, and also provided additional valuable input for consideration as the budget process continues through the call for adoption at the Board of Supervisors meeting on May 2.

UPDATE: Corrected to reflect that Leila Gordon is the executive director of the Reston Community Center.