A progressive Vermonter in Old Town

Chester Kasnowski is what they call in U.S. government parlance a “trailing 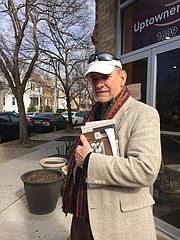 Chester Kasnowski in front of the Uptowner Cafe on King Street.

spouse.” His wife has a job as an analyst in program management and gets relocated fairly often. Her current gig with the USG brought her to Washington, D.C. and Kasnowski came along to see if the area had changed much since he was last here about 30 years ago. It had.

Kasnowski, a 50-ish painter with a neat beard and a sketchbook under his arm, is pleased to arrive at the Uptowner Cafe, a local sandwich shop on King Street with good coffee, warmth, and community atmosphere. “Nice place,” he said. “Good to know about.”

He has lived in Alexandria three years. He returns to Vermont mid-summer and stays a few months, then returns, refreshed. He was chair of the Vermont Progressive Party in his town of Weston, Vermont, which is also the home of the Vermont Country Store. The current lieutenant governor, David Zuckerman, is a Progressive, he notes. Weston has been his home town for the past 30 years. He used to be a Democrat, but he became disillusioned with the “elitism” of the Democratic Party. He says that was about the same time Bill Clinton got elected. The Vermont Progressive Party originated when Bernie Sanders ran for Mayor of Burlington. Sanders never officially associated himself with the Progressive Party, although the Progressives were among his biggest supporters, and Kasnowski decided to work with the new party.

Kasnowski was initially involved in the campaign to elect Hillary Clinton, because although he liked Bernie Sanders, he didn’t think Bernie could make it all the way to the White House. He wasn’t very enthusiastic, however, about “business as usual” in the Democratic campaign. It was hard to muster enthusiasm, and Kasnowski was busy painting. He has done a show at the Workhouse in Lorton where he also teaches art, has students at the Smithsonian, and can often be found painting boats at the marina on Daingerfield Island. He loves painting boats, and sometimes, the owner comes along and sees the painting and wants to buy it.

When President Trump was elected, Kasnowski said to himself, “Well, you’re in Washington, D.C. and there is an inauguration. Why not go? When else would we ever do this?” He called U.S. Sen. Patrick Leahy’s office, and was told he could get tickets from the senator’s office.

So how was it?“There we were in a sea of red hats. We got within a few hundred yards of the podium, on the side. But then every time someone was announced who wasn’t a Republican, the crowd started booing and cursing. I mean, really bad language and very aggressive,” Kasnowski said. He and his wife left early, before the new president made his speech.

Kasnowski grew up in New York City and Vermont. He can hardly wait to get back to Vermont when the time comes, but he really likes Alexandria. “In Vermont,” he says, “you have to drive 20 minutes to get to a restaurant and it’s not very good; you might get a burger. Here, they have a strange custom: you can get carry out pizza.” And French restaurants. Kasnowski says in Vermont, the closest French restaurant is 90 miles away in Albany. In Old Town, they are everywhere. But in Vermont, he says, it’s quiet and very green. His favorite thing to do when he gets home is to just walk out in back of his house and sit by the woods, watching the beauty of the place.

What does he think about the new government and things like the EPA changes? A Vermonter would care about climate change. “Well,” says Kasnowski, “New York is cleaner than it was 30 years ago, Washington, D.C. is cleaner than it was 30 years ago, the Chesapeake Bay is cleaner than it was 30 years ago, but we have had government in and out of office who cared more or less about the environment. So, changes in government … I don’t think they really make that much of a difference overall. And anyway, since when did we expect government to solve all our problems?” Up in Vermont, he says, they have their own little “Republican Convention” at the gas station every morning. He goes there for coffee or the paper or gas, and there is a group of locals, plumbers, painters, farmers, and others who go there to have a cup of coffee and talk about the situation in the country. He’s in the minority but it doesn’t matter. The discourse is civil.

For Kasnowski, what’s important now, he says, is: “How do we keep this progressive excitement going?” He is pleased at the activism he is seeing among young and old, trying to get out the vote and change how the Democrats approach the next election. Finally, people are beginning to use the word progressive, and that makes Kasnowski happy.