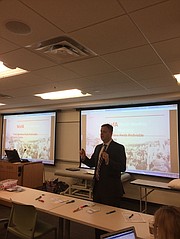 There are 12 #Indivisible groups that have formed to date in Arlington, of which WofA is one of the largest with almost 1,000 members. #Indivisible was formed by a group of congressional staffers who wanted to resist some of the policies of the Trump Administration. Since they had learned from Tea Party activists on the Hill, WofA follows the model with its own action teams. WofA VA was started by Micaela Pond, a teacher at Key Elementary School, and meets on the first Monday of the month in Arlington. WofA is looking for volunteers to engage on voting and elections, finding common ground with non-Democrats, reaching out to youth to understand what 18-plus year olds want, and dissecting the issues to understand what makes Virginia's voters tick. They have a “weekly blast” on their website which provides suggestions on what people can do on any given week to be effective. To learn more, or to join the group, or find out where meetings are held, see www.wofava.org, write to wofava@gmail.com, see facebook We of Action VIrginia, or visit twitter @wofava.

• Elections for the office of Virginia House of Delegates will take place in 2017. The general election will be held on Nov. 7. All 100 House seats are up for election in 2017. No other state has this large a turnover in 2017. Virginia state delegates serve 2 year terms with all seats up for election every two years.

• Republicans have maintained control of the chamber since gaining a majority in 1999.

Almost 100 residents gathered on Monday, March 6, as members of “We of Action Virginia” (WofA), a group of Arlington men and women who are working to pursue political change in the wake of the 2016 election. But first, they had to sing happy birthday to Del. Patrick Hope (D-47), in harmony.

Hope called the upcoming General Assembly election the first referendum on the Trump administration’s policies. No other state has as many delegates up for election in 2017. The problem, he said, was that many Virginians don’t vote in uneven years. Hope said the would like this to be the year to turn the General Assembly around. “We have the wind at our backs,” he said. “Thanks to the folks across the river, we’ve had to do very little to find delegates willing to run for the Virginia General Assembly.”

Hope told WofA it has been a fairly typical year in Richmond. “You will see bills that are anti-women, anti-immigrant, anti-reproductive rights. It’s important to remember these divisive bills are introduced not to turn into law but to send a message. Each side tries to motivate its voters and activists.”

“But,” Hope said, “Governor McAuliffe brags about setting the record for vetoes, and we can sustain his vetoes because we have enough delegates. We are 34 delegates now but if we can get to 43, the entire conversation changes.”

Hope urged the WofA activists to remind Virginians to vote in the upcoming elections. “The state does more to you or for you than the national government does,” he said. “Transportation, public schools, health care, environment … it’s all state.”

Hope urged those at the meeting to write checks to help candidates if they want to see things like Medicaid expansion and more school funding. “But if you get people calling you for money, don’t just write a check to them,” he said. “Do what I do: I give my money to the House Democratic Caucus, because they know which races can be won and need money.”

Hope pointed out there are crucial races in Fairfax, Loudoun, and Prince William counties which need to be tracked. There are 17 Republicans who sit in seats that backed Clinton last year, Hope said. There are 6 or 7 very important, close races that need to be won. The Republican in the bluest seat is James LeMunyon, who represents the 67th House District, a Northern Virginia district that Clinton carried 60-34.

He told WofA there are too many people who don’t realize they have to come out and vote. “Knock on doors and make phone calls. Register them to vote. Make sure everyone knows who their delegate and state senator are.”

Hope spoke with some frustration about the health care issue. “There are 400,000 Virginians who did not have access to affordable health care last year,” he said. During the years we have tried to expand Medicaid, we know Virginians have died, waiting for that health care.”

Hope said another major issue for the upcoming assembly is redistricting. The party in control of the General Assembly gets to draw their own maps for voting purposes and then it becomes a law that has to be voted on by both sides. It will be important to make sure that those changes don’t take place without strong resistance. He urged the attendees to check www.bluevirignia.org (this website is under construction) for upcoming races that are considered important to the Democrats. He also applauded Lt. Gov. Ralph Northam’s battle cry: “I won’t sign any legislation that is partisan.”

Most important, Hope said, remember to talk to VIrginians and find out what it is they want. There are more important bread and butter issues to talk about that people can find common ground on, like jobs and energy, which affect people’s income. Many people in Virginia depend on the coal industry as a livelihood and need to hear there is a plan to replace those jobs with other jobs they can do. He reminded those who had supported Hillary Clinton that the slogan had been ‘I’m with her’ but Donald Trump’s slogan had been ‘I’m with you.’”