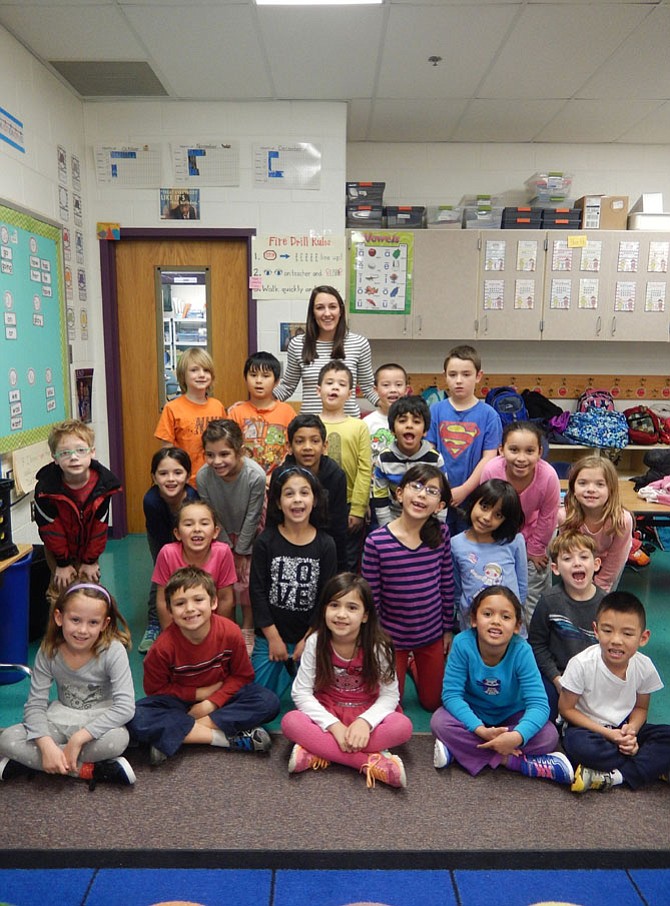 Annalise Lucas and Elly Vintilescu work on their obstacle together.

Claire Dorney inspects her obstacle from the ground up. 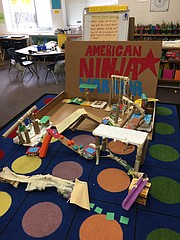 The final layout of the students’ completed obstacle course.

Inspiration can come from many places and, for Daniels Run Elementary teacher Vicky Novak, it was spurred by a conversation between two of her first-grade students.

“At snack time, they were talking about [the TV show] ‘American Ninja Warrior’ and that sparked an idea in me,” she said. “I was just about to teach them how to identify and create shapes, and I thought this would be a way to have them think about shapes from an engineering point of view.”

Soon afterward, the students made their very own obstacles, similar to the ones seen on the show — except on a much smaller scale. And along the way, they learned about shapes and had fun doing so.

“There’s a new way to teach kids using project-based learning,” said Novak. “You present a project to them and they come up with what they need to do to complete it. One of our math standards is teaching about shapes by identifying them in the environment. So their challenge was seeing how they could use shapes in the environment to create obstacles for the next season of ‘American Ninja Warrior.’”

First, the children studied videos of participants going through the show’s obstacle course. Then they discussed the shapes they saw and how each shape helped the people get through the course. “They saw, for example, how they could use circular hooks to get across, rectangles to slide down and how circles made moving harder because they spin,” said Novak.

Next, the students went to their school’s Innovation Space, which debuted this school year. “It’s an amazing room where the kids can create things,” said Novak. “Our Innovation Space teacher is Mia Leone, who worked with us, along with retired engineer Alan Friedman, who volunteered his time to help.”

Friedman taught the children about several, different, engineering components, such as rough and smooth surfaces, inclined planes, ramps, rings and bars, ropes, cylinders, walls, steps and beams. They learned which ones would work best in particular situations to propel a person forward.

“So based on all this information, plus the shapes they know, they had to design on paper their ideas for obstacles,” said Novak. “Each child created one obstacle and, after doing their drafts, they teamed up with another student. They then compared what each had created and decided to either go forward with one or the other design or to combine them to make a new design.”

One of the three adults had to approve the students’ final designs. Then the next day, the children returned to the Innovation Space and received unlimited materials with which to build their obstacles. These included cardboard sheets and tubes, Styrofoam, pipe cleaners, yarn and lots of masking tape to keep everything together.

The finished obstacles ranged from 1 to 2 feet in size. “Then we talked about how to map out a course so the American Ninja Warriors could actually use these obstacles,” said Novak. “They created an entire course, and we walked a little plastic teddy bear through it to make sure it worked and flowed the right way.”

The students also had to adjust their positioning of the obstacles so they’d end up being near others of the same height. “It was like a puzzle,” said Novak. “And the finished product was really cool.”

Next, the children presented their obstacle course to volunteers playing the roles of “American Ninja Warrior” producers. “They had to tell what shapes they used and explain how their obstacle worked,” said Novak. “They also had to say why their course should be chosen for the next season of the show.”

Previously, Novak had touched base with the program’s real producers. “Before the season started, I ran the idea by Mia, and she said I should contact ‘American Ninja Warrior,’” said Novak. “So I sent a message to one of their producers via their Facebook page, and they responded the next day and asked how they could help. So I asked if they could present the challenge to us.”

In project-based learning, someone first presents the project. So the show’s host, Matt Iseman, sent a video to Novak’s first-graders challenging each of them to create an innovative obstacle. After they did so, their teacher photographed each obstacle and sent them to her contact at the program. That person then wrote an article about the children’s efforts for the blog that goes with “American Ninja Warrior’s” Facebook page. “It came out, the beginning of February, and the kids loved seeing it,” said Novak.

BUT HER FAVORITE PART of the project was “seeing how engaged they were in the process and in their own learning. Besides learning about shapes, they also learned some engineering concepts, communication skills, decision-making, creativity, perseverance, critical thinking and teamwork. This was more of a real-world project; the kids figured out how they could get something done, and they really took an active role in their own education.”

Claire Dorney, 7, made a ramp out of a piece of cardboard, paper and cardboard tubes. “The hardest part was getting it to stand,” she said. “But I liked helping my partner, Grace, make it stand. We put the tube under the cardboard ramp. It was fun because we got to be creative, and I love being creative.”

Also enjoying himself was Dhanava Dowla, 6. “People had to jump and climb and slide through my obstacle,” he said. “I used foam and half of a swimming noodle and some string. I really like inventing stuff, so I got really excited when I heard we were going to do it.”

Aidan Johnson, 6-1/2, created a rope obstacle with help from classmates Alexis, Jason and Maia. “We used origami paper for the platform, plus paper-towel rolls, yarn, tape and a couple cup holders,” said Aidan. “We cut foam into small, little pieces and put the pieces in the cup holders to make the water that people had to swing over. But if they got tired, they’d fall in. We also used a tube so people could slide onto another platform. We got to use clippers and a lot of tape; it was pretty fun and so cool.”

Meanwhile, Annalise Lucas, 6, constructed an obstacle requiring people to jump on a mat and swing on ropes. “I used cardboard for the platform; and for the ropes, I tied pipe cleaners together. The toughest part was making things stick together, and the best part was having fun. And we learned about shapes because we had to use them to build.”