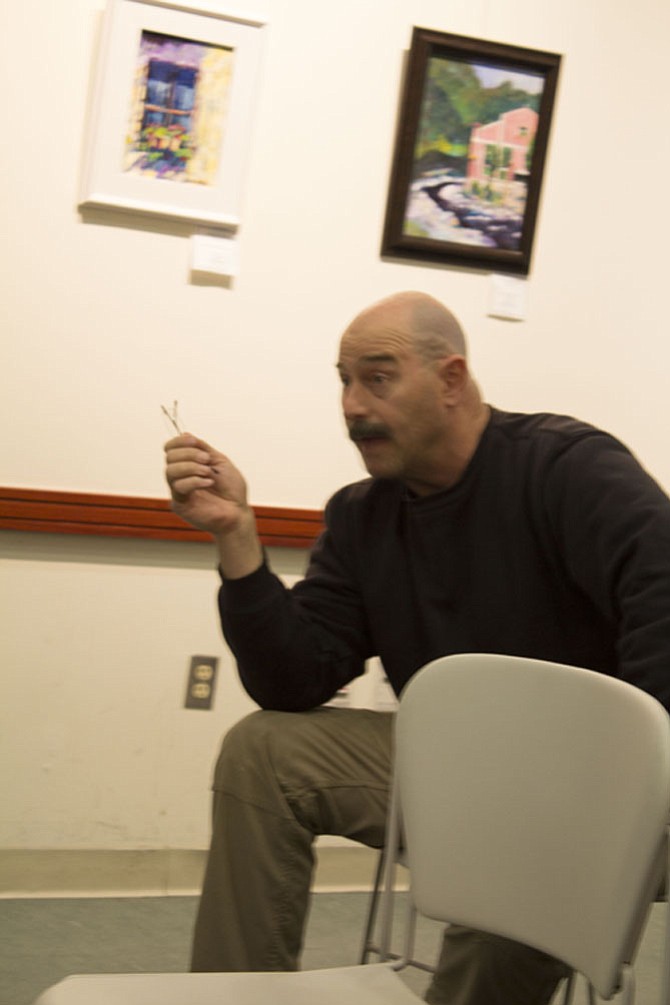 Pete Kurzenhauser of Great Falls criticized the FCPS World Languages Immersion program and suggested that it be looked at when making tough budget decisions. Photo by Fallon Forbush.

The town hall was moderated by Matthew Haley, a Great Falls Citizens Association executive board member and chair of the FCPS Budget Task Force. Participants included: Joe Mondoro, CFO for Fairfax County; Kristen Michael, assistant superintendent of financial services for the Fairfax County Public Schools; Jane Strauss, vice chair and Dranesville District representative on the FCPS Board; Jeanette Hough, member-at-large on the FCPS Board; and Supervisor John Foust, Dranesville representative on the Fairfax County Board of Supervisors.

The Fairfax County Public Schools projected a $57 million shortfall in its budget for next school year, which will impact the more than 188,000 students that are projected to be educated in the system next school year.

The town hall was moderated by Matthew Haley, an executive board member of the GFCA and chair of the FCPS Budget Task Force.

THE $2.8 BILLION fiscal year 2018 budget that the FCPS is presenting to the Board of Supervisors for the next school year is an increase of about 5 percent, or about $135 million, from the fiscal year 2017 budget.

FCPS is asking the county to provide $2 billion, or about 72 percent of the total revenue for its new budget. The request is nearly 6 percent more, or an additional $112.5 million, than it requested from the county for its fiscal year 2017 budget.

“It’s clearly, nearly all of our revenue,” Michael said during the town hall.

The problem is that FCPS’s request to the county exceeds its available revenues by more than $60 million.

When FCPS applies increased revenue from the state and federal funding, they are left with a gap of $57.4 million, Michael said.

Because of this deficit, there are $47.9 million in potential cuts or new revenue sources being considered by FCPS.

Of the more contentious ideas being considered to balance the budget are $1.2 million in cuts to programs for English for speakers of other languages.

Town hall participants had many questions about the FCPS’s $2.5 million World Languages Immersion program, including the Japanese program at Great Falls Elementary School.

“The Japanese immersion is not an expensive program,” Strauss said. “It does have an additional expense, it also has huge support among the parents.”

Both of Pete Kurzenhauser’s children went through the Japanese immersion program at Great Falls Elementary School. He also chaperoned a school trip to Japan after his students finished the sixth grade.

“We got to Japan and none of them had any conversational capabilities in Japanese,” he said. “We need to take a real hard look at the immersion programs and ask whether the value is worth the additional cost.”

He also said that a lot of students that start out in this program often drop out, which drives up the program’s cost-per-student because the students are difficult or impossible to replace.

More proposed cost-savings measures include adding $3.8 million in athletic fees and delaying the start of music programs from the fourth grade to fifth grade, which would save $2.8 million.

Another would save $22.8 million by increasing class sizes for all grade levels by one student.

This is unprecedented for the county, according to Michael.

“While they’re decreasing, we’re still concerned about the number and level of vacancies,” she said.

This includes schools in Great Falls and McLean.

“Difficulty in hiring teachers includes our schools here in Great Falls, the Langley pyramid and McLean pyramid,” Strauss said during the town hall. “Some people think, ‘Oh it must only be in schools that have challenging curriculum or issues where students come with many challenges.’ But even in this community, we have had difficulty hiring teachers.”

FCPS started a compensation study last year and found that teacher pay is “significantly below the market average” in the region, according to Michael.

That’s why the budget includes $33.2 million to increase teacher salaries. It also allocates $44 million for an increase in pay of 2.5 percent for all eligible FCPS employees.

Another factor that is increasing the budget is $45.9 million for anticipated increases in health insurance and contributions to retirement systems.

“The [pensions systems] is a great benefit for our employees and certainly rare in terms of looking at surrounding school districts,” Michael said.

On Jan. 19, the GFCA emailed a letter to Foust and Strauss voicing its concern over the county’s pension systems.

The group said the “high-benefit” pensions have been counterintuitive and argued they have not helped attract employees. Instead, their costs have eaten away at salaries.

“We strongly advocate that the county develop a full understanding of the pension changes that will be needed, adopt a strategy to implement those changes and take action in 2017 to begin that process,” the letter says. “Delaying the hard choices should no longer be an option. This statement was discussed and unanimously approved by the GFCA Executive Board.”

AMONG THE POTENTIAL reductions under consideration by the FCPS is implementing $4.7 million in reductions to its Educational Employees' Supplementary Retirement System of Fairfax County (ERFC) pension system by June.

Recommendations include lowering the interest crediting rate on all ERFC member accounts from 5 percent to 4 percent.

More changes were recommended for new or non-vested ERFC members, including instituting a minimum retirement age of 55; increasing the period for calculating the final average salary from three years to five years; and changing the cost-of-living adjustment to equal 100 percent of the Consumer Price Index with a cap of 4 percent.

Others in the crowd criticized the FCPS board members on the panel for not advocating strongly enough for the meals tax referendum, which failed in the November election.

Most of the new revenue that the meals tax would have generated would have been used to fund the FCPS and could have prevented the budget shortfall that the system is facing.

“I was a big supporter of the meals tax,” Foust said at the town hall. He told the audience that this was because continuing to depend on real estate tax is not sustainable.

“We can’t keep going to [property owners’] pockets,” he said.

The Board of Supervisors has not proposed any increases in real estate taxes, unlike last year where the residential property tax rate was raised 4 cents to $1.13 per $100 of assessed value.

However, with the slight increase in the county’s average real estate assessment, the average tax bill will increase by $40.69.

The FCPS adopted its advertised budget on Feb. 9 and will present it to the Board of Supervisors on Tuesday, April 4.

Prior to the adoption of the budget, which is planned for May 25, FCPS will have budget work sessions on Monday, March 13; Monday, April 24; Monday, May 1; and Thursday, May 18.