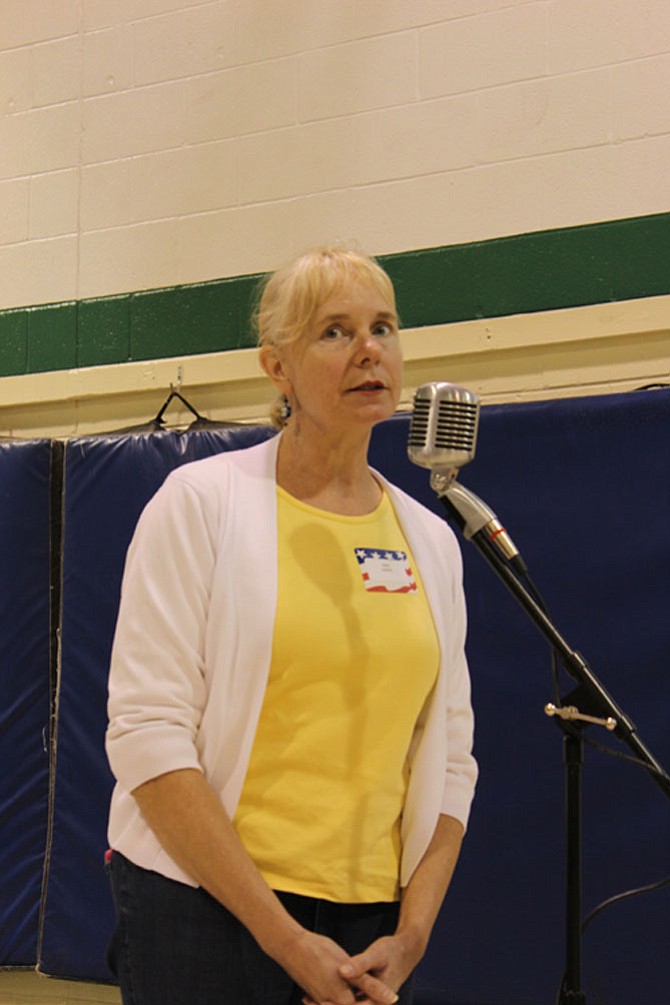 Alane Dashner of Great Falls asked how the Republican administration planned to pay for the replacement of the Affordable Care Act. Photo by Fallon Forbush.

This story has been updated.

A microphone reserved for U.S. Rep. Barbara Comstock (R-10) remained silent during a town hall meeting on Friday, Feb. 24, where 150 of her constituents gathered to question her.

Members of the Indivisible Virginia District 10 group knew that Comstock declined their invitation, but they chose to set up a mic and a paper name plate for their Congressional lawmaker to emphasize her absence.

After all, the event was scheduled during Congress’s week-long recess from Feb. 19 to Feb. 25 when federal lawmakers typically spend time meeting with constituents in their home districts.

Instead, the congresswoman attended a Catholic Charities Ball for the Diocese of Arlington at the Ritz-Carlton in Tysons, leaving organizers to fact check her public record and attempt to answer questions on her behalf.

An official invitation was given to Comstock on Tuesday, Feb. 7, according to Jan Hyland, a member of the Lovettsville Indivisible group who helped organize the in-person town hall with other members of Indivisible groups throughout northern Virginia.

Indivisible groups have been forming across the country after the publication of an “Indivisible Guide” that was created in December to help people resist the Trump administration’s agenda, according to the grassroots group’s website.

Virginia Indivisible members living in the 10th Congressional District, like Hyland, were surprised to see that Comstock announced a telephone town hall the very same day they invited her to their in-person town hall.

Individuals subscribed to Comstock’s email list received a last-minute invitation to register to participate in the call that would be taking place the following day, Wednesday, Feb. 8.

“The congresswoman hosts telephone town halls where she can talk to thousands of her constituents in a civil and conversational manner,” said Jeffrey Marschner, Comstock’s spokesperson, told the Connection in an email. “She has been doing telephone town halls since she was a delegate in 2010.”

Marschner said Comstock’s constituents appreciate the opportunity to call in from home or wherever they are and listen in at their convenience, and that she has connected with 9,000 constituents through telephone town halls.

The short notice, indirect answers from Comstock and the participant’s inability to ask followup questions left Hyland and her Indivisible peers determined that their in-person town hall was still necessary.

While the gymnasium met its small capacity that evening without Comstock, more people tuned into the event over the Web. There have been more than 1,000 views of the town hall’s live and archived Facebook Live feeds that streamed the event.

“There is a lot of hunger for engagement with representatives,” said Nathan Williams, one of the primary organizers of the Town Hall Project.

His new grassroots project has sprung up to help satisfy the demand for lawmaker’s attention and is attempting to publicize all congressional town hall and constituent events, describing itself as “dedicated to progressive values.”

“This resource should exist, in fact we were surprised it didn’t exist, that nobody had a single source of every member of Congress’ public events,” he said.

Since the project is a “labor of passion,” Williams relies on small donations and volunteer researchers from across the country who contribute to and update calendars, which can be a difficult task.

“You can’t find all of these events by going to their website or going to their Facebook page,” he said. “Some members of Congress seem to be going to great lengths to avoid making the events known.”

COMSTOCK SPENT time in the district on Wednesday, Feb. 22, speaking at a rotary club in Manassas, visiting a rehab health care facility in Gainesville and stopping into a local pharmacy to discuss healthcare issues, Marschner said. She finished the day in Great Falls by attending a law enforcement fundraiser at the Brix American Bistro.

Two telephone town halls that Comstock held this month were publicized in two emails that were sent to subscribers on her opt-in email list.

This behavior isn’t unusual, especially for Republicans who have noticed other rowdy town halls by colleagues across the country.

“We don’t have years and years of data, but we do get a sense that there are members of Congress that in the past have held in-person town halls who are now holding tele-town halls or Facebook Live events where frankly questions are typically screened,” said Williams.

“There’s a difference between listening to someone on the phone or reading a Facebook text question versus having a person look you in the eye and say, ‘I’m very concerned about losing my health insurance and I’m a real person, I’m standing here in front of you, I’m not a paid protester, I’m not a made-up Internet troll, I’m real and my concerns are real and you represent me, so what are you going to do about it,’” said Williams. “Regardless of where they are in the political spectrum, I think every member of Congress needs that face-to-face interaction with their constituents,” Williams said.

“There are cases to be made to having a tele-town hall in addition to having an in-person town hall,” he said. “Unless they can demonstrate that they are taking all questions [in a] totally open format, there is no reason to believe as a constituent that they have the same level of openness and accountability that an in-person town hall has where someone raises their hand and takes the microphone to ask their question.”

“Basically, people have a day’s notice or less to take off time from work and they’re being asked to travel into Washington to her office in D.C., not here in the actual district,” Hyland said. “There’s no reason that people who live as far away as Winchester, Clarke County or those of us out here in Lovettsville, etcetera, to have to drive out of district on a week where she’s being paid to be out here with us.”

Comstock’s office is currently polling constituents over email about their stances on issues. On Feb. 15, subscribers to her email list received a short online “Issues Survey.”

“I would like to know which issues are most important to you and what issues you feel should be addressed?” her email read.

She asked recipients to react to policy statements by checking one of three options by each statement: “Agree,” “Disagree” or “No Opinion.”