Reston Soccer Field Proposal Gets Kicked Off the Table
Votes

Reston Soccer Field Proposal Gets Kicked Off the Table 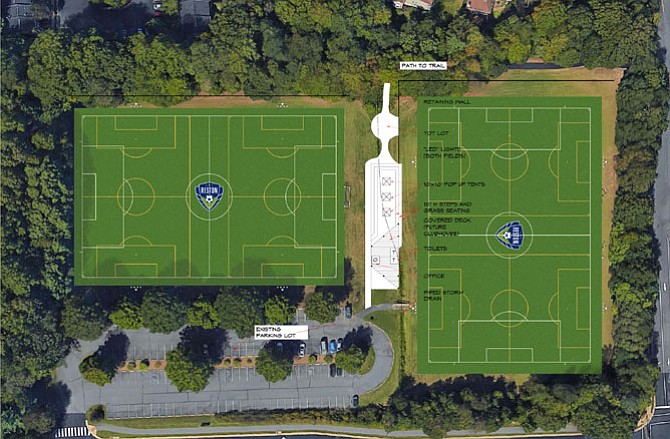 The Reston Association Board of Directors voted to kill a proposal by the Reston Soccer Association to fund the renovation of the Lake Newport Soccer Park on Reston Parkway.

The RSA has been seeking approval from the RA to raise funds to pay for improvements to the field since October 2016, when it first presented its ideas the RA Board of Directors during a public meeting.

The RSA proposed to:

The nonprofit soccer organization does not own any soccer fields, so it uses county facilities and rents out RA parks for its members to play. The two fields at the Lake Newport Soccer Park are the ones the organization uses the most.

After the initial meeting where RSA presented its idea to the RA Board in October 2016, the RA board directed staff members of the association to begin collecting input from its various advisory committees.

While the proposal was on public meeting agendas for the RA Board and various committees, mailed letters were not sent to abutting homeowners until this month.

The RA’s original timeline was to vote on whether to grant a referendum for the proposal as soon as this spring. But that changed when the RA gathered abutting homeowners from Concord Green, Arbor Glen and Bayfield Station for a community input meeting on Wednesday, Feb. 8.

TEMPERS FLARED during the public meeting, with several angry participants refusing to provide their names for the record or speak at the podium. Instead, they stood and shouted from their seats at RA CEO Cate Fulkerson, who moderated the meeting.

“I don’t think this is fair,” said, Eric McErlain, president of the Bayfield Station Homeowners Association. “I think we’ve been ambushed.”

McErlain, whose home is about 50 feet away from one of the fields, did not hear about the proposal until the morning on Feb. 4 when he got an email from his next-door neighbor. This neighbor had forwarded a letter that the RA had mailed.

“This project has been signed, sealed and delivered and these last three or four meetings will just be perfunctory,” McErlain said. “In their minds, they’ve already approved this.”

According to McErlain, his letter was dated Jan. 27 and postmarked on Jan. 30, but he didn’t receive the letter until Feb. 3.

“I have no evidence that this was slow-walked or anything, but optically it’s terrible,” he said. “It really feels like we’re subject to a surprise attack here.”

Roberto Anguizola, president of the RSA, was shocked by the reception that he received at the community meeting. This is because his organization has proposed making the soccer fields better for the community without asking anyone to pay for the work. The RSA would have taken the responsibility for all the fundraising.

“Many of them were hearing about our vision for the park for the first time,” Anguizola said. “There are some valid concerns.”

In addition to feeling rushed about the proposal, there was concern over adding lights to the fields over fear they would extend play time into late hours and give off an intrusive glow.

Neighbors were also opposed to removing the natural, green grass.

However, Anguizola thinks LED technology and other compromises, such as time restrictions, could be made that would address these concerns.

McErlain and others also alleged that Anguizola’s run for the RA Board is another sign that the decision to approve the referendum has already been baked in prior to engaging with the community.

Anguizola is one of six candidates running for the at-large RA Board seat in the RA’s spring election where voting will take place from March 6 to April 3.

“It would be a conflict,” Anguizola said. “I would disclose that and have already done that by the fact my candidate statement includes the fact that I’m the president of Reston Soccer on it.”

The fact that RA Board members have conflicts or potential conflicts of interest are not unusual, he said.

“It’s important to understand that anybody that you would want to be on the board of the Reston Association is heavily involved in the community or a leadership role in some capacity,” he said.

If he wins the election and the RA board picks the proposal back up, he said he would recuse himself from making any decisions or votes on the proposal.

ANOTHER ASPECT of timing that bothered McErlain and his neighbors was RSA’s announcement of a partnership hours prior to the community meeting.

On the same day of the community input meeting, the RSA announced that it had finalized an agreement to partner with the Washington Spirit, a National Women’s Soccer League team based in Germantown, Md.

The two organizations jointly announced that it would share resources to base a U.S. Soccer Girls’ Development Academy in Reston, beginning this summer.

But Anguizola is adamant that this development has nothing to do with the proposal.

A soccer academy is a method of teaching soccer, not a facility, according to Anguizola.

“You might have three or four different teams and they work together,” he said. “It lets you leverage the coaching staff and facilitate scrimmages.”

Washington Spirit will not be using the Lake Newport field or any RA field any time soon because they require using synthetic turf fields.

“We’re likely going to work with the Washington Spirit on one of the existing Fairfax County turf facilities,” Anguizola said. “It’s really great for the young girls because we’re going to have these great role models and a world-class soccer program focused on girls. That was frankly a weakness for Reston Soccer, so we’re really thankful to partner with them.”

When the RA board revisited the proposal’s timeline at its Thursday, Feb. 23, community members flooded the meeting to speak out against the proposal, most asking to get rid of it entirely.

Some of these members were part of a group of Restonians that McErlain had formed to oppose the plan, the “Preserve Newport Fields” coalition.

The opponent testimony and public outbursts were successful.

Julie Bitzer, South Lakes District RA board director, asked the board to remove the proposal from consideration indefinitely.

“I don’t want to see the tail wagging the dog,” Bitzer said during the meeting. “It’s our land, it’s our community’s land, everyone who’s a member of Reston Association, it’s your facility, it’s our land and we all should have input into what happens to our facilities.”

While the only board member to vote against the motion was At-Large Director Ray Wedell, other board members had mixed feelings about shutting the process down entirely.

“The amenities that were created in 1968 are not going to meet the needs of the community in 2025, they’re just not,” said Jeff Thomas, at-large RA board director, during the meeting.

He also told the audience that he was surprised at how heated the dialogue became during the meeting and asked for people to reconsider their close-minded approach to engaging in conversations about innovative ideas.

“We know we’re going to have to make upgrades to facilities across Reston and we know that members don’t want to pay new, increased assessments, so we need to be thinking creatively about partnerships that we could pursue,” he said.

“While I appreciate the passion that people have for their neighborhoods, I think that it’s really kind of horrifying to hear people accuse our CEO of underhanded activities,” she said during the meeting. “I’m glad to see [the proposal] move off the table, but agree … we do need to be able to talk about things.”

The park has existed at its current location since before 1980, according to Mike Leone, an RA spokesperson.

The study also recommended for RA to be prepared to allocate $487,186 of reserve funding for the replacement of both grass fields.