Movement started as a Google Doc has taken off. 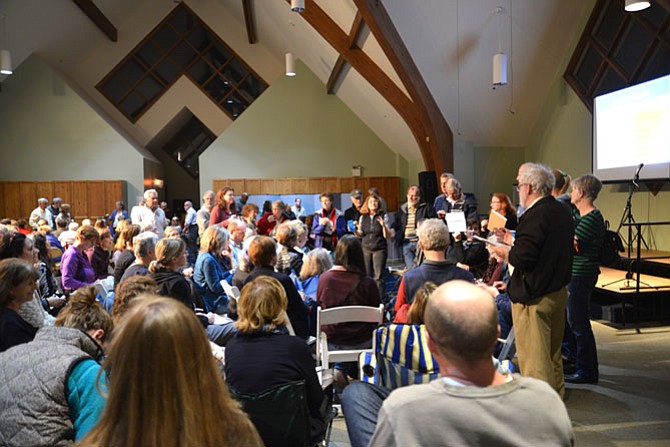 “None of this is OK with me. I was raised in Germany. I studied history. I know where this can lead.”

“We’re getting involved to care for others who are not ourselves.” Robert and Jill Garcia of Herndon lead a focus group to their working digs at the Herndon-Reston Indivisible meeting.

From left: Nikki Pugh of Germany and Lyndsay Nelson of Reston. Nelson was raised in Germany. “I studied history. I’m here because I know where this can lead," she said, speaking about immigration bans and attacks on free press, among other issues.

The Indivisible movement. It started as a Google Doc guide. A few progressive former congressional staffers joined forces to provide information on the workings of government and provide practical advice on how to resist a Trump administration that they see as threatening to the core values of America. Since they sent their guide out into the world via Twitter, 4,500 local groups have formed around them and around the country, like the one in the Herndon-Reston area.

The first time that the Herndon-Reston Indivisible group met, there were about 80 people in attendance and they fit fairly comfortably into one section of Café Montmartre at Lake Anne. The next time they gathered, they filled the eatery. At the third official meeting of the political action group, the attendees packed the community room, the classrooms and the hallway of the Sunset Hills Montessori School in the South Lakes Village area in Reston, the facility offered to the cause by school owner Eileen Minarik. “I have the meeting space. It’s a community room and this is a community group, looking for ways to look out for all Americans, and that’s the way I was raised.”

The organizers admitted that the turnout on Tuesday evening, Feb. 21, was a bit overwhelming, but “wonderful to see,” said Heidi Zollo as she made some welcoming remarks. About an hour in — after several speakers and words of appreciation to the crowd for their support — hundreds of people eventually formed working “interest groups.”

Sixteen issues were on the agenda, divided into two sessions to accommodate the size of the crowd, and to allow participants the opportunity to work on more than one area of concern, should they so desire.

The “Immigration” work group drew Robert and Jill Garcia of Herndon to attend. “It’s about caring for ‘the other,’ the ‘people who are not us’ and needing to get involved to do something about the mayhem of Trump,” said Robert Garcia. He was shepherding a line of people to their working group area with a “Hate Has No Home Here” placard held above his head.

“Indivisible 101” and “Virginia Elections” groups were available in both sessions, since educating themselves and others on how to take action and what to do to take it locally, is a cornerstone of the organization.

Tyler Tucker, who was there to represent Lt. Governor Ralph Northam, a candidate for governor in the upcoming November state election, was on hand to offer an insider’s perspective on effective engagement with elected officials. He got the crowd fired up when he declared “They’ve got to be scared. I have never seen such participation on our side.”

Some of the attendees, like Nikki Pugh from Germany and Lyndsay Nelson from Reston seemed to want involvement in all of the issue groups. “None of this, what’s going on [in this administration] is OK with me,” said Nelson. “I was raised in Germany. I studied history. I know where this can lead.”

Despite the size of each spontaneous committee, each group was able to organize themselves to appoint leadership, agree on some action points, and make plans for their gathering outside of the next general meeting.

Since Tuesday, Facebook posts for the different sub-groups of Herndon-Reston Indivisible have been sent across the internet. There are daily reminders to take some specific action with information on how to contact elected officials and what to say to best make a point. There are updates on legislation, moves from the White House, and Town Hall meetings. “We’re in it for the long haul,” said Zollo. “Like they say, it’s a marathon, not a sprint.”

To find out more about Herndon-Reston Indivisible, visit their Facebook page. The Indivisible Guide can be downloaded at www.indivisibleguide.com.