A Hometown for Everyone 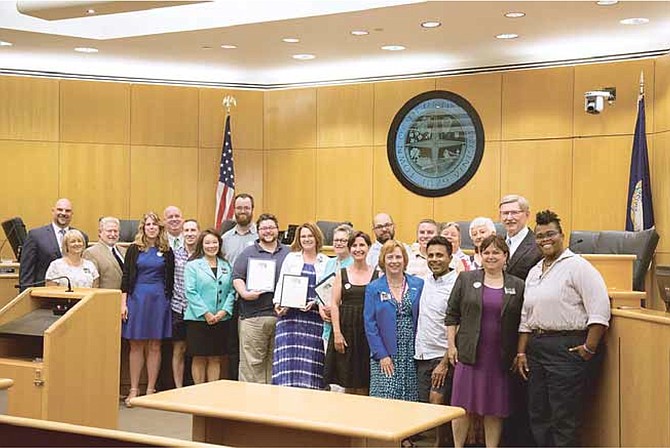 The Herndon Town Council approved a resolution proclaiming the month of June to be lesbian, gay, bisexual, transgender and queer (LGBTQ) pride month during its public meeting on Tuesday, June 13.

Virginia Del. Jennifer Boysko, D-86, and John Foust, who represents the Dranesville District on the Fairfax County Board of Supervisors, joined the council to mark the occasion. Representatives from the Dulles Triangles, a social club for the LGBT community in northern Virginia, and the Northern VA Pride (NOVA Pride), a grassroots organization that plans events for the LGBTQ community, including an annual pride parade and festival, were also there to accept the proclamation on the LGBTQ community’s behalf.

“Herndon is a place for everyone, and we mean everyone,” Councilmember Jeff Davidson said during the meeting.

“Lesbian, gay, bisexual and transgender individuals come from all regions, ethnicities, religions, backgrounds and socioeconomic statuses and contribute greatly to our community across all professions and family structures,” Davidson said as he introduced the proclamation. “The nature of that intersectionality further enriches us all with enhanced awareness of and appreciation for the diversity that makes our community more vibrant, more welcoming and more American.”

The proclamation, which was met with applause from the council chambers, was a way for the council to acknowledge the difficulties and prejudice the LGBTQ community has worked to overcome, encourage advocates and recognize the impact that LGBTQ people have on Herndon.

“For more than two centuries, our nation has struggled to transform the ideals of liberty and equality from founding promise into lasting reality,” the resolution reads. “LGBTQ+ Americans have worked tirelessly on the next chapter of that history — from the patrons of the Stonewall Inn who sparked a movement; to service members who can be honest about who they love; to marriage equality; to brave young people who come out and speak out every day. Each day, support for LGBTQ+ equality is growing, led by a generation who understands that—in the words of Dr. Martin Luther King, Jr., ‘… injustice anywhere is a threat to justice everywhere.’”

THE PROCLAMATION was also a stance of solidarity with the LGBTQ community.

“We are reminded that we are not truly equal until every person has the same rights and opportunities,” Davidson said.

Councilmember Bill McKenna was 13 years old when he first learned from his parents about the Stonewall Inn, a gay bar in New York City in the Greenwich Village neighborhood, which was the site of the Stonewall riots of 1969 that many consider to be the spark that ignited the gay liberation movement in the United States.

Vice Mayor Jennifer Baker recalled a time during the meeting during high school when she proudly disagreed with her Methodist pastor.

“I asked him, ‘Why would anyone choose to be persecuted and discriminated against?’” she told the audience.

A lengthy conversation about whether sexual orientation and gender identity were choices people could make ensued between Baker and her pastor.

“I walked away more convinced than ever that sexual orientation and identity are gifts that we are born with,” Baker said.

She then reminded the audience that the right for LGBTQ Americans to marry and openly serve in the military in all 50 states are fairly new freedoms and that there is more progress to be made.

In lieu of federal protections, many states and municipalities have enacted legislation that makes it illegal for the government and businesses to discriminate against the LGBTQ community on the basis of sexual orientation, gender identity and gender expression for accommodations such as housing, employment and adoption.

While Herndon celebrates diversity in its community, the town council is not able to enact protections for its LGBTQ citizens without permission from the state legislature in Richmond, which is currently opposed to doing so.

This year, a delegate of the Virginia General Assembly wrote a law that would have regulated transgender people’s use of restrooms in schools, highway rest stops and in government buildings, much like the infamous North Carolina law. It was drafted by Virginia Del. Bob Marshall, R-13, Manassas, who previously authored the state’s ban on same-sex marriage, which is now unconstitutional.

Gov. Terry McAuliffe promised to veto any discriminatory legislation against the LGBTQ community if it ever made it to his desk, which was not needed since the bathroom bill was permanently tabled by a Virginia House of Delegates subcommittee.

“Too often, we’ve seen people with strong religious convictions feel entitled to impose their morality and their religion on others, which often includes denying rights to LGBT individuals,” Baker said.

The Virginia House of Delegates advanced another bill even farther when it passed a religious freedom bill in January that would have given taxpayer-funded agencies and service providers a license to discriminate against LGBTQ people for religious reasons. The bill eventually made its way to McAuliffe, who vetoed it in March.

HERNDON has a reverse position on its LGBTQ residents.

“Herndon is a hometown for everyone,” Mayor Lisa Merkel said during the meeting.

Merkel has a rule that she does not commit to signing any pledges because of the overwhelming requests she receives to endorse or oppose various causes and issues. However, she made one exception, she told the crowd.

“I have signed one since I have been the mayor of this town,” she said. “And that was the Mayors for Marriage Equality because I thought that this is the only pledge anyone has come to me and asked me about that I thought, ‘There is not a single argument anyone could give me that would make me change my mind on this issue.’”

Accepting the proclamation on behalf of the LGBTQ community in Herndon were local leaders from northern Virginia LGBT organizations.

“Thank you,” said Susan Murray of the Dulles Triangles. “That’s what I have to say.”

“I think I’ve said this every year, how heartwarming it is to live in a town that is as accepting as Herndon, which is such a departure from where I’m from in deep south Louisiana,” said Kyle Rohen, a board member of NOVA Pride and a resident of Herndon.

Councilmember Grace Wolf Cunningham looks forward to the day when proclamations like the one passed that night are superfluous.

“I think it’s wonderful that we’re able to recognize all members of our community with proclamations,” Cunningham said during the meeting. “On the other hand, I look forward to the day when we don’t need to do that. We’re just regular. We don’t talk about Asian Americans or black Americans or disabled Americans or LGBT Americans; they’re just Americans. So, that’s my hope.”

In the meantime, Cunningham said the council would continue to recognize all contributing members of Herndon’s community.

LGBTQ northern Virginians and their allies also have another event to look forward to this fall.