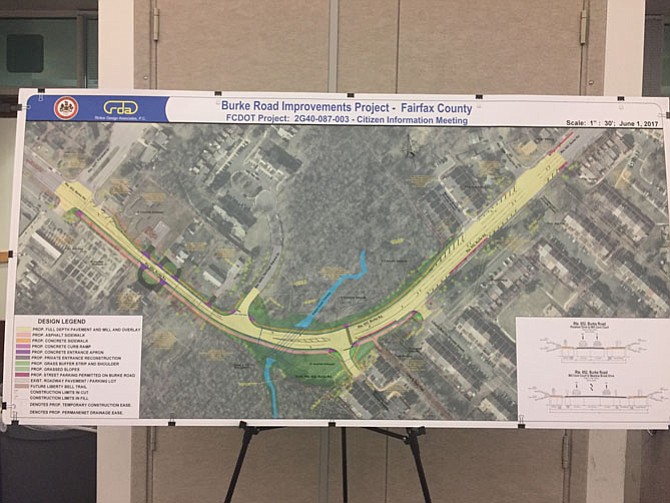 The highlighted route acts as the current future design for the new road. Photo by Gretchen Kernbach

Residents gather at the West Springfield Government Center to listen to the project team.

On June 1, the Burke community was informed about the new Burke Road realignment plans set to start construction in the late fall of 2019. The presentation was the first formal educational meeting regarding the design plan, which proved to upset Burke Road residents.

Project manager Jeanmarie Roberson narrated the exhibition, giving attendees an overview of the extent of the construction and what was designed to come out of it. From Parakeet Drive to Peregrine Drive on Burke Road, the Fairfax County Dept. of Transport plans on straightening out a sharp, horizontal curve that has crash and flood history.

In addition to creating a wider turn for drivers, FCDOT also plans on raising the roadway and constructing new pedestrian and bicycle connections. Existing drainage pipes will be replaced as well.

The 2,200-foot long project plans to have its final design finished by spring 2018, but Roberson claimed they have more than 50 percent of it done already.

“That level of effort had to be done to understand property and utility impacts. It is almost required we get to that point for good dialogue with the community,” said Roberson.

THE CURRENT PROPOSED DESIGN is not only set to remove the hazardous curve but also increase line of sight throughout the entire road. New box culverts will address the flooding issues.

However, what most residents wanted to know was what FCDOT was going to do about the speeding issues that take place on Burke Road every day.

“If they’re going to be straightening out this road the way they plan to, they need to actually consider putting in lights or stop signs, something that makes people slow down,” said Katherine Fickley, who lives off Burke Road. “They really need to consider the safety of the citizens living here, not just what they want to do to conform with VDOT’s plans.”

Fickley lives on Heritage Square Drive, a townhouse community with a circular driveway connecting the neighborhood. She added that drivers use the roundabout in her neighborhood as a means for turning around if they need to get back on Burke Road heading the other way. Yet, they hit the neighborhood road at unsafe speeds, causing a potential hazard to young children playing outside. A straightened-out curve will only encourage them to do so more.

“Safety is our number one concern right now. If 35 was the speed limit people were going, we wouldn’t have an issue, but they’re going even faster. The way this project is constructed, it is only going to increase speed in all the residents’ minds,” said Aisha Rodriguez, HOA president of Cardinal Estates community, which is located on both sides of Burke Road.

Even though Roberson stated that the new curve is designed to accommodate the 35-mph posted speed limit, residents believe drivers will be hitting it even faster. The road lane’s narrow design is an attempt to psychologically make drivers go slower. However, that is the project team’s only effort to control speeding on Burke Road.

Joan Belcher, who has been living by the curve for 55 years, claimed it’s not as dangerous as people say it is. Neighbor Darrell Marshall backed Belcher up, saying that it is just the overgrown bamboo which makes the curve dangerous. The lack of sight around the corner needs to be addressed rather than the entire road. Both Belcher and Marshall stand to lose parts of their property due to sidewalk additions on the road.

Also present was the Fairfax County Department of Transportation Director Tom Biesiadny, who stood behind Roberson as she took the heat of the comments and questions.

Anita Vermeer, who resides on the corner of Aplomado Drive on Burke Road, witnessed a car accident right in front of her house.

“My concern is that there are already more than 35 mph speeds happening in this community. A wider curve will get more people to come through this way,” said Vermeer.

Other concerns with the road realignment were with bike lanes and crosswalk placements. Both of which seemed like easier fixes than the speeding problem.

There was continuous banter from the audience regarding Burke Road’s poor line of sight, an issue that wasn’t dying as the evening progressed. However, it was made clear that speed limits are a responsibility of the state and there was nothing the county could directly do about it.

EVEN THOUGH THE Q&A aspect of the meeting had to come to an end, members of the team presented themselves at visual displays set up around the room for further one-on-one discussion.

“We have asked for everyone here to provide comments,” said Roberson. “The next big step, once we make some decisions, would be reporting back to the community. We will be back out for another dialogue with the community about the project.”

Residents will be contacted sometime in the future for updates on the design and another date for a second community forum.