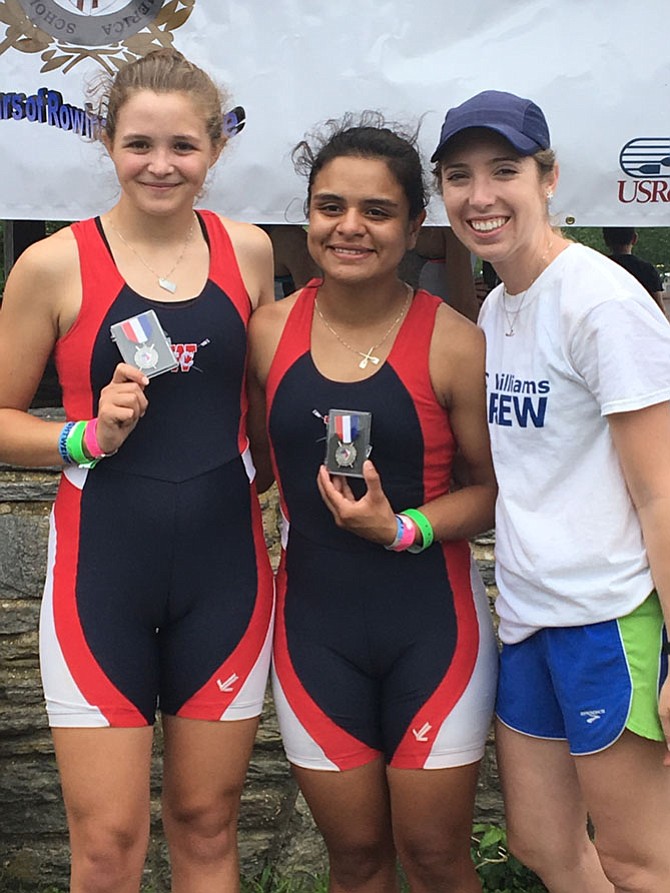 T.C. Williams seniors Cecelia Fernandez and Lauren Kelly continued their award-winning season on the water by capturing the silver medal in the Women’s Lightweight Doubles category at the Scholastic Rowing Association of America (SRAA) National Championships on May 26-27.

The Titan duo, fresh off a silver medal performance at the Stotesbury Cup Regatta in Philadelphia, once again engaged in a pitched battle against the Light Doubles from the all-female Baldwin School from Bryn Mawr, Pa. in the 1500-meter final.

“We were strong off the start and all I could think was ‘don't fly and die,’’’ said Kelly, noting the importance of running a smart, strategic race from start to finish. “I anticipated that Baldwin would separate themselves from the rest” of the boats in the race.

But in a contest with the six fastest women’s lightweight doubles from roughly the eastern half of the U.S. and Canada, Kelly and Fernandez never let Baldwin pull too far away from them. “We were even with Xavier Prep and Germantown Friends leading up to 750 meters,” the halfway point in the race, Kelly recalled.

“Then we made our move and inched ahead of both of those boats. At that point I knew that we had a chance for second, maybe even first. The moment we hit the sprint, I knew we had to leave it all on the water.”

“The sprint was my favorite part of the race,” said Fernandez. “We started the sprint off great, exactly the way we had been practicing and planning, picking up the stroke rate every few strokes.”

But after more than 1200 meters of a grueling competition, she continued, “I had trouble towards the end taking the stroke rate up any higher. That's when Lauren said ‘just go for it!’ Something clicked and we were able to pick up the stroke rate even higher than we originally wanted to,” said Fernandez.

As the crowd cheered the two-boat dash for the finish, the Titan duo closed the gap with Baldwin but could not pass them before the finish line intervened. The TC seniors finished the race with a time of 5:49.956, three seconds behind Baldwin and clearing the bronze medal duo from Xavier Prep by over five seconds.

“The moment we crossed the finish line, I knew that we gave it our all and can honestly say that was the best race we've ever had,” added Kelly. Fernandez concluded that “Lauren and I are really looking forward to our race at St. Catharines [at the Canadian Nationals], our last race with TC Crew.”

Unlike Stotesbury, which includes a range of competitors, only the cream of the crop are invited to Nationals, which returned this year to the Cooper River in Camden, N.J. Kelly and Fernandez’s ticket to the dance followed their gold medal win at the Virginia state championships. Six other TC boats also qualified for this select competition, including state champions from the Men’s First 4 and the Women’s Junior 8 and Frosh 8, the Men’s Lightweight 8 (which won the gold in Virginia racing as a Junior 8), and TC’s elite Women’s First and Second 8s.

As the competition began on Friday, May 26 with heat races, all seven TC boats advanced to succeeding rounds. After exciting races in semi-final rounds, three TC boats – the Men’s Lightweight 8, and the Women’s Second 8 and Frosh 8 – joined Kelly and Fernandez for a hard-earned spot in the six-boat national championship finals in their respective categories.