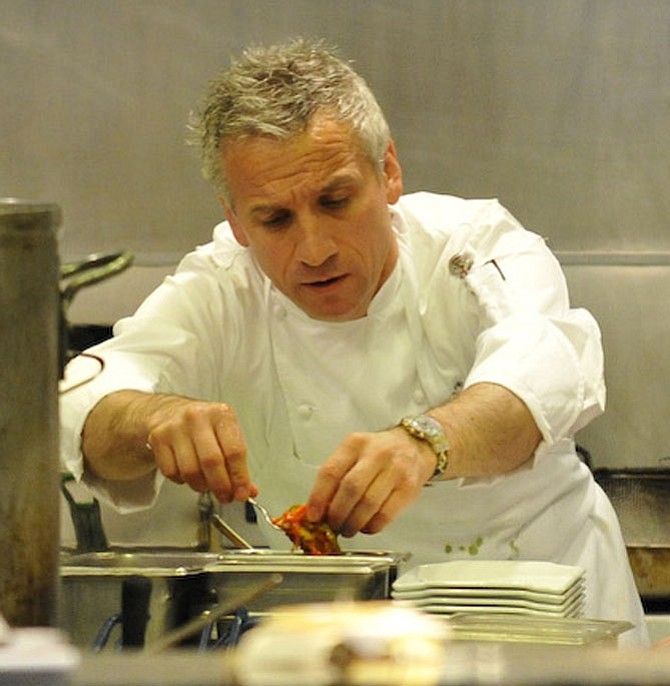 Domenico Cornacchia, the chef driving the menus at the restaurant and pizzeria, described his cooking style as a mixture of traditional bases with “a lot of creativity, but also a lot of respect for ingredients as well.” Photo courtesy of Domenico Cornacchia

After culinary school in Italy, Chef Domenico Cornacchia worked throughout Europe — Switzerland, France, Belgium and Luxemburg — before immigrating to the United States in 2005, where he quickly made a name for himself as corporate executive chef and partner of Café Milano in the Georgetown neighborhood of Washington, D.C. He was also involved with Café Milano’s two sister restaurants Sette Bello in the Clarendon neighborhood of Arlington and Sette Osteria in the Dupont Circle neighborhood of D.C. before he opened Assaggi Osteria in November 2009.

Chef Domenico Cornacchia and his Assaggi Osteria Italian restaurant in McLean will once again dish out small plates after seven months out of the kitchen. When it reopens on Tuesday, Aug. 1, he will be serving a side of something different: Pizza.

Cornacchia opened the fine dining restaurant in the McLean Square shopping center on Old Dominion Drive in November 2009. It has been temporarily closed for renovations since January.

Cornacchia, who was born and grew up in the Marche region of eastern Italy, built his eatery on the concept of serving a variety of Italian-inspired cuisine that could be ordered in smaller portions. In Italian, “assaggi” means tastings, he said.

But with the support of investors from McLean Investors, LLC, he added another concept: A full-fledged pizzeria that will offer a more casual experience for his diners called the Assaggi Neapolitan Pizzeria.

“We kept the fine dining and we carved in a Neapolitan pizzeria,” Cornacchia said. “Same location, same roof, same address, same everything, but it’s going to have its own entrance, its own menu, its own wine list. It’s two concepts under one roof, if you will.”

The renovation was done by Piazza Construction, Charles Piazza’s construction and remodeling service company based out of Montgomery Village, Md.

WITH THE RENOVATION, the restaurant retained its original square footage indoors, but the entirety was gutted and its décor, flooring and paint were changed. The traditional atmosphere and amber-painted walls of the dining room were replaced with a more modern feel with purple accent walls painted in eggplant. The restaurant’s bar was also expanded, along with the replacement of its bathrooms and kitchen equipment.

“Everything from A to Z, basically,” Cornacchia said. “It’s a brand-new place, but the concept to the core stays the same.”

To make room for the full-service pizzeria, the space was divided.

“I would say 80 percent stays to the restaurant and 20 percent is dedicated to the pizzeria with one kitchen serving both,” Cornacchia said.

An expanded patio with a permanent canopy in the front of the restaurant will seat guests of the fine dining restaurant, while a new patio off to the side will be reserved for the pizzeria.

A distinction worth noting is the restaurant’s brand-new stone oven that will be used to bake the pizzas in the pizzeria.

“It was built in the United States, but all the material—including the sand and stones and everything—comes from southern Italy near Naples,” Cornacchia said.

The pizzeria will not neglect libations or special plates. Like the restaurant, which carries up to 600 wine labels from around Europe, focusing on Italy’s 20 regions, the pizzeria will also keep the aged grapes pouring and then some.

“It has its own wine list and expanded beer list,” Cornacchia said. “It’s also going to have a nice selection of small plates, which will change on a daily basis according to what we find on the market and season ingredients, of course.”

Though the pizzeria will be low-key when compared to its other half, the chef promises he took the same amount of care to ensure the menu lives up to his reputation.

AFTER CULINARY SCHOOL in Italy, Cornacchia worked throughout Europe — Switzerland, France, Belgium and Luxemburg — before immigrating to the United States in 2005, where he quickly made a name for himself as corporate executive chef and partner of Café Milano in the Georgetown neighborhood of Washington, D.C. He was also involved with Café Milano’s two sister restaurants, Sette Bello in the Clarendon neighborhood of Arlington and Sette Osteria in the Dupont Circle neighborhood of D.C.

In order to refer to their pizza as Neapolitan, the pizzeria’s ingredients have to be Italian.

The tomatoes will come from Naples and the cheese will not rely on shredded mozzarella made from cow’s milk like most pizza chains. Instead, the pizzeria will avoid using cheeses that are uncharacteristic of a fine Italian eatery and will use buffalo mozzarella, or mozzarella di bufala, as its staple. This is a cheese made from the milk of an Italian breed of water buffalo: The Mediterranea Italiana buffalo.

The pizzeria will use slow-rising dough that takes 24 to 48 hours to rise, which he says is the secret to the crust, which will be “airy, very, very light and thin.”

Though Italian ingredients are important, the chef doesn’t let it get in the way of his imagination, describing his cooking style as a mixture of traditional bases with “a lot of creativity, but also a lot of respect for ingredients as well.”

This means the chef changes his menu every season to adjust to readily-available and fresh ingredients.

“The menu is fresh and lighter during the spring and summer and a little more earthy during winter and so on,” he said.

Seasonal adjustments are also where the chef has fun.

Cornacchia and his investors hope his more informal fare will attract a new generation of fast-casual eaters.

“The restaurant industry is pretty much like the fashion industry,” he said. “The places kind of get tired from the fact that there is so much competition coming.”

THE DEVELOPMENT of Tysons Corner and the District nearby makes for fierce competition.

“The restaurant industry is going crazy, in a positive way,” he said. “You have to be up to date in order to compete, otherwise, you’ll be left behind. The clientele also keeps changing.”

The changes will also be fun for its loyal patrons.

So far, he and investors are encouraged that the risk of closing and changing up the establishment will be worth the reward.

“People are stopping in every day to find out when is the reopening,” Kenneth Gazzola, one of the restaurant’s investors, said. “It is a very exciting time.”

“We’ve had dozens of people stop by,” Gazzola added. “That’s the best encouragement we could have.”