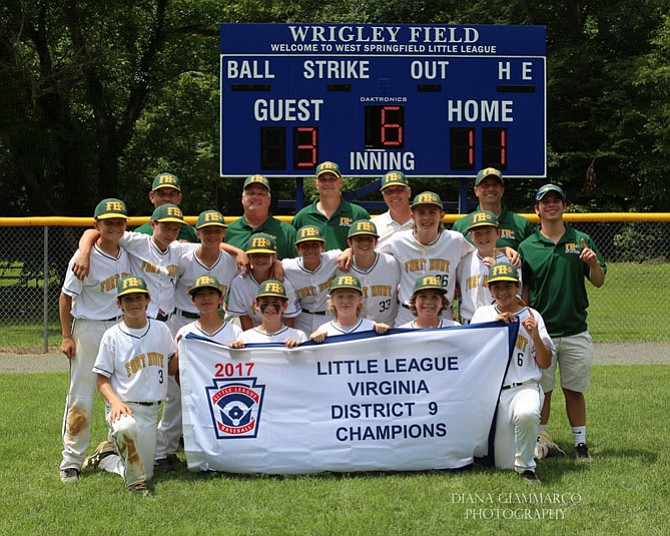 The Fort Hunt Little League (FHLL) Majors All-Star team won the 2017 District 9 Championship on Saturday, July 15, 11-3 over West Springfield National and will next play Friday in the Virginia State Championship Tournament in Triangle, Va. The team went 6-0, hit 28 home runs and held their opponets to just 8 runs over the six games. This is the first time since 2006 a FHLL Majors team won the district and advanced to the state championship tournament. The team consists of 12-year-olds from area. The VA District 9 Little League consists of 10 local little leagues.

"This team was successful due to their character, hard work and contributions from everyone. We are excited to represent our league and community at the state tournament," said coach Tony Castrilli.

Also for the first time ever FHLL had four out of six All-Star teams win their District 9 tournament and play in the state tournaments. The 8/9/10, Majors, Intermediate and Seniors All-Star teams all advanced. The FHLL Seniors won the Virginia State Tournament and will next play in the regionals near Tampa, Fla. starting on Saturday, July 22. The 8/9/10 team advanced to Championship round of eight losing in 10 innings to the eventual state championship team.

FHLL President Barry Muse said, “This is a tribute to the hard work and dedication of thousands of volunteers over many years who have made Fort Hunt Little League what it is today. We’re very proud of all our coaches and salute our exceptional kids for their hard work, determination and for being great teammates everyday – the very essence of life and sport. Thanks to everyone in Fort Hunt for their generous and unwavering support for Fort Hunt Little League over the past 60 years – you made it possible.”

The Fort Hunt Majors All-Star team next plays in the state tournament on Friday, July 21 vs. Coeburn Little League at Fuller Heights Park, 7:30 p.m. in Triangle.