Heading to the Southeast Regional in North Carolina. 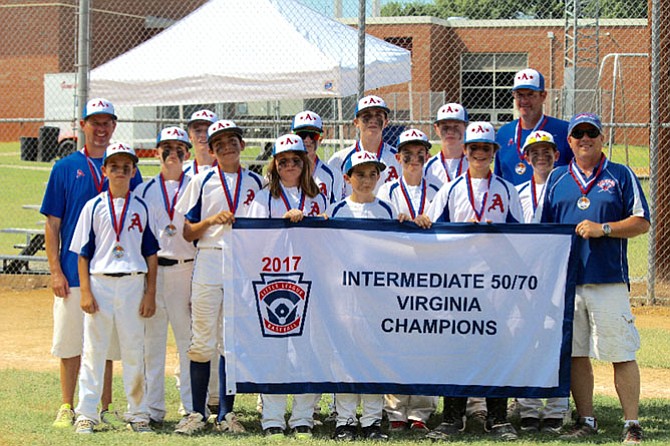 The 2017 Alexandria Little League Intermediate 50/70 All-Star Team has punched its tickets to North Carolina and the South East Regional Finals. They are the first team from Alexandria to win a Virginia State Little League Championship in any division, and did so by defeating teams from Fort Hunt, Virginia Beach, Strasburg and Halifax in the finals. After winning the district tournament in June over Arlington, the Alexandria Little League Intermediate, a team of 12-13-year-old boys, went undefeated to win the state tournament, and is representing Virginia in the Southeast Regional Tournament in Kernersville, N.C. July 21-24.

“Competing in baseball at any level is thrilling for the players. As adults and parents, we can take particular pride when players display the sportsmanship and virtues that we hope to see on the field and off. While we are pleased with their victory, we are particularly proud of those players who put forth the extra effort on and off the field to represent our league and city so well.” says Gus Chiarello, president of Alexandria Little League. “This is a great moment for our league and for our community.”

In the Southeast Region Alexandria’s Intermediate 50/70 team will represent Virginia, and will compete against the state champions from Alabama, Florida, Georgia, North Carolina, South Carolina, and West Virginia in hopes of moving on to the World Series in Livermore, Calif.