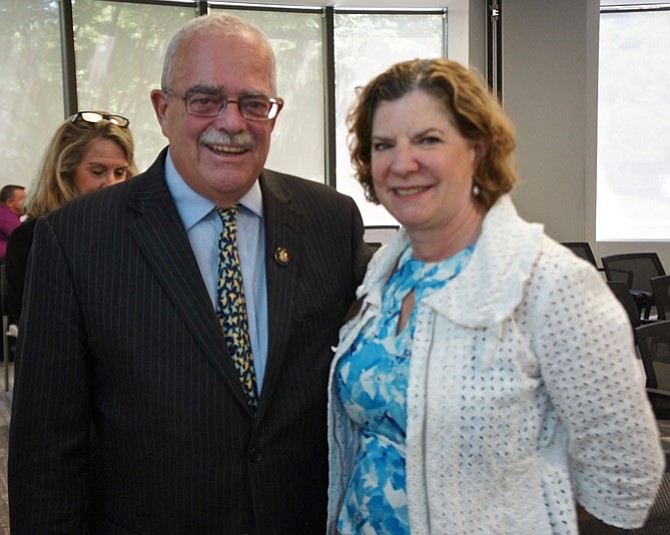 U.S. Rep. Gerry Connolly with Toni Reinhart who is spearheading efforts to make Herndon the first “Dementia Friendly Community” in the Commonwealth, with education and training in real-life encounters and situations to make living with dementia easier on patients, caregivers, families and the community. Photo by Andrea Worker. 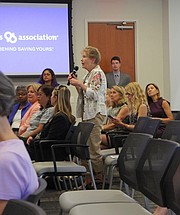 Catherine Bergstrom of Annandale relates the hospital experiences of her husband, who suffered from the disease. “It was a hospital … and they did not know how to deal with this condition or situation. We need to educate and raise awareness even to doctors and medical staff.”

“Alzheimer’s disease will touch every American family at some time or other. There aren’t many other conditions you can say that about. Today, Alzheimer’s kills more people each year than breast cancer and prostate cancer combined,” said U.S. Rep. Gerry Connolly (D-11) to the attendees of the Town Hall meeting at the headquarters of the National Capital Area Alzheimer’s Association in McLean on Monday, June 10.

Connolly was one of several speakers on the agenda, that included representatives from the National Alzheimer’s Association, the Agency on Aging from Fairfax and Prince William counties, the Virginia Alzheimer’s Commission, and the National Active and Retired Federal Employees Association.

Cindy Schelhorn, senior director of communication with the Alzheimer’s Association, opened the event and Connolly began the session with a personal story about the disease’s effect on his own family. “My Irish immigrant grandmother survived the boat journey to America, even being robbed on the ship. She worked hard. She saved. She was able to bring her own mother and her brothers over from Ireland. She wasn’t able to fight off Alzheimer’s.”

Connolly told of his grandmother’s strength from years of hard work “and walking to Mass every day.” In some ways, said the congressman, her physical fitness proved to be less than a blessing after the disease struck. “She lived a long time with Alzheimer’s. Watching her fade away before my eyes was one of the most difficult things I had to deal with growing up. The worst is knowing your loved one knows something isn’t right, but there is nothing they can do.”

THE CONGRESSMAN has co-sponsored the HOPE for Alzheimer’s Act and the Palliative Care and Hospice Education and Training Act, supported the RAISE Family Caregivers Act and is a member of the bipartisan Congressional Task Force on Alzheimer’s. But he is concerned. “The President’s FY 2018 Budget, and many of the bills currently on the table would wreak havoc, throwing people out of nursing homes and adult care centers, and severely limiting care and resources for our vulnerable seniors.” A threatened 18 percent cut in the funding for the National Institutes for Health “would gut federally funded research … it certainly would bring us no closer to a cure,” said Connolly. “And right now, there is no cure. There really isn’t much in the way of treatment.”

“There are about 140,000 Virginians estimated to be suffering from some form of dementia,” said panelist Sharon Davis with the Virginia Alzheimer’s Commission, and she says the effect of the disease takes a toll on the family as well as the afflicted. “I have spent more than half of my adult life as a caregiver.” Davis’s husband is now a live-in patient at a memory-care facility, suffering from early-onset Alzheimer’s. Her mother lived for 18 years with the disease.

“It’s a tragedy. It’s a disease that robs them of what should be the best years, time they have earned to relax and enjoy.” As Davis pointed out, it’s also a disease that can have devastating emotional and financial impacts on families, as many struggle to cope physically and financially to provide usually round-the-clock care.

Stories of heartbreak and challenges continued, but Karen Hannigan with Fairfax County Area Agency on Aging wants to get the word out that there is help and support, for the patient and the families and caregivers.

“We operate based on the ‘No Wrong Door Initiative’ model,” said Hannigan.

That model means that persons who call for help don’t encounter a “sorry, wrong department and we can’t help” response. “No matter what, we guide you. Our staff are ‘field-trained.’ We know the system. Let us do the navigating and take away at least that much stress from the situation.”

Negotiating the government regulations, the gaps between Medicare and Medicaid, the insurance maze, and trying to find appropriate resources while dealing with the actual disease and its effects on the patient, and possibly on the family as caregivers, can be overwhelming. “Call us, Monday through Friday, 8 a.m. - 4:30 p.m. at 703-324-7948,” said Hannigan. “You don’t need to know all of the information. We do. Just tell us your story.”

The National Alzheimer’s Association also offers a helpline. “It’s free care consultation. It’s nationwide. We work with agencies around the country and can help you get to the right people,” said Jane Priest, program manager with the association. “24/7, call us at 1-800-272-3900, or visit the website at www.alz.org.”

Along with more assistance for patients, caregivers and families, Priest and others on the dais and in the audience want to see more focus on education and training, as well. The National Alzheimer’s Association and the regional chapters are dedicating more time and resources on outreach programs. Annandale resident Catherine Bergstrom who attended the event welcomes this initiative.

Bergstrom related the experiences of her husband who had to be hospitalized. “This was a hospital, and they still did not know how to deal with a patient suffering from this disease.”

Sharon Davis of the Virginia Alzheimer’s Commission added her own stories of her husband’s treatment at hospitals and medical facilities that worsened his mental state, instead of improving the situation.

“And what about a patient that can’t communicate to the emergency room staff because of their condition?” asked Connolly, or even worse, the Alzheimer’s sufferer who doesn’t have a caring family member who can help “interpret” during medical transactions or who can advocate on the patient’s behalf?

THE OUTREACH PROGRAMS of the Alzheimer’s Association seek to train the general public, as well as doctors, caregivers, law enforcement personnel and others on how to recognize if someone is suffering from Alzheimer’s or dementia, and how to best react and assist.

Currently, there are no “Dementia Friendly Communities” in Virginia. The model, which seeks to raise awareness of the disease and of dementia in general and offer training and tips for real-life encounters is being tested in other jurisdictions nearby. Toni Reinhart, owner of Herndon-based Comfort Keepers that provides in-home senior and elder care services, wants to change that. This month, she is gathering local service and community leaders in her area to make Herndon a “proof of concept” project. “Herndon is so community-focused. Our leaders are very service-oriented. I think it’s the best place to get this rolling in Virginia.”

Connolly applauded all of these efforts, as he pledged to continue to fight for Alzheimer’s funding. “There are 1.1 million people in Fairfax County. Eleven percent are over 65. The fastest growing population is over 80. This is an issue that won’t just go away. We need to take action now. Contact your members of Congress — and not just the ‘friendlies!’ We have a ‘moon-shot’ for fighting cancer. Well, we need a ‘moon-shot’ to fight Alzheimer’s disease.”