Projects Under Scrutiny in McLean 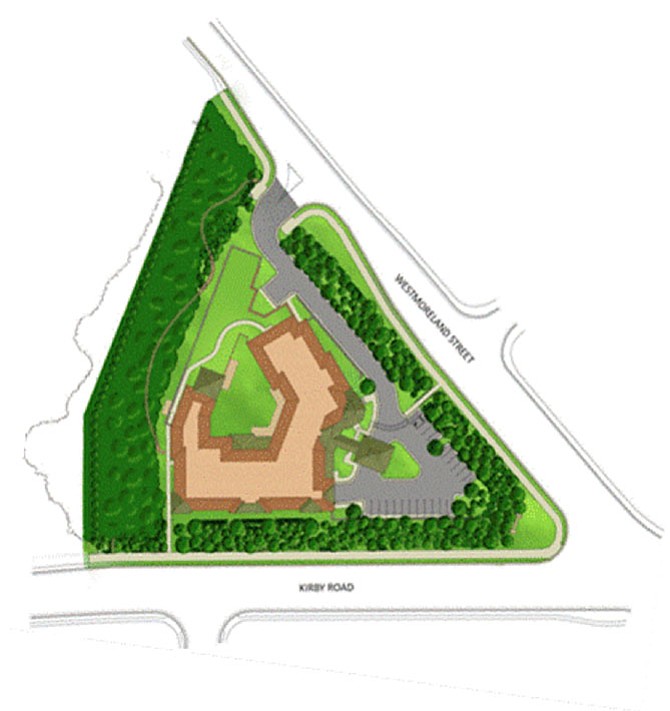 The developer redesigned the proposal to move the entrance to the facility from Kirby Road to Westmoreland Street in the hopes that it would ease traffic congestion concerns of nearby residents. Image from the McLean Citizens Association Board of Directors meeting presentation

Photo courtesy of Fairfax County Department of Planning and Zoning

The 1.267-acre property is located on the west side of Idylwood Road, west of the Dulles Toll Road. Access to the site is provided from Idylwood Road via a gravel driveway, which is located on a 30-foot wide outlet road easement.

McLean Properties is working on plans to redevelop its shopping center on Chain Bridge Road that would include proposing a new pedestrian-oriented street.

“Our goal is to create a vibrant, mixed-use, walkable place that fosters a sense of community and provides amenities for local residents.” — Vidal Sadaka, principal for McLean Properties

Supervisor John Foust (D-Dranesville) and Benjamin Wiles, his staff aide who works on land-use issues, identified some of the developments within the Dranesville District - and specifically in McLean - that they will be focusing on over the next couple of months.

All of the developments have received interest from surrounding communities, leaving Foust and the other supervisors with ample feedback to consider before the proposals reach them for a vote.

Sunrise Development, Inc. has once again applied to construct a 73-unit assisted living facility on a 3.7-acre parcel of land at 1988 Kirby Road in McLean that is zoned for residential use.

“This is the third run at this thing that the applicant has made and each one has encountered very strong vocal opposition from the local neighborhoods,” Foust says. “I don’t know what else the applicant can do at this point, but I do know that there has been no resolution of the community’s concerns.”

The developer is seeking what is known as a special exception from the county to build the facility in the residential area. The Sunrise Corporation operates many assisted living facilities in northern Virginia, including properties in Alexandria, Arlington, Fairfax, Falls Church, Fort Belvoir, McLean, Oakton, Potomac Falls, Reston and Springfield, among other locations in the state.

The neighbors around this proposed facility are concerned about the traffic it would generate in the neighborhood.

“Traffic in the area is already dangerous to the students at the nearby Longfellow Middle School and others,” Russel Jones said while testifying before the Board of Supervisors on Tuesday, June 21, 2016. “With the addition of 90 employees [of the proposed facility], a careful analysis has shown that there will be a minimum of an additional 239 trips per day through the area. No workable solutions have been proposed to deal with this surge in traffic.”

Jones is leading a “Say NO to Sunrise” opposition group of more than 1,000 families in 10 neighboring communities.

“The Sunrise proposal contributes no added value to the surrounding neighborhood,” Jones continued during his testimony. “The land at 1988 Kirby is large enough for 10 homes, with residents who could become neighbors, and homes in scale with the surroundings. This is the sort of development that we want to see.”

The facility would generate about twice as many vehicle trips when compared to a by right development of single family homes, according to Wiles.

The applicant considered the community’s concerns and has submitted revisions to its application. The most recent revision, submitted on Dec. 27, 2016, includes a 33-space underground parking garage, a reduction of height to the facility and the relocation of the facility’s entrance from Kirby Road to Westmoreland Street.

There continues to be significant opposition to this application from the community.

The county describes the area as stable residential, Wiles says. However, some residents have noted that the area includes a significant number of institutional uses, including Longfellow Middle School, Chesterbrook Elementary School, the Temple Rodef Shalom, the Chesterbrook Residences and the Chesterbrook Presbyterian Church.

According to Wiles, opposing residents believe that adding another institutional property in the area would tilt the character of the community away from a residential neighborhood.

“The concern that I think that many have is that building a large institutional building on that corner would adversely impact the character of that neighborhood,” Foust says.

The McLean Citizens Association’s Planning and Zoning Committee held a public meeting to discuss the proposal at the McLean Community Center on Tuesday, Jan. 24, after deadline for this week’s paper.

A Fairfax County Planning Commission hearing is scheduled for March 8. A hearing with the Board of Supervisors has not been scheduled for this proposal.

“I have an obligation to consider the community input as well as the zoning ordinance requirements and the comprehensive plan,” Foust says. “We have to take all of that into consideration.”

Foust will also take into consideration the recommendation from the Planning Commission as well as the staff report from the county’s Department of Planning and Zoning, which should be published in February.

“Ultimately, the Board of Supervisors has to make the decision,” Foust says.

H&M of Virginia, LLC applied to build a residential subdivision with two homes on land that is zoned for only one home.

The nearly 1.3-acre land is located at 7072 Idylwood Road in Falls Church. The site is currently developed with a vacant, single-family detached home. The site also contains a detached garage, a shed and a fence, all of which are slated to be removed. The remainder of the property is undeveloped and contains lawn and mature vegetation.

The applicant is seeking a special exception from the county to forgo the minimum lot width requirement of 100 feet. While one of the proposed homes in the application would meet the requirement, the other home’s lot would only have a width of 40 feet.

“I think lot width exceptions should be rare and they are,” Foust says. “We don’t approve many but we have a zoning ordinance that allows landowners to apply for a lot width waiver.”

The properties surrounding the site consist of single family homes, according to Wiles.

“This is a tough decision because the homeowners there are in favor of it, but MCA has to think of McLean as a whole,” says Jeff Barnett, MCA’s president.

The MCA approved a “Waiver of Minimum Lot Width at 7072 Idylwood Road” resolution during its Jan. 4 Board of Director meeting that opposed the waiver requested by the applicant.

“Since at least 2007, it has been the policy of the McLean Citizens Association

Zoning Ordinance, particularly where such requests are made to enable the creation of

A pipestem driveway, that is planned for the property, is a private driveway off of a public street that two or more home driveways branch off of.

“This area has always been a suburb of Washington, D.C., and now we’re becoming a suburb of Tysons,” says Barnett. “There’s going to be a lot of development pressures to pack houses onto our lots and that would undermine what we view as one of the iconic natures of McLean.”

“I respect MCA’s position of never supporting these, but if it’s an application that provides more benefits than by right use and the surrounding community supports it, I think it’s something that is likely to get approved,” Foust says.

Revitalization Of The McLean Shopping Center In The Works

McLean Properties is working on plans to redevelop the McLean Shopping Center on Chain Bridge Road.

“Everybody is curious and a lot of people are excited,” says Foust. “We’ve had a very difficult time getting landowners in downtown McLean to move forward with revitalization efforts. This would be a major step towards revitalization and I think it would likely cause other land owners to reinvest in their properties.”

The community has been supporting this redevelopment with a “Main Street” concept since the ‘90s, says Foust.

With this concept, what is now a large parking lot for the shopping center would become a pedestrian-oriented street with ground-level retail and restaurants and “the types of things that would draw people to that street as the go-to place in downtown McLean,” says Foust.

The McLean Citizens Association discussed the forthcoming proposal for development at its board of directors meeting on Dec. 7.

The Giant grocery store, the McLean Old Firehouse Center and a nearby bank will remain, but “everything else is probably going to go,” Jeff Barnett, MCA’s president, said during the meeting.

Though details of the redevelopment are not known.

“Over the past few years we have heard a strong desire from many people in McLean to see Main Street happen, so we are excited to start those discussions,” Vidal Sadaka, principal for McLean Properties, said in an email to the Connection. “Our goal is to create a vibrant, mixed-use, walkable place that fosters a sense of community and provides amenities for local residents.”

Sadaka hopes to have a preliminary plan ready by March that will provide more details.