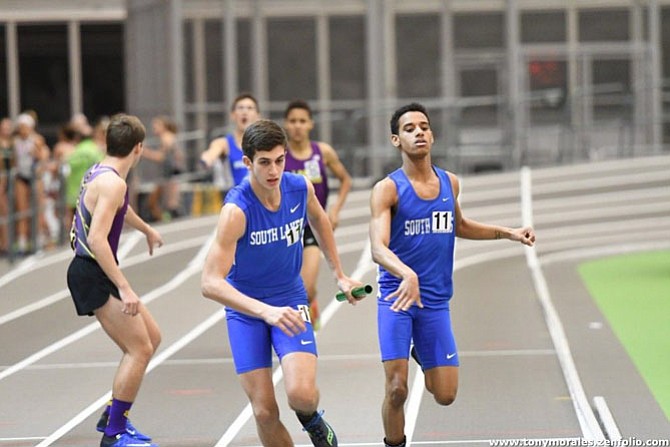 Reston — South Lakes High School had a successful showing at The Ocean Breeze Freedom Games indoor track meet Saturday, Jan. 7 in Staten Island, N.Y., which was highlighted by a record-setting performance by junior Olivia Beckner in the 1,000 meters.

Beckner finished fourth in that race with a time of 2:54.06, breaking the school record of 2:58.47 that she set last season. She then teamed with sophomore Sophie Halkett and juniors Aly Rayle and Sarah Wolfe for third place in the 4x800 meter relay (9:33.12). Both events were in 6A state meet qualifying times.

The SLHS boys team was led by the state-qualifying 4x200 meter team of seniors Timiebi Ogobri, Don’ta Whitley, junior Jack Eggeman and sophomore Nicky Napolitano. They finished fourth with a time of 1:32.87 in the finals after running a 1:33.35 in the preliminaries.

Seniors Peter Sepulveda, Jack Watkins, Dimarcus Vilcheck and junior Alex Loukili finished second in the 4x800 meter relay in a Northern Region championship qualifying time of 8:22.07. Louikili also finished fifth in the red division of 1,000 with a time of 2:35.82, which is also a regional qualifying time.

The track team will close out the regular season with members competing at both the conference meet Saturday, Jan. 14 at Thomas Jefferson Community Center in Arlington and the Virginia Showcase, Jan. 13-14 at the Liberty University in Lynchburg.