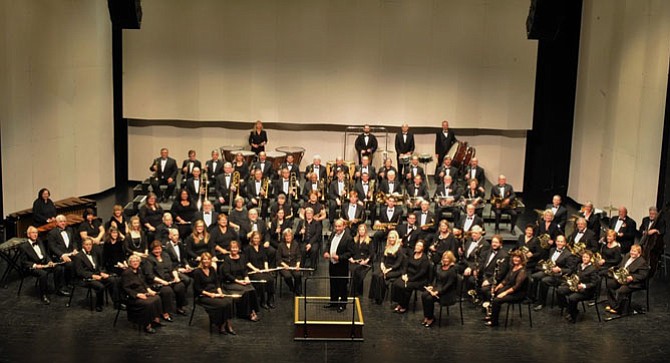 The City of Fairfax Band in concert. Photo Contributed

The City of Fairfax Band (CFB) is headed to France June 1-8 to perform in Normandy and Paris. In Normandy, the band will provide the music for one of the year’s most significant observances of D-Day (June 6, 1944): the commemoration and wreath laying at the Normandy American Cemetery and Memorial, which overlooks historic Omaha Beach.

The Virginians’ other D-Day related performances include a ceremony at the Brittany American Cemetery and Memorial in Saint-James, France. There rest American military personnel who lost their lives in either the Normandy or Brittany campaigns of World War II. The band also will travel to the town of Sainte-Mère-Église to be part of a D-Day musical salute and parade. In 1944, U.S. paratroopers dropped in and around the town hours before the beach landings. After their Normandy engagements the musicians go to Paris for one outdoor performance.

Joining the CFB will be some members of the Main Street Community Band (MSCB), which is part of the City of Fairfax Band Association.

In addition to seeing France and showcasing their musicianship before an international audience, the ensemble is drawn in a special way to honoring those who fell during and after D-Day. A significant number of CFB members are either retired career military, former military musicians, or relatives/descendants of those who served in the D-Day operation.

The band of community musicians is led by former U.S. Air Force officer Robert Pouliot, whose posts included the conducting staff of the U.S. Air Force Band in Washington.

“I salute the members of the City of Fairfax Band Association for making this trip. They will honor well those who made history and gave all to defend liberty, equality, and brotherhood. It is a high honor and great privilege for these musicians from our community to represent our city and our country overseas, to perform in an international setting, and to strengthen even more the strong ties between our people and those of another freedom-loving nation,” said Fairfax Mayor Steve Stombres.

On D-Day, military forces from the USA, Great Britain, and Canada conducted history’s largest amphibious landing to invade Nazi-occupied France at its Normandy beaches along the country’s north coast. The Americans hit two sections, codenamed “Omaha” and “Utah.” The D-Day operation opened a second fighting front against Germany, who surrendered in less than a year after simultaneously fighting the Allies in the west and the Russians in the east.

The band will set the stage for its France trip with a D-Day linked concert in Fairfax on May 13 at W.T. Woodson High School. It will remember those veterans with John Williams’ moving “Hymn to the Fallen” from the film “Saving Private Ryan,” Paul Anka’s “The Longest Day” march from the epic D-Day movie, and a medley of tunes by the famous 1940s bandleader Glenn Miller. Colonel Arnald D. Gabriel (ret.), legendary U.S. Air Force Band conductor emeritus, will guest direct.

In addition to the France trip, CFB and MSCB musicians regularly honor U.S. veterans visiting Washington. Band members provide music at Reagan National Airport for former service members arriving as part of “Honor Flights” to see the memorials of the respective wars they fought in.

Upcoming concerts include a Main Street Community Band performance on Feb. 26 at 4 p.m. at Lanier Middle School. The City of Fairfax Band performs a “Barber, Bernstein, and Broadway” concert on March 25 at 7:30 p.m. at Fairfax High School. George Mason University’s Mason Cabaret will join the band to perform a variety of Broadway numbers. Details: www.fairfaxband.org.