Reston: On a Collision Course
Votes

Reston: On a Collision Course

Save the golf course? 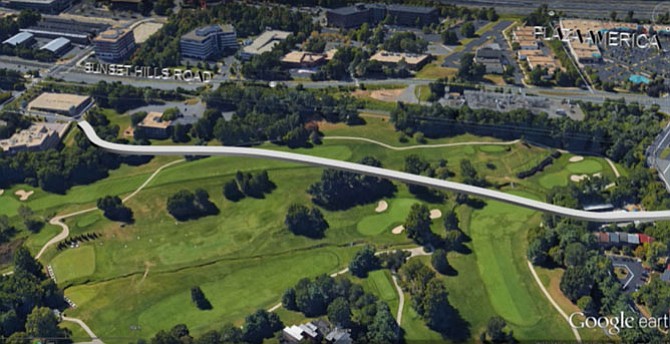 On Dec. 15, Reston Association Land Use Attorney John McBride presented this rendering of the proposed location of a road that would connect American Dream Way and Isaac Newton Square, which would adversely impact the Hidden Creek golf course.

Reston — The Reston Association adopted a resolution that opposes a new road the county has planned north of the Wiehle-Reston East metrorail station out of concern that it runs right through the Hidden Creek Country Club’s golf course.

“For those of us paying attention, [the road] stood out like a sore thumb,” says Connie Hartke, president of Rescue Reston, an organization that opposes redevelopment of the Reston National Golf Course, the other golf course located in Reston.

The plan laying out the road, the Reston Master Plan Special Study, was amended and adopted by the Fairfax County Board of Supervisors on June 2, 2015. The study began in 2009 to include changes into the Fairfax County Comprehensive Plan, which would guide the redevelopment of Reston. This included areas around the new Reston Silver line metro rail stations, the Dulles Toll Road and other residential neighborhoods and commercial areas.

The plan calls for the county to construct roadway network improvements that would provide alternative routes for traffic to drive around transit station areas and reduce congestion.

“I hope that any property owner has learned that Reston stands unified about its green, recreational space,” says Hartke.

the active recreational opportunities they provide.

The disruption to the golf course seems to be a mistake, especially given that a provision listed in the plan backs the community’s desire to preserve its golf courses.

“The Reston National and Hidden Creek Country Club golf courses are planned for private recreation use, more specifically to remain as golf courses,” the provision reads.

Also, the road is not mapped out to interfere with the course. Still, the RA does not think the road is possible without running directly into the course.

“The plan shows that connection as swinging down, not impacting the golf land-use … basically running parallel to the W&OD [Washington & Old Dominion Trail],” Reston Association Land Use Attorney John McBride said during a presentation at an RA Board of Directors meeting on Dec. 15. “Anyone that’s walked along there or seen that knows that really can’t be done. There’s no way you can make that connection without disturbing three holes of that golf course.”

The resolution concludes by saying the RA does not support any future grid of streets road connection between American Dream Way and Isaac Newton Square, because it will adversely impact the Hidden Creek golf course.

“We just want to make sure it’s out in the open that there is a discrepancy,” Larry Butler, the RA’s senior director of Parks, Recreation and Community Resources.

The RA was engaged in the process for the plan, but Butler does not recall ever attending a meeting where the road connection issue was discussed.

“The board wanted to essentially make a statement that we want to keep the golf courses in Reston because we think they’re important and that this recommendation in the comprehensive plan flies in the face of that because the road cannot be constructed without impacting the course,” says Butler.

But the implementation of all elements of the plan are not guaranteed. The grid of streets will be constructed as developments are approved by the county.

“It’s not an implementation plan, it’s a conceptual plan,” says Tom Biesiadny, director of the Fairfax County Department of Transportation. “All of the implementation pieces have to be worked out as individual development cases to move forward.”

And the golf course has not submitted any proposals for redevelopment, according to Biesiadny. Neither the golf course nor its parent company responded to inquiries from the Connection.

RESIDENTS OF RESTON who are concerned about the golf course can rest assured knowing the course is zoned for private recreation and any requests for rezoning must undergo public hearings by the county’s Planning Commission and the Board of Supervisors.

Both attorneys for Rescue Reston and the Reston Association are monitoring for any proposals to redevelop the courses.

“There’s going to be opportunities for the community to come in on any of the proposals that might be coming forward for consideration,” says Biesiadny.