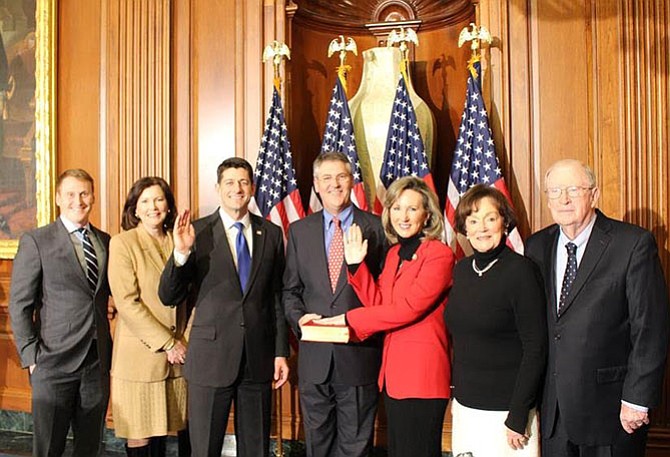 McLean — Congresswoman Barbara Comstock (R-10) issued the following statement on being sworn-in to the 115th Congress. This will mark the start of Comstock’s second term representing the people of Virginia’s 10th Congressional District:

“We live in exciting times for our region, where the innovation economy is constantly evolving and growing. I look forward to working in the new Congress with my colleagues to forge pro-growth policies that will boost the innovation economy even further. The passage of the 21st Century Cures Act in the last Congress has provided a strong foundation for innovation within the medical community as well. Our region is home to accomplished medical research facilities like Inova’s Schar Cancer Institute, and I will work with these research facilities as the 21st Century Cures Act gets implemented, in hopes that exciting new cures are developed right here in Northern Virginia.

“Over the past two years I had the honor of visiting over six hundred local businesses, technology companies, schools, rotaries, charities, and many other different groups in Virginia’s 10th Congressional District and I look forward to visiting with even more of my constituents in the new year. By talking with constituents on a daily basis, I get a better understanding of their issues and how to make Virginia’s 10th Congressional District an even better place to live.

“As always, constituent service will be one of my top priorities, the same way it was for my predecessor Congressman Frank Wolf. Serving the people of Virginia’s 10th Congressional District every day in Congress is a privilege, and I look forward to continuing to serve them in the 115th Congress.”

Virginia’s 10th Congressional District stretches from McLean down to Manassas and Prince William County and out through Loudoun, Clarke, and Frederick Counties to the West Virginia border. Comstock served on the Transportation and Infrastructure Committee; the Science, Space, and Technology Committee where she chaired the subcommittee on Research and Technology; and the Committee on House Administration in the 114th Congress. Committee assignments have not yet been announced for the 115th Congress.