Canine Companions for Independence puppies will assist people with disabilities. 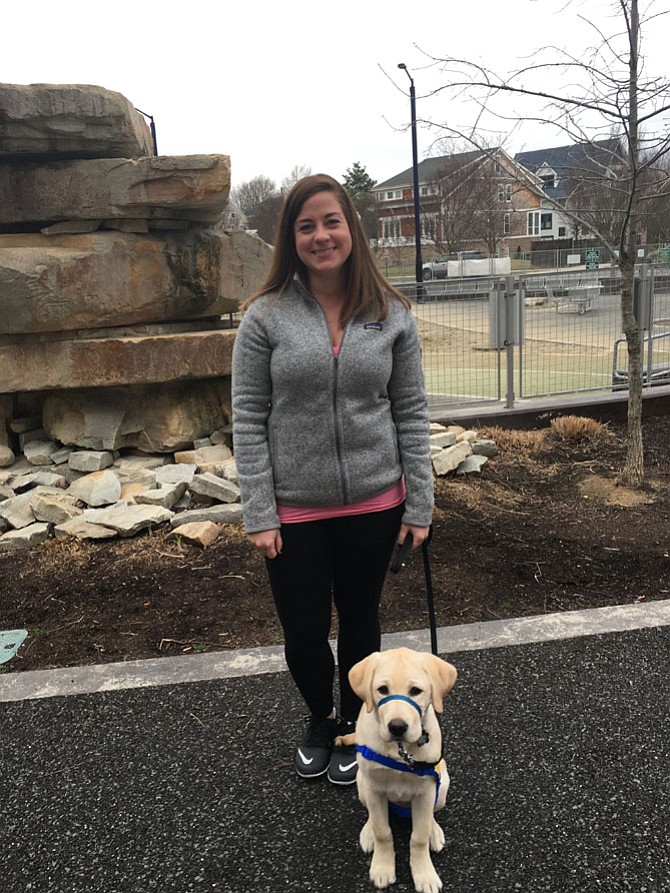 Even for those who consider themselves “dog people” through and through, like Arlington resident Jeanna Sullivan, the process of raising a puppy for Canine Companions for Independence (CCI) can be unexpectedly fulfilling and life-changing.

The California-based non-profit organization sets out to improve the lives of a variety of people with disabilities by providing them with rigorously trained service dogs. Sullivan and her husband, Dan, are currently in the thick of training a CCI Labrador-retriever puppy, Braum, whose ultimate forever home will likely be where he can improve the quality of life for a person with a disability.

“It’s been about two and a half months since we got Braum, and I didn’t realize how much I would be learning as my husband and I train him,” Sullivan said. “I’ve always considered myself a dog person, and we will always be a dog family, but there is so much that goes into raising a CCI puppy. I’ve already learned so much more about dogs than I ever thought I would — and it’s been in a good way.”

CCI started in 1975, and has provided more than 5,000 dogs to households at no-cost, where these animals make life a little bit easier for their owners with disabilities. One of the reasons that the program continues to grow is because it impacts everyone involved in such a positive way.

“Puppy raising is the ultimate volunteer experience because not only do you get the chance to play an enormous role in changing somebody’s life, but you get to enjoy raising and training a puppy – which is fun and rewarding in itself,” Lauren Ferraioli, CCI Puppy Program manager of the CCI Northeast Region, said. “Raising a puppy is not only a lesson in compassion and service to others but it also teaches the volunteer patience, persistence, behavior modification techniques, and how to find success in little bits of progress.”

The Sullivan couple has their own family dog, and has fostered multiple others, but they still find themselves surprised by the satisfaction and wonder that has come with their CCI commitment.

When a puppy-raising volunteer signs on to take responsibility of a future service dog, they will receive a tiny, soft, cuddly eight-week-old puppy. Volunteers like the Sullivans raise, provide for, and train the puppy for 18 months, when the then-grown dogs go to one of CCI’s Regional Headquarters for Professional Training. After six to nine months of this more rigorous, in-house training at CCI, the successful dogs will graduate from the program and go home with a person whose life they will change.

During the year and a half that the puppies are with their temporary, volunteer caretakers, they learn basic commands to prepare them for the more complex ones later on. CCI provides the puppy trainers with an outline and general timeline for the 18-month designated period for grasping these more elementary commands. In creating the training template timeline, CCI understood that, much like people, every dog is different with strengths and weaknesses that will never be identical to a peer.

“Every puppy is different, and I know it’s important to give him the time he needs to master a command before we move on to the next,” Sullivan said. “So far, though, Braum is right on track. He’ll be five months on March 10, and things are going great. It’s kind of crazy how quickly he picks up on anything.”

The Sullivans work together to ensure that Braum is getting everything he needs in order to one day be a successful permanent companion. Between the two of them, Sullivan said training Braum averages about 30 minutes every week day, and then a little extra on the weekends, which are the days that the couple can expose him to more of the outdoors.

“We live in Clarendon,” she said. “Braum wears his official CCI vest when he goes outside, and he’s gotten a lot of exposure to people and other dogs, so he’s learned the appropriate greetings. Every time we go outside, he’s getting some training.”

Sullivan said that the CCI community in the National Capital Area has been instrumental in her success as a trainer as well as to Braum’s achievements. The local community coordinates a bi-monthly class for all CCI trainers and dogs in the area to get together and boost the progress of the group as a whole.

“It’s around 20 dogs in the class, and we meet every two weeks in Tyson’s,” said Sullivan, who explained that these gatherings are not official CCI training courses. “We have a woman who volunteers her time to do training with us. She has a feel for what all the CCI commands are, and what each dog needs in order to master each one. These classes are a time for everyone in the community to bring up issues that a dog has, and everyone in the group can provide input on how to fix it. It’s a cool opportunity to see what other people are going through.”

When you climb aboard the CCI train, you become part of a close-knit, supportive community.

“It really is such a community, and it’s cool to be able to communicate with like-minded people, all working toward a common goal, and doing the same thing,” she said. “There are first-time CCI puppy raisers like I am, and then there are people raising their seventh and eighth dogs. It’s good to have regular interactions with all CCI dogs so you know if the dog you’re responsible for is doing the right thing. It does feel like a family.”

CCI holds official regional workshops annually for trainers so that everyone raising a CCI puppy has the opportunity to congregate with other trainers.

It was one of Sullivan’s coworkers who convinced her to consider the CCI experience, and what sold her was watching the online livestreaming of a few CCI graduations. These ceremonies celebrate the newly-crowned service dogs as they begin the process of going home to their forever homes, with a grateful, excited disabled person who has longed for a canine companion.

“It took a lot of thought, and a lot of convincing,” Sullivan said. “We watched a lot of the livestream graduations online. It’s super emotional for everyone. It’s emotional for the puppy raisers who have said good-bye to these dogs they cared for, and it’s also emotional the people receiving the dogs, because they are so grateful. That’s when we decided to do it. We know it will be tough to give Braum back to CCI after a year and a half, but it will be an amazing thing.”

Since CCI maintains such stringent standards, not all of the puppies become service dogs. While they all end up in loving homes, the CCI dogs must successfully complete scrupulous training in order to become an official canine companion. Sullivan is optimistic about Braum’s future, though.

“It’s still too early to tell, but I like to think he will pass and do well,” she said. “He’s got such a cool, wonderful demeanor to him, and he picks up on things really easily. I’d like to see my first CCI dog graduate, of course. It would be a cool feeling.”