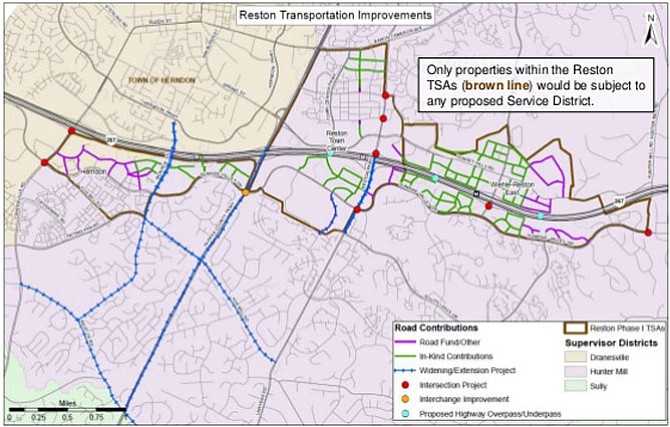 A map of the Reston Transit Station Areas (TSAs) that would be subject to the funding proposal. The Wiehle-Reston East and Reston Town Center TSAs are located along both sides of the Dulles Airport Access Road and Dulles Toll Road (DAAR) from the Virginia Department of Transportation owned storage facility to the east, Hunter Mill Road on the southeast and Fairfax County Parkway on the west. The Herndon TSA is located along the south side of the DAAR and is bounded by Fairfax County Parkway on the east, Fox Mill Road and Sunrise Valley Drive on the south and Centreville Road on the west. Land to the north of the Herndon station is within the Town of Herndon. Photo courtesy of the Fairfax County Department of Transportation 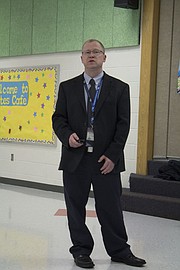 Ray Johnson of the Fairfax County Department of Transportation explains the Reston Transportation Plan during a community meeting at the Lutie Lewis Coates Elementary School.

Kelley Westenhoff was concerned that the rates for the road fund and service districts were not fixed and said she did not trust the county to adjust them responsibly or advocate for the interest of homeowners.

Hugh Rodell, Jan Visintainer and Lee Lipsey told county officials that they were not aware of the proposed plan and demanded to know why property owners within the proposed service district were not notified by mail before the plan was finalized for presentation to the Fairfax County Board of Supervisors.

Homeowners voiced concern about paying a proposed service district tax that is being proposed in Reston and outside the Town of Herndon.

The Fairfax County Department of Transportation is seeking permission from the Board of Supervisors to establish a 40-year road fund and a special service district to raise $350 million from people who own residential and commercial property near Metrorail stations.

The FCDOT hosted its second community meeting on Thursday, Feb. 23, on the proposed Reston Transportation Funding Plan at the Lutie Lewis Coates Elementary School outside the Town of Herndon.

Staff members from Supervisor Cathy Hudgins’ and Supervisor John Foust’s offices, who represent the Hunter Mill and Dranesville districts respectively, were present. The meeting, however, was not well attended by the public. Only eight community members showed up, but those who attended were vocal about their concerns.

FOR THE ROAD FUND, the rates are proposed at $2,090 per dwelling unit for residential property and $9.56 per square foot of commercial property.

The service district rate for homeowners is 2.1 cents per $100 of assessed value of the property. These are not fixed rates, but would be reviewed annually by the county.

“I’m just a little concerned about the non-developer stakeholders here, the public,” Kelley Westenhoff, of Reston, said during the meeting. “Who’s going to be speaking for them and watch the hen house?”

The FCDOT is recommending an advisory group of developers and residents to be established to review the rates and make recommendations, according to Tom Biesiadny, director of the FCDOT.

“This isn’t a static plan,” Biesiadny said during the meeting. “It’s not that the Board [of Supervisors] is going to adopt something, cast it in concrete and not revisit it for 40 years. It’s a living plan that will be reviewed annually.”

The rates have no restrictions on how they could fluctuate.

A Herndon resident who declined to provide her name also voiced concern over the impact the service would have on her home value.

“As a property owner … I’m being disadvantaged, I think, from selling my residential unit to someone just outside [the service district] that isn’t going to have this additional tax burden,” she said during the meeting. “And yet they’ll be using the streets … and yet they have no financial stake in the game. Just because I’m geographically within [the service district] why am I being assessed dollars when we have lots more users using these roads.”

Biesiadny answered her question by saying the lines were drawn in the county’s Reston Transit Station Areas Comprehensive Plan amendment, which the Board of Supervisors adopted on Feb. 11, 2014, and not by his agency.

“There was quite a bit of community outreach as part of that comprehensive plan amendment,” Biesiady said. “That effort went on for about four years in terms of looking at not just what the boundaries are, but what the development that could occur in the boundaries in the future.”

The proposed road fund would only affect commercial property owners who develop within the TSAs. By right development would not be subject to the road fund.

The proposed service district would affect all property owners within the TSAs (in brown on the map).

The money raised by the funding plan would be used to construct transportation infrastructure projects that were identified by the comprehensive plan.

These include roadway improvements, intersection improvements and new roadways to add to the TSA area’s road network to improve connectivity to, from and around the transit stations.

The funding plan will use $1.2 billion in public funding:

THE BOUNDARIES are no longer up for deliberation, according to Biesiadny.

“Why weren’t the residential property owners notified by mail in the special districts of all of these public meetings and discussion?” Hugh Rodell asked during the public meeting.

Ray Johnson of the FCDOT responded by saying that an effort was underway to get mailers out to property owners, less than five days before the Board of Supervisors was scheduled to hold a public hearing and vote on the plan.

He called on Hudgins’ staff members to provide more details, but the two staff members who were present could not provide any details about efforts to notify property owners through direct mailings.

“I’m fairly involved in my community and the area and I just found out about it maybe a week or two weeks ago, much less some of the activity that went on in the early stages of these advisory committees and boards, etcetera,” Rodell said. “I would just think that in these special tax districts … that that would have been a requirement, that all property owners are notified by mail.”

Lipsey agreed, but said that it may be too late.

“We know that the last hearings where these things go before the Board of Supervisors, it’s too late for citizens to really have an impact and really be heard early enough that what they’re saying counts,” she said.

The Reston 20/20 Committee came out against the service district back in January during the FCDOT’s first community meeting that was held in Reston.

Other groups are voicing opposition to applying a special tax on residential property owners.

The Reston Association Board of Directors voted on the same night of this meeting — Thursday, Feb. 23 — to take a position that the service district should not be applied to any residential properties within the Reston TSA. However, they also recognized that the improvements should be made to “keep pace with development” in the area and that commercial property owners should still be taxed.

The Board of Supervisors will hold a public hearing and vote on the Reston Transportation Funding Plan at the Fairfax County Government Center on Tuesday, Feb. 28, before deadline of this paper.

They will not be voting on the tax district.

During the hearing, the Board of Supervisors will also decide on whether to hold a separate hearing on April 4 to vote on the plan’s associated service district.