Uncle against Nephew in the center of 2015 Murder Case

Alexandria — Someone murdered Leon Williams. As Williams ran through the courtyard on 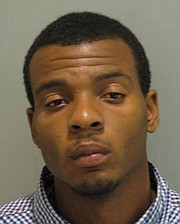 Pre Belle Way in North Old Town, someone shot him in the back. A year after Williams’ murder, in October 2016 police arrested the second of two suspects. In early February, one of the two alleged co-conspirators in the crime took a plea agreement from the Commonwealth Attorney’s Office in early February saying the other pulled the trigger. As the trial started on Feb. 21, the defense was left scrambling to prove that the prosecution’s chief witness was actually the murderer.

The prosecution, led by Peter Lord and Joseph Martin from the Commonwealth Attorney’s Office, says Williams was murdered by Brian Bolar, a 26-year-old man from Dumfries. Martin said Brian Bolar confronted Williams, fired round after round at Williams as he tried to flee, then came back to the courtyard to throw the gun into a trash can. Brian Bolar initially told the police he wasn’t present in the area, but Martin said the prosecution can prove through cell phone data that he was. Martin said others had come forward, saying Brian Bolar had confessed to them that he’d killed Williams, and a friend said Brian Bolar had called him to ask him to retrieve the gun from the murder scene.

But Brian Bolar’s attorney, Robert Jenkins, said Brian Bolar is being framed as the gunman by one of the co-conspirators and witnesses for the prosecution: his uncle, James Bolar. Jenkins told the jury it was James Bolar, not Brian Bolar, who had earlier gotten into a confrontation with a friend of Williams and shot the man with the exact same type of gun later used to kill Williams. Jenkins said the Commonwealth’s case is riddled with inconsistencies. A witness said the gunman displayed the firearm using his right hand, while Brian Bolar is left handed. James Bolar, on the other hand, is right handed. Jenkins said James Bolar was also later photographed wearing a necklace that had been taken from Williams’ body. While Jenkins said Brian Bolar’s phone was used to call a friend to pick up the gun, Jenkins said that James Bolar had borrowed Brian Bolar’s phone because his own did not have service and only worked when connected to wifi. Jenkins accused James Bolar of lying and deflecting attention away from himself by agreeing to help the prosecution convict his nephew.

The trial is expected to conclude within this week.