Pet Sitting for 30 Years and Still Loves It
Votes

Pet Sitting for 30 Years and Still Loves It 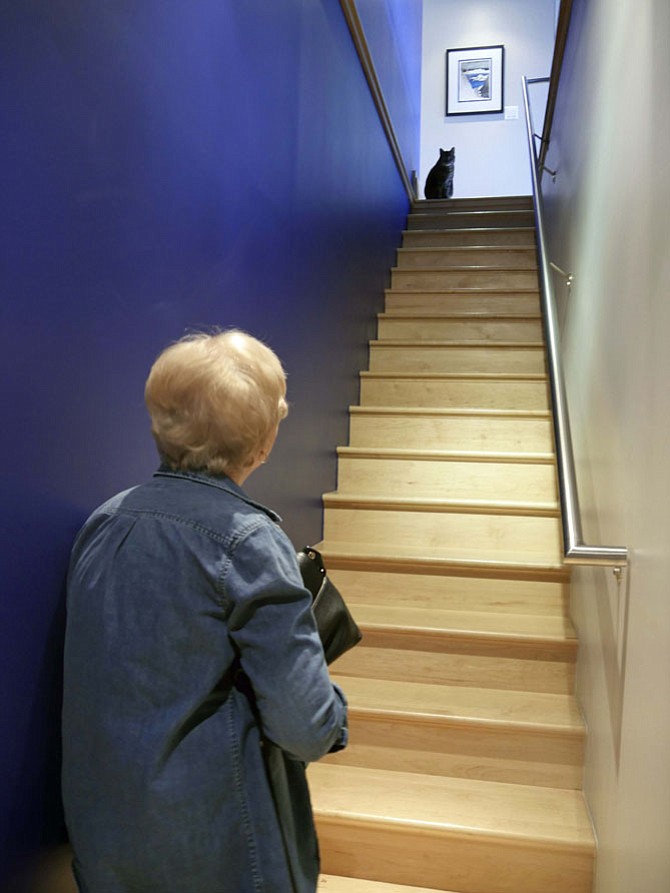 Sasha has heard familiar steps and sits at the top of the stairs waiting for his food and fun to begin with pet sitter Arlene Burstrom. Photo by Shirley Ruhe. 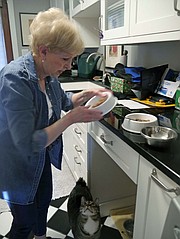 Arlene Burstrom, pet sitter at Sit-A-Pet in Arlington for 30 years, is preparing the evening meal for Sasha and Pippin, two rescue Manx brothers. 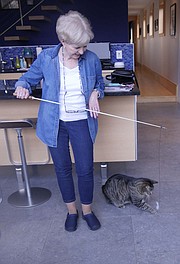 Arlene Burstrom takes out her 25-year-old Kitty Tease to start a game with Pippen and Sasha. "All cats go wild. I don't know why." 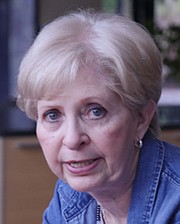 Arlene Burstrom began pet sitting 30 years ago as a way to get extra money for Christmas. I enjoyed it then, and now I say all the time I love it."

Sasha hears familiar footsteps and sits at the top of the stairs waiting for his food and fun to begin. Arlene Burstrom, pet sitter for Sit-A-Pet, says their mother travels a lot for business so Burstrom comes twice a day to feed Sasha and Pippin, two rescue Manx brothers.

Both cats are very affectionate but Burstrom says Sasha is the more independent one. "He comes down the stairs until his forehead touches mine. He wants to be greeted." She explains Pippin is shy and may hide before venturing out.

Since it is late afternoon, it is time for the can of wet food that they split every day. "And they get a small cup of dry food twice a day. But no treats." Burstrom says she feeds Sasha in the laundry room and closes the door while he eats, and Pippin gets fed outside in the kitchen. "That's because Pippin eats slower and Sasha would eat his own food and then the rest of Pippin's, too. He loves to eat."

Burstrom says she sits for mostly cats and dogs but in earlier years she had a pot-bellied pig. "I walked him; he had a harness on. Also he had a litter box. But," she adds, "he wasn't too cuddly. I also had a monkey who was on loan to the owner from the zoo. He had a huge cage and the owner told me to turn on a certain TV channel for him while I was there. I can't remember if it was Animal Planet." And she has had a few rabbits and an iguana.

Today is a holiday weekend and Burstrom is mid-way through her nine stops with eight scheduled for Sunday. She carries a clipboard with "My Pet Schedule for President's Day Weekend" and her yellow marker. "Some days this is all I do and then sometimes I have a week or two off. I like this schedule."

Sasha is finished with dinner and scratching to get out but Pippin is taking his time with his dinner. Burstrom washes out the dog dishes and goes back into the laundry room to check the litter box. She points to a small vacuum cleaner that she uses to clean up any stray litter. "This is very convenient. Some houses have three floors and the water is on one floor and the litter on another. I run back and forth. But," she adds, "It gives me my exercise."

Over her 30 years of pet sitting all kinds of things have happened. She remembers seeing an unfamiliar shopping bag sitting in the middle of a kitchen floor. Then she discovered the sliding glass doors were broken and the house had been robbed. "I called the police. It was kids stealing a lot of liquor."

Another time it was in November and getting cold. She walked out on a balcony with a plastic cup of birdseed and without a coat. Somehow the bar on the glass door dropped down, locking her outside on the balcony 25 feet up. "I was very cold. All I had was the cup so I broke it to get a tool wedge. I stuck in the handle and wiggled it and finally the handle flipped up." She says it was 18 years ago but she can't go anyplace without propping the door open. "Another time I crawled back in through a doggy door." And once a woman was In Europe and very worried about her toilet and her ceiling fan. "I don't know how but I fixed the toilet." She jokes, "We are an-all service operation."

Sasha saunters across the floor and rubs against Burstrom's legs. "They are so sweet. They kind of melt into me." Burstrom reaches for her 25-year old Pet Teaser. She said she put on a new string but this is one of the originals. "All cats go wild." Pippin flips out a paw for the bouncing string. "Try to take turns. Be good brothers." Sasha jumps for the ball at the end of the string. "We've got a game going here."

Burstrom spends at least 30 minutes at each stop. When she has many pets, it's usually longer. "I have a woman in D.C. who has nine cats. It's like feeding a family." Sit-A-Pet covers the metropolitan area with 65 employees. But Burstrom says she usually gets assigned pets within 5 miles of her house. She has a lot of regulars but a lot of new clients, as well, due to the nature of the transient area. Burstrom started her pet-sitting job in November 1987 when she was still working at a full-time job but wanted to make a little extra money for Christmas. She said she would take pet sitting jobs before and after work and even one pet at lunchtime. "I enjoyed it then and now I say all the time I love it." She leaves carefully thought-out notes for the owners describing her visit. Burstrom says it is in her nature to do over 100 percent.