A Night to Remember in Arlington
Votes

A Night to Remember in Arlington

School Board promises action as they hear some students do not feel safe. 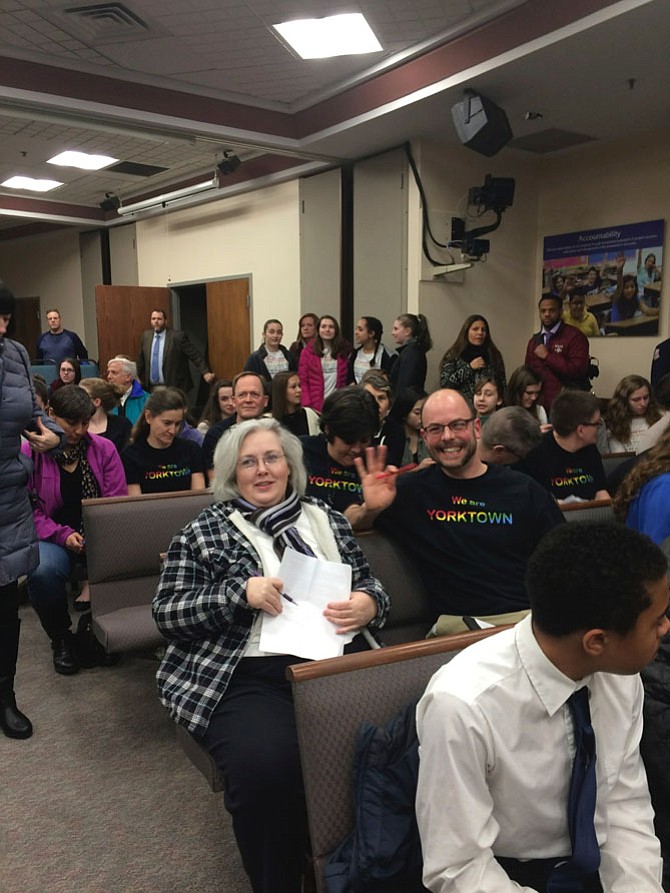 Michelle Buehlmann, a parent, and Aaron Scheultz, Yorktown High School science teacher, attend the school board meeting. Buehlmann, a former Republican staffer, said the educational professionals are doing something right: “These signs have had an impact in the school. We would not be here tonight if they hadn’t. They made the Democratic-leaning sudents feel enfranchised, and at the same time the Republican-leaning students still felt empowered enough to speak up.” Photo by Eden Brown.

“Everything is political and to think otherwise is a luxury.” — Student Ben Zazzara quoting Tom Gjelten

They walked to the podium: black, white, Latino, student, teacher, parent. They talked about two signs: one saying “Black Lives Matter,” the other saying, “Patriots know: science is real, facts are not political, women’s rights are human rights, we are all immigrants, diversity strengthens us, justice is for all, kindness is everything.” Forty-one speakers later, the room erupted in long, loud applause.

Ben Zazzara, a Yorktown High School student, wanted the school board to know that leading up to these signs being put up, comments were made at school such as: “Maybe we should have gassed all the Jews,” and “If slavery were still legal, I’d make all the African Americans here my slaves.” Zazzara told the board: “The people being attacked are the victims, not the people who are upset at the signs.”

“Since November we have seen incidents of bias and insults: sidewalk graffiti saying ‘All Muslims are terrorists,’ along with homophobic comments,” said Graham Weinschenk, a student at YHS. “But the first time we heard anything from the administration was after parents complained about the signs: minorities feel there is no support for them at YHS. If someone is being hateful, this is not a situation where the administration should stand on the sidelines. In this month of Black history, it has been worse.”

Jordan Dixon, a senior at YHS, told the crowd of about 200 at the Feb. 16 School Board meeting, “I feel like I'm in a whole new school ever since our President was elected. Our Sister Circle chapter is one that promotes Black culture and we believe Black history matters every day. But we were mocked and verbally harassed when we tried to put this banner up, and me and my African-American sisters surely did not feel respected. I did not feel safe at Yorktown.”

Kayla Harrison, who told the School Board months ago she felt Yorktown had a diversity issue, said, “When we put up our banner, students made derogatory comments and obscene gestures; the ‘N’ word was used. In one classroom, “Blacks will die” went up on the smart board. Why do kids feel empowered to say such things? Both Washington and Lee and Wakefield High have clubs devoted to Black Lives Matter. The prejudice exhibited at YHS has no place in Arlington County Schools.”

Not all students were in favor of signs at school. Colin Martinez, a YHS student, spoke in favor of taking the signs down: “I see these signs as a violation of the policy ‘services will be provided to students without political bias’, he said, and added: “It is clear to me and other students these signs were directed at Trump supporters.” He denied those who oppose the signs are also opposed to ethnic diversity. “Only one of my grandparents was born in this country,” he said.

Martinez was followed by Andrew Uz, who said, “School is a place for education; time is being wasted over this issue. We perceive these signs as political, and school policy says perception is real.”

Tracy Piper, mother of John Piper, who has been vocal about the issue on Fox News and WMAL Radio, said, “Our students should have an apolitical environment In which to learn. The sign was and continues to be perceived by many as political. It goes against the policy, ‘Services shall be provided to students and parents without political bias. I was told by a School Board member that these signs are not political and perhaps my son should seek counselling If he thinks they are.”

Jade Northover said, “The school administration gave us permission to put the banner up; but when the assistant principal told us to take it down, and I told him we felt threatened, he said, ‘If I was so uncomfortable then why was I at this school?’ To me and my other classmates, inclusivity was not shown to us; we are marginalized by some students and teachers.”

Peace Pyus read a statement by a friend who is an immigrant: “My friend’s family is afraid if her face is seen they might be in trouble,” she said. “Being a black young lady …. being African American in this country, is like being born with a chain around my ankles, …. people look at me like I don’t belong. Some kids had the audacity to call me the ‘N’ word every day, for months, until my HILT teacher intervened. ”

The science teachers at Yorktown stood up explaining why they had put the rainbow posters up in the first place. “Despite my love of physics I love teaching kids even more. I teach them how to work with people they like, and people they don't like. I should have posted this sign years ago,” said Physics teacher Deborah Waldron. “I thought being a solid role model was enough for my students. I was wrong. I didn't support my kids enough. I have had students come up to me and thank me for the role I played in putting up the signs: they said, ‘I loved YHS but I did not always feel support here.”

Physics teacher Dan Carroll said, “The signs were posted in response to specific incidents. The sign tells students, “You are welcome here.” He went on to say, “It's about who has the power and who can take power. The sign was created for people who don’t have power.” He added, “Cognitive dissonance leads to growth,” reiterating a theme heard throughout the night that having the signs up, and provoking conversation, was a good thing, a learning opportunity, and something YHS students and administrators should not attempt to quash.

Adrienne Wright, another science teacher, lamented that students at YHS seemed to feel more comfortable giving voice to racist and ethnic slurs since November. She had heard students say things like “I’ll brand you and make you my slave,” to Black students. She defended the signs: “We wanted to calm their fears. We wanted to be inclusive and kind.”

Many speakers talked about the fear immigrants have experienced in the past few months. Rebecca Alvarado said, “I know what it is to be a minority in this school. If someone feels ‘oppressed’ by signs like these, they clearly have no idea what it is to be truly oppressed. What the school has done is to remove these signs, but we need them, to remind us of who we are and to promote unity and diversity.”

“I'm here because some kids can't come here out of fear,” said Gabriella Uro. “The fears I’m hearing expressed by kids .... five or six immigration agents coming into their homes, parents who fear walking their children to school, students who have to work part-time because one of their parents has been deported: but little attention is being paid to these kids.”

Shari Benitez, an educator at YHS, said, “I'm here to talk about the underlying issues. Although we've always had some racial tension at YHS, since November the incidents of racism have been worse. We need collaboration and effective communication. We need to take a stand and uphold these values especially when it is difficult. How do we teach students empathy for others? Today's student forum was something I am proud of; in the future we will need to have trained people come help the discussion too.”

How School Board Responded

School Board vice chair Barbara Kanninen told the crowd that the board is studying the immigration issue and had spent time with an attorney earlier that evening: “We want to make sure students know their rights. We want to make sure students feel prepared and aware. We aren’t ready with information yet, but we are all deeply concerned. As for the incidents at Yorktown, we are all shocked and hurt by what we have heard.”

Superintendent Pat Murphy, regarding the incidents at Yorktown High School, said, “Thank you to all the students and parents who came out to speak. The behaviors as described are not acceptable and will not be tolerated; this is not how the ship will be run. We want all the schools to be a safe place where kids grow and learn. I believe our APS staff will continue to work to provide a safe place. If anyone has concerns, I urge you to share those concerns with teachers, trusted personnel, or me.” Other members of the board expressed delight that the students felt deeply, stood up for their convictions, and were honest and articulate. They applauded the courage displayed by the students, especially those who told their story even knowing it wasn’t a popular one. Kanninen closed the session saying it had been one of the most moving evenings she had ever experienced. Hearing YHS students speak up — sometimes for people they didn’t even know — proved to her that Yorktown is going to be OK. “Help each other, and when you see something happening, take it on.”