Arlington’s One and Only Bombay Masala Hound
Votes

Arlington’s One and Only Bombay Masala Hound 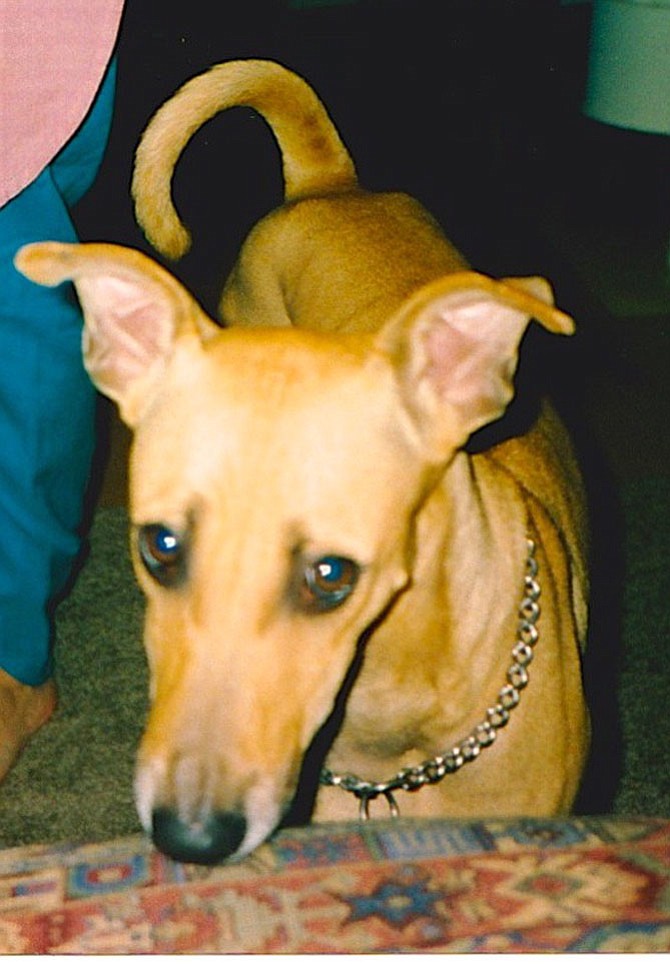 The last of her breed: the rare, versatile, ladylike Bombay Masala Hound. Photo by Eden Brown.

“Lady” was a Bombay Masala Hound. Don’t go looking for that in any dog breed book. That’s just what she was. She was a pariah or street dog; the lady was a tramp. We had found her at the entrance of the Willingdon Club, a very posh British colonial-era club in Bombay, India. How she came into our lives, and demonstrated the power of love, makes a pretty good story.

We’d gone to lunch, my husband and I, our first since arriving in the complicated, vast city of Bombay. As we walked up past the tennis courts to the colonial entrance, we were greeted by a fawn colored puppy of undetermined pedigree. She held up a paw, implying that it was hurt, and that we looked like the kind of people who could help. She was about four months old, born on the golf course, and already showing an unusual interest in the finer things in life. As the white gloved Indian door man prepared to give her a kick and send her away my husband stopped him. “Don’t kick the dog,” he told the doorman. “We will be back in an hour.”

Our two girls, 6 and 8, had clamoured for a dog for almost a year, but it was still on the “to do” list. When we found out we were once again disrupting them from their life in Arlington and going abroad, we promised: when we get there, we will get a dog. It wasn’t that simple. There were only two kinds of dogs for sale in the newspaper classified: we’d checked: huge overgrown labrador retrievers who were part Newfoundland, and tiny white fluffballs that barked incessantly. We lived in a third floor apartment on Carmichael Road.

After a lunch of lamb curry, lime soda, and strawberry trifle, we had forgotten all about the pup, but as we left, sure enough, the dog was waiting for us when we came out. She had a remarkable face, with eyes that looked as though they were lined with kohl, the local charcoal eyeliner.. My husband asked who owned the dog. “No one! She’s a street dog!” the doorman said. Could we just take her to get her paw checked? The doorman said, “You can take her, and keep her!”

Now my husband was not a soft touch, and it puzzled me why he was reaching out to this mutt, who after all, lived on the golf course where dogs are susceptible to scourges like mange, fleas, and ticks. But after I had been returned to the office, he stopped at the school to pick up the girls on the way to the vet. The pup greeted them like old friends. She told them, with her whole body: “Of course I’m going to be with you forever now.” They shrieked with delight. The deed was done: we had found our dog.

They got her checked out at the vet and the list of items that came out of her was impressive: bones, bottle caps, saran wrap, stones, and plastic bags. She was given a bath in Dettol, a rabies vaccine, and a flea collar. She was a fast learner: leash, house training, sit, come, and catching rats, all in one week. She got a name, appropriate enough for her elegant posture: “Lady.” She quickly adapted to her elevated status.

A cleaned up, collared street dog looks a lot better than a mangy dog that has never seen a bath. When we took Lady on a walk on Carmichael Road, finely-dressed Indian women plucking their way down a dirty street in gold high heeled chappals would come up to us and admire her: “ What a fine looking dog! What breed is that?”

We would answer honestly: this is a pariah dog we had rescued, and they would step back a foot and barely conceal their distaste.

“Oh? Living in your house?!” they would exclaim.

One day, we replied: “Actually, she’s a Bombay Masala Hound.” This made all the difference. “Oh, lovely!” they said in lilting English. “Where can we get one?” The girls giggled.

That Christmas Eve, while the cookies were baking, and the kitchen door was open to the balcony to cool off the room (three floors up), we were wrapping presents down the hall, when we heard the blood curdling scream of a 7 year old in pain. Running into the kitchen, I saw the cook and the girls looking over the balcony. Lady had leapt over the wall to chase a cat or a bird, and lay still, half on and half off the monsoon ledge two floors down, bleeding. Cal went down to see what he could do, grabbing the inebriated bearer and a step-ladder, and together they managed to climb up to the ledge, lift her down, and examine the damage. Her forelegs were shattered, multiple bones poking out of her skin. She was bleeding from her mouth. We lifted her gently into the back seat of the car, and my husband drove her to the Parsi Animal Hospital, an old Victorian animal care institution built by Queen Victoria to care for horses and wounded elephants. It hasn’t been renovated since. It’s 1879, in a time capsule.

The head veterinarian at the Parsi Animal Hospital was just taking off his white coat and grabbing his hat to go home. “It’s Christmas Eve, man,” he said, when asked to look at the dog. “And this is just a pariah dog! And I’m on my way to a Christmas party! ”

Cal looked at him. “I have a bottle of Johnnie Walker Black in the car, “ he said.

Pause. “Even if I operate on this dog,” Dr. Patel said, looking at the dog with more attention, “she will never survive with wounds like this in a septic place like Bombay: she will get infected and die. I’ve seen it: the wounds start to ooze, the animals just die of sepsis. Now, I’m late. “ He grabbed his jacket to leave.

“My wife works at the U.S. Consulate,” my husband threw out.

Dr. Patel sighed. He had a nephew who was going in for an interview. “I can’t promise you anything,” my husband said.

“And I can promise you even less, “ Dr. Patel said, as he tucked in his Christmas tie and washed his hands.

Lady survived the operation. She had two full length casts on her legs. She lay unconscious for two days, washed down with Dettol to keep infection at bay. The girls were dismayed at her stillness. But on the third day, she raised her head when she heard the sound of her girls. On the fourth day she wagged her tail weakly against the cement floor. The girls went every day. A week later, she raised herself up on her two stick-like legs trying to get to the girls, eventually walking on her casts even as the plaster bit into her shoulder. She left the hospital eight weeks later.

The doctor just shook his head. “I’ve never seen anything like it,” he said, “I’m sure it’s because your kids came to see her every day. Most animals die of dispair, not the wounds.” He was pleased, even though his nephew didn’t get his visa.

Lady went on to live a charmed life, and she showed her devotion to the girls a thousand times, warning the girls when an earthquake struck, rushing into their rooms to pull the covers off, and barking when strange cars would drive into the compound. She came home to Arlington, which she loved, because there was a back yard, then went to several other countries, experiencing gall bladder surgery in France, cohabiting with a goat and two peacocks in Morocco, and putting up with an Alexandrine Parakeet who had learned to boss her around with “No, Lady.” She came home to Arlington on her last transatlantic voyage, and died a few months after the younger of “her girls” went off to college. She’d raised them well. Her job was done.