Gay and Tony Barclay live in an old farmhouse built in the 1860s. 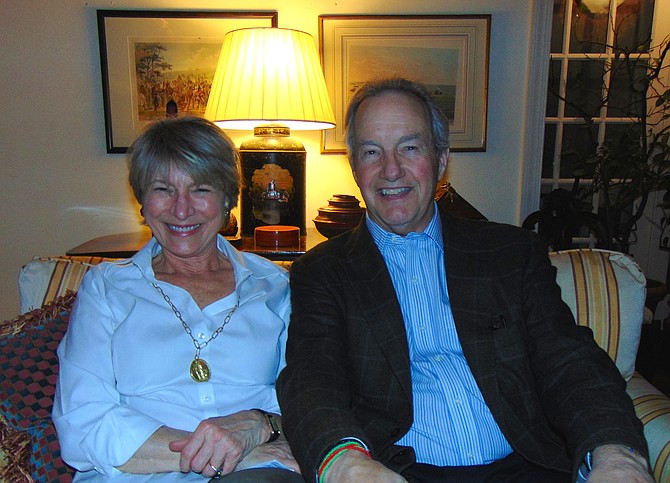 Gay and Tony Barclay of Potomac have been married for 40 years. Photo by Steve Hibbard.

Gay, 67, and Tony Barclay, 71, of Potomac have been married for 40 years; they live on River Road in an old farmhouse built in the 1860s. Through the years they've loved living in Potomac, raising hens, chickens, horses and ponies. Gay enjoys gardening, having been involved with the Country Gardeners, which does beautification around Potomac, for 30 years.

When they first moved here in 1982, Potomac had a certain quiet and sense of remoteness; an active group of horse riders rode on the bridle trails, which were well kept. But now the development has changed and it's no longer a place to have a farming life. "As a result, I've pulled up the fences and the horses have moved into Virginia. I've had to make adjustments to the changes in Potomac," she said.

An anthropologist by trade, Tony Barclay is semi-retired and works as a part-time professor at Georgetown's School of Foreign Service. He was formerly the president and CEO of DAI in Bethesda, an employee-owned consulting firm that specializes in economic development where he worked for 29 years. He used to be chair of the Citizens Advisory Board for Western Montgomery County, which works on grassroots issues and local planning proposals for Potomac, Bethesda and Chevy Chase; and served on a half-dozen boards.

Gay Barclay worked at NRDC (the Natural Resources Defense Council), the U.S. National Arboretum in the District, and as a gardening writer for the Potomac Almanac. She's on the board of the Indianapolis Museum of Art. They have two children: Eliza, 37, who works for vox.com; and a son, Hampton, 34, a Denver real estate consultant.

Asked what he loves most about his wife, Tony Barclay said her boundless energy and deep curiosity. "When she wants to learn something, she goes very deep, whether it's the arts, music or another culture," he said. "She's always ready for the next trip to the airport; we travel a lot together. We've been to 50 countries together; I could not image a better companion for all of that."

He said the secret to a happy and successful marriage is giving each other room for independence in the relationship. "I think independence as you grow and mature, and convergence as the years go by that you bring the interests together," he said.

Gay Barclay describes her husband as attentive, funny, and responsible, who takes care of things like organizing trips and getting plane tickets. "Tony is wonderful with details and takes care of details that I'm not so good at," she said.

She added: "Tony is a wonderful listener. Tony is forthright and has been talking to me about his work and his problems, and we are able to talk a lot about the things we care about. We communicate and I think talking to each other is vital .... He's so cozy; he is a great leader. He is truly inspirational to others and always thoughtful."

Tony Barclay says Gay is able to inspire others to take action, is deeply intuitive, and figures out things rapidly. "She's also a genuinely warm and loving person who gives of herself to everyone around her — family, friends and people who just show up. She's also a brilliant trainer of dogs; she's fluent in the language of dogs."

When they met, she was living in Greenwich Village and working uptown. What first attracted her to her spouse, she said was: "He was the first guy that I dated who invited me out of New York City to go climbing to Mount Monadnock in New Hampshire, and I thought that was the greatest date anyone could offer me," she said. "Versus the guys who offered me 21 minutes at the restaurant 21."

Their romance took her to Nairobi, Kenya, where Tony Barclay was doing his Ph.D. fieldwork in anthropology. "I was writing for the Saturday Evening Post and had some trips in Kenya. I stayed and Tony showed me the great charm, beauty and what a fantastic country Kenya is and we decided to get married," she said. They wed on her family's farm in Indianapolis where she grew up.

She attended boarding school, then the University of Colorado and George Washington University, and studied landscape design. Tony Barclay is from New Haven, Conn., and also attended boarding school. He studied African history at Yale, got his Ph.D. from Columbia University, and joined the Peace Corps, where he was a teacher in the highlands of western Kenya. "We got to know each other living in Kenya; we were there together about two years before we moved to Washington," he said.