There’s an alternative universe somewhere in which Dr. Larry Sabato 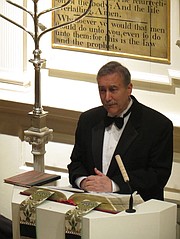 Dr. Larry Sabato at the pulpit of Christ Church

attended the packed Christ Church in Old Town to talk about how he and the other analysts were right about Hillary Clinton’s easy victory last November. It’s a universe where there is no ban on immigrants coming into the United States from Muslim-majority countries. It’s a universe where talk of building a wall along the border with Mexico is left to harder-right leaning factions in Congress and not Donald Trump’s White House. But in this universe, Sabato attended Christ Church on Feb. 10 to explain to an assembly of Alexandrians how he got it wrong.

“Virtually all of the objective, nonpartisan polls predicted Clinton would win handily,” said Sabato. “They don’t coordinate. I know them, they hate each other.”

Sabato said even within the campaigns the expectation was clear that Clinton would win. The Clinton campaigners were already deep into planning their White House transition while Sabato said the Trump camp was starting to blame one another for the defeat.

But Sabato said what the pollsters forgot was that the majority of the sampling that would have skewed towards Trump were also the type of voters who generally don’t answer polls. Sabato said the record high non-response rate to polls should have been an early warning that the predictions were inaccurate.

“We knew the blue collar towns were in revolt,” said Sabato, “but we didn’t know how high the turnout was going to be [for Trump].”

The real surprise, Sabato said, was that 81 percent of evangelical voters supported Trump, a higher margin than Mitt Romney in 2012, John McCain in 2008, or George W. Bush in either election. According to Sabato, this was largely due to Justice Antonin Scalia’s death earlier in 2016 and the lingering Supreme Court vacancy.

On the other side of the political spectrum, Sabato said African Americans and millennials didn’t turn out to support Clinton in the same way they came out to support Barack Obama.

“Analysts underestimated the extensive, intense, deep opposition to Clinton,” said Sabato. “There was 25 years of scandals and controversy around the Clintons and on election day, people maybe realized that Bill Clinton would be back in the White House with a lot less to do [in his free time].”

Moving forward, Sabato said academics will be much less likely to trust the polls in the next few elections. Mid-terms are also not looking promising for Democrats, with most of the seats up for election being deeply entrenched Republicans.

“Republicans will keep the Senate,” Sabato predicted, “and the House of Representatives looks pretty solid too. It’s possible they could lose the House, but I wouldn’t bet on it.”