Last Call: Carpool in Ballston winds down towards an April closing.
Votes

Last Call: Carpool in Ballston winds down towards an April closing. 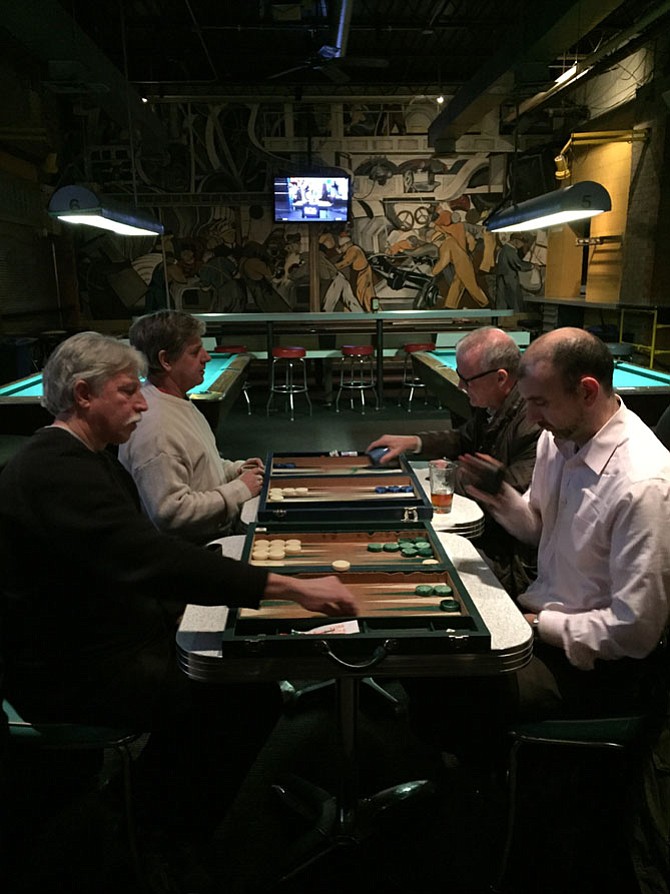 The Northern Virginia Backgammon Club plays in a back corner of Carpool. Photo by Vernon Miles.

The auto-themed interior at Carpool helped make it a distinctive local bar. 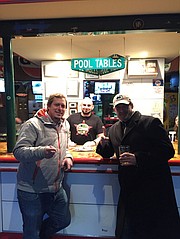 For many of the bar’s patrons, Carpool is the last bastion of the Ballston that was. The bar was built out of a converted car dealership around 1998 and never lost that heritage. The structure of the building looks nearly untouched from the outside. Inside, the bar is covered in old car keys and 1950’s car advertisements, with road and gas stations signs hung around the ceiling. In the garages where mechanics worked on automobiles, local lawyers and government contractors gathered drink and play pool. In April, all of that will come to a close as Carpool is shut down to make way for redevelopment.

Years ago, there was a time when Jorge Carcamo, a manager at Carpool for over 21 years, said you could watch the D.C. fireworks from the roof of the building. Old pictures show a blue horizon around the building, occasionally dotted by an apartment complex or office tower. But while Carpool remained mostly consistent, the Ballston around it transformed. For decades, Carpool was a holdout while towering office and apartment buildings rose around it. But in 2016 the bar was sold to developer Penzance and is scheduled to be replaced by a 22-story apartment building. The glass and metal tower will host 8,000 square feet of retail space, an underground parking garage and 330 apartment buildings. Another Carpool location was opened in Herndon and a new Carpool restaurant will open in Fair Lakes, but for those at the original, it’s just not the same. The final moments for the popular Ballston sports bar are a little over a month away. At the long bar near the entrance, bartenders and regulars brace themselves for last call sometime in early April.

“Like every business, things changed,” said Carcamo. “We started with three TVs, now it looks like an electronics store. When we opened, most of our regulars were in their mid-20s. Now, they’re in their mid-30s.”

Around him, some of the regulars grunted a solemn acknowledgement of this fact. Many of the regulars, people who come in three or four days of the week, have been coming to Carpool for around 10 years. Jason Saunders, a 10-year regular, said sports brought him to Carpool initially, but it was the people he met during those games or in the nights out on the patio in the warm summers that kept him coming back.

“This is one of the only bars with a group of regulars,” said Saunders. “There’s about 30 or 40 people who come in here [a couple] of days each week. If you come in here you’re going to run into people you know.”

“It’s not a flash mob,” said William Todd Routzahn, another regular sitting near the bar with Saunders. “You come when you come and you’re going to recognize someone you know.”

Saunders said when he looks back on the bar, it’s going to be running into other regulars whenever he stops in for a drink that he’s going to miss.

“Arlington is transient,” said Saunders. “There’s not many places with a core like this.”

“This is a place that transcends time,” said William Todd Routzahn. “Carpool is easy. The same bartenders have been here forever.... Your regulars are a diverse crowd; lawyers, bankers, government, military from all branches. It’s a microcosm of Arlington.”

Dragan Kostadinovic has been tending bar at Carpool for four years, ever since he moved to the United States from Europe. Kostadinovic said Carpool has become a second home for him and the staff is his second family.

“The people here have taken me in as a son,” said Kostadinovic. “Every second here is a new best memory. It is a family.”

Kostadinovic will be transferring to the new location in Fair Lakes. For the regulars, though, it was the bar’s closeness to their homes that helped make it such a popular destination.

“I had just moved into the area when I saw Carpool and I immediately loved the set up,” said Bobby Freer, who just started regularly coming to the bar last year. “Everyone was so friendly. People were active and hanging out on the patio. I kept coming and then people here start to recognize you. They take care of you. I’m sad to see it go.”

In a back corner of the bar, the Northern Virginia Backgammon Club sets up their boards. Like angels of death, the Backgammon Club has been circling around to the bars in the area on the eve of their closing. Before they came into Carpool nearly a year ago, they were at The Green Turtle a few blocks away, which has since been closed and is undergoing conversion into an Applebee's.

“I like it here,” said Larry Brown, one of the club’s leaders. “They’re very adapting .… We’re very concerned about finding a new space here. It’s hard to find a good spot in Ballston anymore.”

A few of the regulars order another round before the happy hour ends at seven.

“When it does close, I’m going to cry,” said Routzahn, “then I’m going to be pissed when I’m woken up with the construction on the new site in the morning.”