Standing Together at ADAMS
Votes

Standing Together at ADAMS 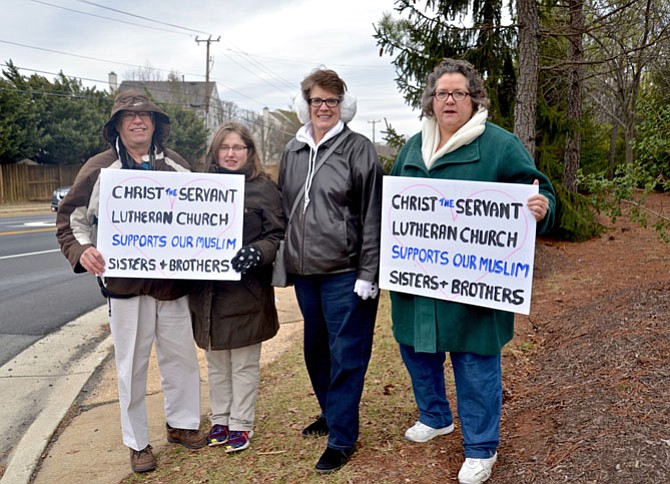 From left -- Bruce Bailey of Centreville, Julia Persing of Reston, Janet Rider of Centerville and Jolene McNamara of Herndon, all members of Christ the Servant Lutheran Church in Reston, show their support for their “Muslim brothers and sisters” at the entrance to the ADAMS Center during the Friday Peace Rally. Photo by Andrea Worker.

About three hundred supporters turned out with signs calling for inclusion, tolerance and religious freedom at the All Dulles Area Muslim Society Center on Friday. 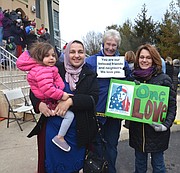 Herndon Mayor Lisa Merkel was on hand to lend her personal support to the rally. From left: Heela, 2,Venus Hashemee, Linda Mohrparaskevopoulos and Mayor Merkel. 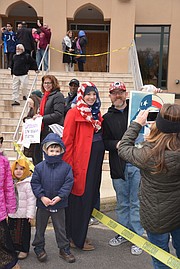 Shannon Mashaal and her children, members of ADAMS, make a new friend in supporter Dylan Rosenberg of Herndon.

From left: Robert Marro, executive director Alliance for an Indivisible America 2020 and a trustee and co-chair of government relations and media for ADAMS, Gov. Terry McAuliffe, Rizwan Jaka, chairman of the board, ADAMS, and Virginia Attorney General Mark Herring.

Virginia Gov. Terry McAuliffe was so warmly welcomed by the crowd of ADAMS congregants and by their supporters, that it took him quite a while to finally head off to his next engagement. Time constraints did not keep him from participating in a selfie or two. Looking into the camera, McAuliffe shouted out “Register to vote, vote, take action and stand together!

The All Dulles Area Muslim Society (ADAMS) campus has one foot in Fairfax County and the rest of the property in Loudoun. On Friday, it drew hundreds of people from all around the Northern Virginia region to show their support for the members of one of the largest mosques in the country at an event that featured appearances by Governor Terry McAuliffe and Virginia Attorney General Mark Herring.

This was no months-in-the-works assembly, but more an impromptu response to President Trump’s Executive Orders that suspend immigration from seven Muslim-majority countries for at least 90 days and the entry of refugees for at least 120 days. The move has caused travel disruptions, airport detentions and deportations since it was dropped without notice last week. Numbers are being disputed between different government departments, but the estimates are between 60,000 and 100,00 visas that were summarily and abruptly cancelled.

SUPPORTERS who turned up to reassure their Muslim neighbors found out about the rally mostly by word-of-mouth and through social media outlets. Bruce Bailey, Janet Rider, Jolene McNamara and Julia Persing learned of the event via a church email chain from Christ the Servant Lutheran Church of Reston and decided they had to attend. “This is not political for me,” said McNamara. “This is about basic human rights. The people here need to know that there are plenty of us out there who support and love them.”

“This is very emotional for me,” said Rider. “This is a free country, with freedom of religion. Being here to support our Muslim brothers and sisters is such a small thing to do.”

From about 11 a.m. until almost 2:30 p.m. the supporters lined either side of the steps leading into the Center. Their spirits were lifted and the cold temperatures kept at bay by their grateful hosts, who passed through the crowd with coffee, donuts, cookies and pizza.

As the congregants exited from their prayer service, funnelled through the middle of the crowd, they were greeted with shouts of “We’re here for you!” “We love you and ADAMS!” and a sea of men, women and children waving signs.

“United We Stand.” “Patriots Protect All Religions.” “Love They Neighbor. (No Exceptions).” These were just a few of the sentiments displayed in varying degrees of artistic talent.

Some of the recipients of this goodwill seemed almost overcome with emotion. Many walked shyly through the runway, heads down, but with their hands over their hearts. Others walked along with smiles and waves, calling out “Thank you! Thank you so much!” There were tears, and spontaneous hugs between strangers. Shannon Mashaal, one of the congregants, stopped with her children to meet and thank Dylan Rosenberg of Herndon, and within minutes the new friends were taking selfies.

“I believe truly in unity,” said Rosenberg. “What’s going on is just not right. We need to stand together, just like this.”

Herndon Mayor Lisa Merkel couldn’t agree more, and showed up to add her voice to those of the rally attendees. Carrying her “We The People – One Love” sign, Merkel praised the ADAMS Center. “I’ve been coming here for years. They are the most welcoming of people and have done so much to support the community. I’m here as a private citizen in their support, but also as Mayor to make sure everyone knows that we really believe that ‘Herndon is for Everyone.’”

When the last private prayer group had ended, the ADAMS officials opened wide their doors and invited the crowd to come in and listen to the numerous speakers. Friendly chaos ensued, as the ADAMS members helped the non-Muslim supporters find their way in, stacking their shoes on shelves before walking on the prayer carpets, and getting welcoming invitations to “please, sit here by us.” Marilyn Pierce of Reston admitted to the congregant beside her that this was her first experience inside a mosque. “I’m kind of nervous. Please let me know if I do something wrong.” She was quickly assured that there was no problem and nothing to worry about.

ALL OF THE SPEAKERS were welcomed with applause, but the appearance of Virginia Governor Terry McAuliffe was greeted with a standing ovation and shouts of “We love you!” and “Thank you!”

McAuliffe declared loudly to the crowd that immigrants were the foundation and the fabric of America, part of the “great mosaic that makes us strong” and vowed to fight the new administration’s immigration policies and any other order or direction that discriminates or impedes human rights and dignity. He also urged people to register to vote, to always vote, and to keep in contact with their elected representatives.

Before turning the microphone over to the Attorney General, McAuliffe announced that Virginia had just won the right to participate in litigation against the immigration ban and had also been granted the right to have the Commonwealth provided with a list of all persons who have been denied entry or removed from the United States since the Executive Order titled “Protecting the Nation from Foreign Terrorist Entry into the United Sates” was signed.

Attorney General Herring provided a brief update on the legal proceedings and finished his remarks by urging everyone to stay focused and active. “These actions are unlawful, unconstitutional and un-American. Let’s stand together.” Before the assembly dispersed, representatives from a number of non-Muslim faith communities in the area stepped up to offer support from the communities they represented.

As the event came to a close, many of the rally participants acknowledged that it would take more than this one gathering to effect change. “It’s the proverbial marathon, not the sprint,” was how Linda Mohrparaskevopoulos of Herndon described what is needed. “But we’re prepared to keep coming back.”