The Journey to the Other Side of the Street in Arlington: Part III
Votes

The Journey to the Other Side of the Street in Arlington: Part III 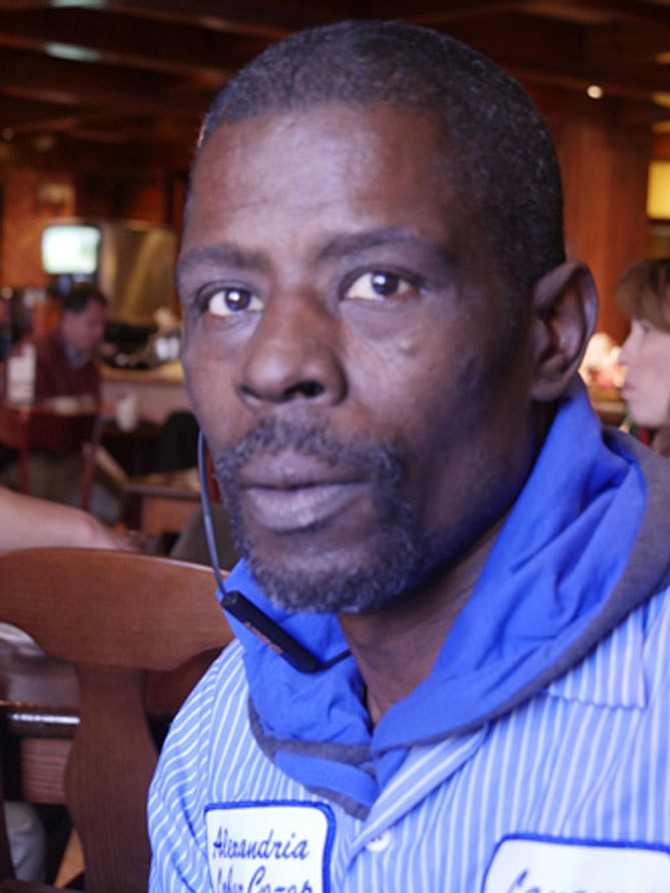 Lavonne Williams, formerly an ex-offender and homeless, remembers the day he met Michael Diffley. They began a journey together, sometimes up and down, that has led Williams from the streets to a room and his own business, Alexandria Labor Co-Op. Photo by Shirley Ruhe. 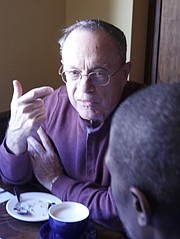 Michael Diffley, a former colonel in the Army and later a high school teacher in D.C., says ex-offenders and homeless need people to take them on one-on-one if they are going to make it. 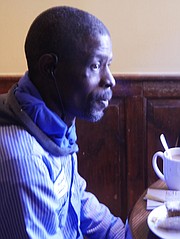 Lavonne Williams points out he has taken Diffley through a couple of headaches but “he hasn’t given up on me. We’ve gotten real close.”

Lavonne Williams and Michael Diffley sit sharing an afternoon cup of coffee remembering their journey. They recall the day they met in 2007. Williams said, "I was a homeless ex-offender, staying at the day shelter on Henry Street and sleeping on the streets at night. Mike pulled up in a truck and asked if anybody wanted to help him transfer mattresses donated from hotels to the furniture bank at ALIVE!.”

Diffley added, "Like many other days I would look for the older black guys in their 50s because I knew they had been through a lot of stuff and I liked to listen to their stories. My comment to him was he won’t be on the streets. His comment to me was he will come and help me move furniture.”

Though they didn’t realize it at the time, at that moment a bargain was struck.

Williams said, "Mike gave me a jump start on being able to find work." Diffley said, "You can roll the dice 40 times and the law of probability says you get snake eyes; you get a job. But an ex-offender rolls the dice 40 times and gets rejection and quits. They need people to take them on one-on-one, to roll up their sleeves.” He points to Williams and back to himself. "This works," he said.

At the time Williams also panhandled in front of St. Joseph Catholic Church where Diffley is a parishioner. Many people that he calls his "regulars" were giving Williams money and when they asked him what do you want, he would say, "I want work."

Diffley said, "I got to know him better. I made it a point to talk to him. So many people pass by and don't even give the time of day to the homeless. Lavonne has a great personality." At the time Williams had some medical problems; he was a heavy smoker.

Williams added, "They stuck a little cord in my vein to scrape the extra plaque out."

Williams said when he met Diffley he had gotten "real tired" of living on the street. He slept in used car lots and went to businesses on King Street where trucks were unloading at 5 a.m. to earn $20 just to get something to eat. He said it took him "a while to get the concept of his situation in its entirety. I was trying to live on both sides of the street at the same time. I have taken Mike through a couple of headaches and he hasn't given up on me."

Diffley explains that Williams was on probation and still smoking marijuana. "He thought he could beat the charge. That really hurt and he knew it. We had the walk around the block talk." Diffley said Williams was close to going back to jail and me saying to myself 'it's too hard for me to do anymore.' But I still remember it. I said, 'do you want to come over to my side of the street or not.' He said, 'I'm ready, Mike.'" Diffley added, "To do what Williams did, that's not easy to do. All your friends are over there on that side of the street, your social network, your drug supply."

Williams said, "There are a lot of people who say they want to do something but to put their foot in it is an entirely different perspective. You would rather stay where you are and beef than to look for work." He thinks of Jamison who first got him involved in panhandling. "He is a perfect example. Jamison has been panhandling for years. He says he can make more money than working for anybody." But sometime Jamison will get tired and want to get off the street and sleep on the couch and connect with Diffley.

Williams had been released from Lorton Prison in 1997 and told not to have a D.C. address anymore so he woke up in the D.C. jail and walked to the Potomac Avenue Metro, got on the train and came to Alexandria. He said it's the biggest letdown because there are expectations that the government has programs to help you. "Back in the day when you went to the unemployment office they had a Rolodex that they would get out and talk to employers about ex-offenders. There was a tax credit for employers who hired an ex-offender. But," he added, "if you don't do one-on-one, sending us out is useless."

Diffley says there are programs to help write resumes but do they take someone to find a job? “No, they are too busy writing resumes and with their computers."

Williams says when you get out, "you got 30 days. The first two weeks people are glad to see you. Then it's 'what do you do all day? When I leave, you're here; when I come home, you're here.'" He was married at the time so had some family support. He lived with his wife and her family. But as time went by he wasn't comfortable with her family's illegal activities "so I took her and moved to New Jersey." Williams got a job "with a pretty good company" repairing computers, a skill he had learned in prison. His job performance was so satisfactory they wanted to hire him permanently. It was when he had to fill out an application that they discovered his prison background and decided he "wasn't clean enough. So they let me go."

Williams had been at Lorton for 11 years. "When I went in I knew what I did was wrong but it was based on a vendetta for my sister." He explains someone gave his sister a "hot shot," a dose of heroin and cocaine at the same time. Now her mind fluctuates from 12-years-old to her current 53 years "and me and my dad are the only ones she recognizes off the top." He says he went after the guy who did it.

He said being in jail was close to life on the street. At Lorton, except driving, he says they did everything they did on the outside, like hustling and selling drugs. "We had carry-out soul food, some dormitories had parties.” He says the slightest thing was magnified in jail, "like if you said the wrong thing about somebody's visiting wife."

Diffley's personal journey that led him to the street where he met Williams began when he was a colonel in the Army stationed in New Orleans in the early '90s. He was involved in the Little Brother Program and "this was the first time I had interacted with folks on the other side of the street." He came back to D.C. for his last tour and looked for some way to get involved again. Since he had graduated from West Point, had two degrees from MIT and a Master of Business he decided he had the credentials to teach so got a position in the inner city. "The more I did, the more I got hooked on social justice." As the 12 years of teaching went by, he fell in love with the youths who were trying so hard, sometimes without any parents. He became much more progressive. "I used to be a Republican." Now he wants to do the things that society is obligated to do.

Williams says he has a lot of blessings. "I have a program for low-income mothers." They help him sort food for ALIVE! in exchange for community service hours. He has recommended several homeless for employment and he loads up boxes of food that a police officer delivers to homeless on the street. "Lavonne has become quite a philanthropist," Diffley said.

With the help of Diffley, Williams has started his own business, Alexandria Labor co-op, labor source for yard work, moving furniture, heavy cleaning inside and out, and other times when you need a helping hand on a project. Diffley said, “Williams is a hard worker. He once walked from D.C. to the ALIVE! Warehouse to meet his regular Saturday morning obligation. We worked to get him incorporated and so he got some focus."

Williams said, "You have to reset your mind from being a panhandler." He currently has regular clients and six employees. His goal for the future is to have a 50 percent self-sufficient business, with vehicles, tools, uniforms and an active payroll. He said when he upgraded from sleeping in used car lots to a couch, “I never understood what this upgrade could mean." Now he wants more.

Diffley helps subsidize his current room. ”I’m in a room now with a private bath." He says he is on a ladder now that will continue to go up. "Mike and I have gotten so close. Going down is not in the equation."