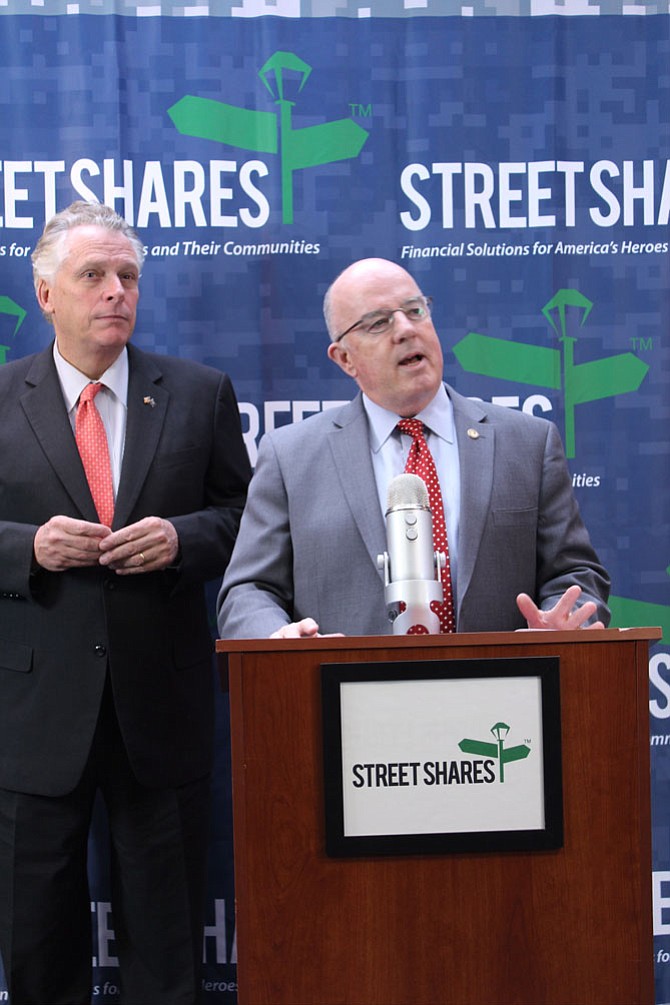 John Harvey, Jr., Virginia’s Secretary of Veterans and Defense Affairs, introduces Gov. Terry McAuliffe by speaking about his commitment to veterans, including his own son who is a 2nd Lieutenant in the United States Marine Corps. Photo by Fallon Forbush.

Gov. Terry McAuliffe announced a new goal of hiring 25,000 veterans in Virginia by the time he leaves office in 2018.

StreetShares CEO Mark Rockefeller is supporting the governor’s goal by funding 1,000 of the jobs over the next year.

Gov. Terry McAuliffe visited Reston on Wednesday, Feb. 1, to announce a new goal of hiring 25,000 veterans in the state of Virginia through the Virginia Values Veterans (V3) Program by 2018.

He made his announcement at StreetShares, Inc, a national online lending platform that aims to connect investors with veteran-owned small businesses, that is headquartered in Reston off Wiehle Avenue.

“When I took this job back in December 2013, I had never met the governor and he had never met me,” said John Harvey, Jr., Virginia’s Secretary of Veterans and Defense Affairs, as he was introducing the governor. “But what came through was an extraordinary passion for the veterans and the military in Virginia and what we could do to better their future.”

Harvey said the governor’s commitment to veterans is a personal commitment.

“His son Jack is a 2nd Lt. in the United States Marine Corps out in California and deploys very soon, likely to Iraq,” he said. “This is not something that is an abstract thing to the governor. It’s real, it’s personal, it’s in his gut.”

It is also because Virginia has a large veteran population.

“We have more veterans in the labor force than any state in the United States of America,” McAuliffe said.

McAuliffe originally gave the V3 Program, which aims to reduce unemployment among veterans by helping businesses attract, hire, train and retain veterans, a goal of hiring 20,000 veterans by the time he left office in 2018.

StreetShares CEO Mark Rockefeller, a U.S. Air Force JAG attorney veteran, dedicated his company to helping the governor reach his new goal by being a part of the V3 Program but also by committing some financial support.

“Because of the businesses that we are funding … StreetShares wants to commit to funding companies to produce 1,000 of the 25,000 goal in the next 12 months,” said Rockefeller.

The governor is also supporting legislation that would start a new state-funded grant program to encourage entrepreneurship within the veteran community.

The governor is supporting legislation that is being deliberated in the General Assembly that would establish the Virginia Veteran Entrepreneurship Grant Program and Fund. The fund would provide grants to eligible providers of educational, training or other services to veterans that help them start their own businesses in the state.

The Virginia Senate passed the legislation on Thursday, Feb. 2. The companion bill in the House of Delegates is currently being deliberated by the Committee on Appropriations.

“I would encourage all of you to get active to call your member of the General Assembly to say, ‘Support the administration’s efforts,’” McAuliffe said.

Rockefeller also encouraged those watching the governor’s visit on his company’s Facebook Live broadcast to help his company decide which veteran-owned companies would win $10,000 by going online and voting.

The StreetShares Foundation, which is partnered with JPMorgan Chase, provides three awards of $5,000, $3,000 and $2,000 to three veteran-owned businesses each month.

The 10 finalist companies can be voted on by visiting the foundation’s website at streetshares.com/foundation