Faith Communities Come Together to Feed and Protect Homeless From Hypothermia 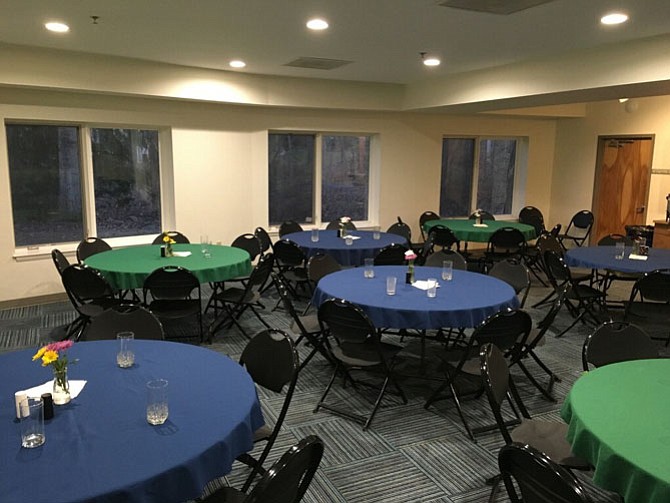 The dining room at the Unitarian Universalist Church of Fairfax in Oakton is set for service. Church volunteers at each church in the Hypothermia Prevention Program provide the homeless with dinner when they arrive, breakfast when they wake up and a packed lunch when they leave. Photo provided by Chaka Meney

The Unitarian Universalist Church of Fairfax in Oakton could hold 38 homeless individuals overnight at a time. Capacity for areas that churches use for the Hypothermia Prevention Program are set by the Fairfax County Fire Marshal ahead of time.

The program runs every year from Nov. 27 through April 1 and served 386 people last winter.

“We’ve seen over 170 unduplicated individuals throughout the program so far this season,” says Chaka Meney, a case manager and hypothermia program assistant at FACETS, a nonprofit organization that helps the county run the program.

The program relies on faith communities that volunteer to give the needy a safe place to sleep and warm meals. Each volunteer faith community opens its houses of worship for a week at a time.

From Sunday, Jan. 29, to Saturday, Feb. 4, the Unitarian Universalist Church of Fairfax in Oakton was one of the churches that participated.

“A year before we got started, we had people die on the street from hypothermia,” says Jerry Poje, a member of the church. “We said we wouldn’t let that happen again.”

He helped start the countywide program in 2003.

“Not everyone knows the plight of homelessness in our communities or how easy it is to tumble into homelessness,” he says. “They may have been living in their house and paying a mortgage but it all goes away when a health crisis happens.”

MORE THAN 40 houses of worship, including churches, synagogues and mosques have volunteered space for the program this winter season in Annandale, Springfield, Fairfax, Burke, Herndon, Reston, Oakton, Vienna, Falls Church and Fairfax Station.

“If you talked with some of the people here at night, it’s not freezing but it’s damn cold,” Poje says. And if it’s raining, it’s a mortal damage to your life.”

The homeless are given a mat and blankets and can choose a spot to sleep for the night. Some houses of worship choose to separate guests by gender while some others do not. Some also provide showers if they have the ability.

“I’m thankful that I have a place to stay for the night because I have slept outside before,” says a homeless man who was staying at the church and requested to remain anonymous. He is a veteran of the Army and has been homeless for the last three months.

“It’s going to be about 25 degrees tonight and there’s going to be some people out there that probably have on three pairs of pants and shirts, jackets and coats,” he says. “Or you can stay up all night and wait until a library opens up and try to catch a nap in there, or you can sleep on a bus or go to a mall and hope that security doesn’t kick you out.”

He wants to study cybersecurity once he finds stable housing so he doesn’t have to face homelessness ever again, he says.

In the meantime, he plans on saving up some money so that he can be a courier. But first he must save up enough money for a car.

“Guests are in different stages of homelessness, some are new and some have been for years,” says Meney. “Some have mental illness, were recently evicted, released from jail or hospitals with no place to go.”

Meney arrives at the church's early to assist her clients in applying for benefits and works to get them housing and employment assistance.

“I help them with resumes, access to mental health services and signing up for food stamps,” she says as a man comes up to her to ask about a section of his application for SNAP benefits.

“It can be a rewarding experience as a case manager because I feel like I help them get out of homelessness,” she says. “The goal is to get them housed.”

The county’s 2017 Point-in-Time Count of People Experiencing Homelessness was conducted on Wednesday, Jan. 25.

“We don’t have the numbers yet because we’re still compiling the data,” says Dean Klein, director of the Fairfax County Office to Prevent and End Homelessness. “We have continued to see a decline in our homeless numbers, but we’re certainly very concerned for those who are homeless currently.”

The new numbers will be published in the spring.