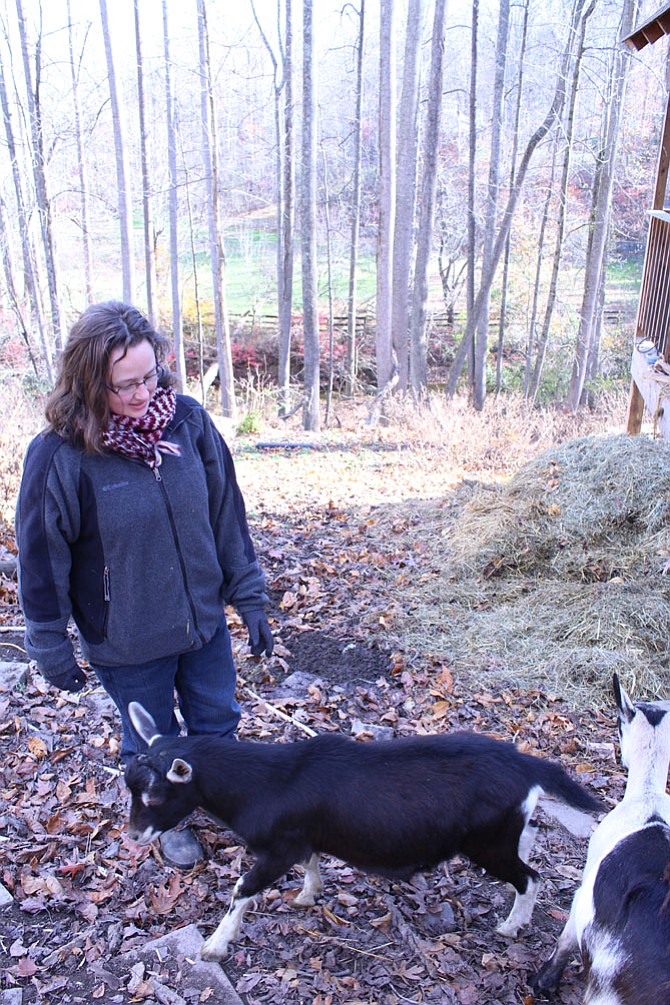 Sarah Wehri lets her goats out of the fenced-in pasture on her farm last fall. Photo by Fallon Forbush.

Sarah Wehri feeds some goats from her herd on her 3-acre property in Great Falls last fall.

Sarah Wehri of Great Falls cannot sell her goat cheese or goat milk directly to commercial consumers and her hopes of doing so died in Richmond last week.

Virginia HB 2030, the food products; sale at farmers market, farm, or home bill, would have allowed producers of food, including milk and products made from milk, to sell at farmers markets or through their home or farms without being regulated by the Virginia Board of Agriculture and Consumer Services. The producer would only have to inform the consumer that the food is not certified, regulated or inspected.

“It would be a very good stepping stone for small farmers because there is a lot of money that it takes to get up to the regulated dairy stage,” says Wehri, owner and founder of Amalthea Ridge in Great Falls, which makes hand-crafted goat milk products.

If you want to get milk and cheese from Wehri’s company, you must buy into its herd share program and lease a portion of her goat herd. This is because HB 2030 failed in the Agriculture, Chesapeake and Natural Resources Committee in the Virginia House of Delegates on Wednesday, Feb. 1, by a vote of 6 to 15.

“The concept was to be a way to kind of allow people to take back their food because they could then deal with small farmers,” she says.

But Wehri says the bill took a turn.

“Instead of being about someone getting their milk to a consumer, it turned into a debate about raw milk and whether we could sell raw milk,” she says.

Due to health and public safety concerns, the Virginia Department of Agriculture and Consumer Services does not support the sale and consumption of unpasteurized milk, according to Elaine Lidholm, spokesperson for the agency.

“Proper pasteurization, handling and storage are important to ensure the destruction and exclusion of harmful bacteria in milk,” she said in an email.

In March 2016, 14 people, including 12 children, became ill and were diagnosed with E. coli after exposure to unpasteurized milk distributed as part of a cow-share program in Virginia, according to Lidholm.

“Seven of these persons were hospitalized; three of whom were diagnosed with hemolytic uremic syndrome, which can lead to life-threatening kidney failure,” LIdholm said. “One of those diagnosed patients required dialysis.”

WEHRI doesn’t debate the risks of raw milk and says the issue is very polarized. But her company does not offer raw milk—technically.

“We pasteurize our milk, but to the state of Virginia, it is still considered raw milk, which is crazy,” she says. “Unless it’s pasteurized in a pasteurizer that has all of these certifications, you can’t call it pasteurized, even if it’s scientifically pasteurized.”

This is because the milk at Amalthea Ridge is not pasteurized with regulated machinery.

Wehri estimates she needs $60,000 of new equipment and many more goats and land to make her small farm and business profitable at a regulated level.

“We can’t have enough animals to make it profitable at that scale right now,” she says.