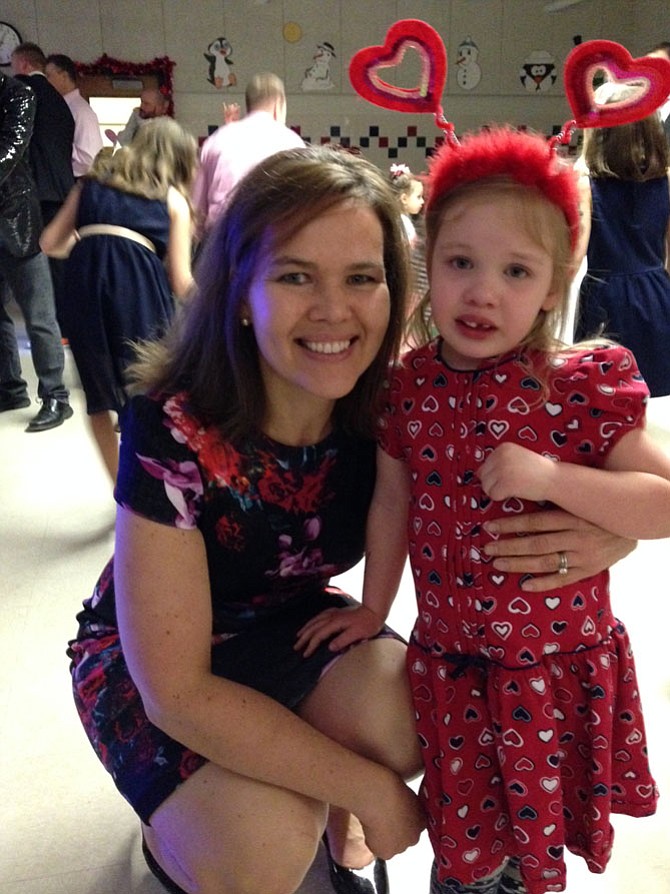 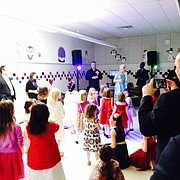 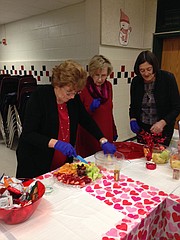 Vienna-area girls from preschool through sixth grade celebrated Valentine’s Day at a DaddyDaughter Dance hosted by the Vienna Woman’s Club on Feb. 3. The gym at Marshall Road Elementary School was decorated in Valentine’s Day motifs by club members to honor the 160 dads/stand-ins and daughters attending the sold-out dance party.

Some dads and stand-ins came dressed in tuxedos while others wore tailored business suits. One took the timely step of complementing his suit with pink tennis shoes. Another “dad” was a mom wearing a dress.

The girls dressed in their fairytale best, with elegant dresses, little heels, fancy hair adornments, and dressy coats. Some wore corsages. All, however, were accompanied by someone who loves them.

Stella Printer’s dad, Norman, could not make it to the dance this year; he is serving his country abroad. Mom, Julie, accompanied her daughter in his place.

About a dozen of the “dads” at the dance were there last year, the first, as well. One was overheard to say, “I have only five or six years that my daughter would want to be my date so I will come every year." Another dad said he brought his daughter while his wife took their son out to a nice restaurant, making it a special evening for the whole family.

Highlights of dance included a singing princess, a stencil/glitter table, professional DJ and professional photographer, and a raffle.

"Elsa" from "Frozen" sang "Let it Go," the official princess song of little girls everywhere. Not surprisingly, the young princesses joined the chorus. Guests who wanted to were photographed with Elsa.

Good-neighbor businesses helped defray costs by donating food and gift cards. Among them were Chick-Fil-A with a contribution of two platters; Cedar Lane Subway who donated a platter of sandwiches and discounted additional platters; and Fresh Market with donations of cookies. Maple Avenue Giant, Safeway, and Vienna Whole Foods donated gift cards to the Vienna Woman’s Club for the event.

The Vienna Woman’s Club welcomes new members. Serving the community through financial support and volunteer engagement with area youth is the club’s mission. With the temporary closure of the Vienna Community Center and the loss of its primary fundraising tool, the fall bazaar, the Vienna Woman’s Club created a new annual social event bringing together parents and their daughters.

A dad noted, “this was better than going to Disney World and cheaper, too."