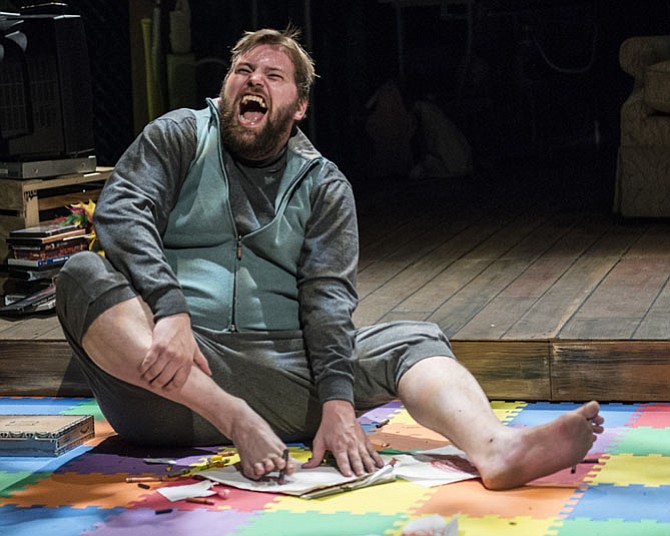 Doug Wilder in "Trevor" at 1st Stage in Tysons. Photo by Teresa Castracane

Doug Wilder and Amanda Forstrom in "Trevor" at 1st Stage in Tysons.

From left — Doug Wilder, Leigh Jameson, and Jacob Yeh in "Trevor" at 1st Stage in Tysons.

A rewarding tale about miscommunications in a family generating plenty of laughs before a heart-wrenching turn of events makes “Trevor” at 1st Stage a moving exploration of one family’s unusual bonds.

Inspired by true events, “Trevor” was written by Nick Jones, who wrote for the initial season of the vanguard television series, “Orange is the New Black.” Directed by Alex Levy, “Trevor” is a sharp production opening layers of sentiments. Levy has a keen touch with the boisterous, then to steer the production into taut, tense events.

“Trevor” examines how a family of two individuals living in a small town can depend on each other mightily. They have many misunderstandings since they don’t fully understand one another’s language.

After all, Trevor is a 200-pound chimpanzee (played with a rambunctious, rowdy gusto by Doug Wilder). When younger the audience listens in as he remembers being a celebrity performing with Morgan Fairchild (appearing as an apparition from a come-hither Amanda Forster). Trevor’s owner is the middle-aged, widowed Sandra (Leigh Jameson completely losing herself into the role as a resolute, protective, conflicted woman). As Trevor’s owner, Sandra presents as a forgiving “mommy.” When Trevor acts out early on, she forgives him saying “he is just having a bad day.” Later, just having a bad day is an understatement for Trevor’s behavior.

Beyond Sandra and Trevor, the show’s characters include a terrified neighbor who fears for her baby’s life, as well as one of Sandra’s few human friends and a local animal control officer. Each tests the tight connections between Trevor and Sandra. And Trevor also has a jaunty Chimp imaginary friend to commiserate with who appears from time-to-time named Oliver (Aaron Bliden).

The production take place in a set designed by Kathryn Kawecki with a worn, rustic look and well-used props from Cindy Landrum Jacobs. Collin Ranney’s costume design also gives off a worn-down essence.

“Trevor’s” sound design by Sarah O’Halloran is mood-setting beginning with preshow music with melancholy banjo tunes from Abigail Washburn and Bela Fleck. Titles included “Nobody’s Fault But Mine,” “What’s You Gonna Do.”

For those open to it, 1st Stage’s “Trevor” is an empathetic production about human and animal intersections. It will test an audience for their sympathies with its final heartbreaking images and words. Who bears responsibility is left to the audience.