Board of Supervisors to Consider Sunrise McLean Application
Votes

Board of Supervisors to Consider Sunrise McLean Application

The MCA Board of Directors urges the Board of Supervisors to deny the application. 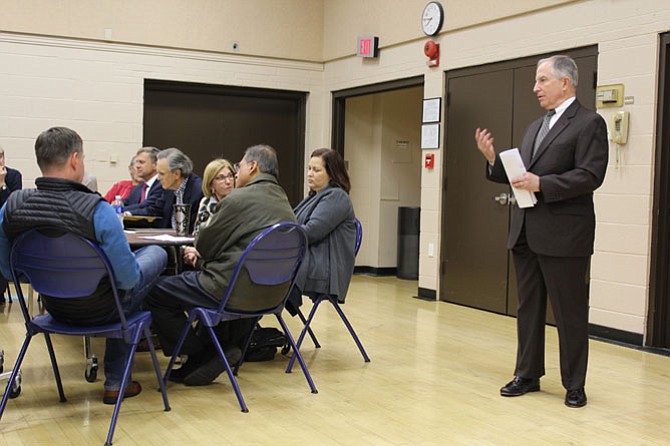 Sunrise Senior Living is seeking a special exception to build its facility on a 3.7-acre lot. Sunrise Attorney Stu Mendelsohn says that Fairfax County has waived the five-acre requirement every time an assisted living facility has been proposed.

Nearly 200 people attended a public meeting organized by the McLean Citizens Association to talk about the proposal. Most in attendance were opposed to the project.

The MCA Board of Directors approved a resolution that urges the Fairfax County Board of Supervisors to deny the application at its meeting on Wednesday, Feb. 1, seven months after It approved its first resolution opposing the project.

As reported by the Connection last week, the MCA revisited its position after the developer made changes to its proposal in response to significant community concerns and opposition.

The project would build a 73-unit assisted living facility in the residential neighborhood that could accommodate up to 90 residents and would also provide a memory care unit for residents with Alzheimer’s disease and dementia.

THE REVISED PROPOSAL would move the entrance of the facility from Kirby Road to Westmoreland Street; place 33 of its 55 parking spaces in an underground parking garage; and move a portion of the three-story building underground.

These changes reduced the building’s height and size, but did not necessarily appease citizens’ worries.

“They made it visibly smaller, but it is still a massive building in the middle of a residential neighborhood,” MCA President Jeff Barnett said in the meeting before the vote.

“The net reduction of mass is not sufficient to overcome MCA’s fundamental concern that the mass of this proposed development is incompatible with the neighborhood in which it would be located,” MCA’s new resolution says.

However, the group’s firm opposition to the project was not a unanimous decision this time around. Two members voted against the resolution and four members abstained from voting.

“I think this is a really tough one,” Sally Horn, co-chair of the group’s Tysons Liaison Committee, said in the meeting before the vote. “The flipside of the coin is the need for assisted living facilities in the county … I think this is a really, really hard one because we have two very important competing perspectives that have to be taken into account.”

An assisted living facility under county zoning ordinance is classified as a medical care facility. The county requires such facilities in residential areas to be built on parcels that are a minimum of five acres. The proposed location is only 3.7 acres.

Sunrise Senior Living is seeking a special exception from the county on the acreage requirement. These exceptions have been granted in the past.

As reported by the Connection last week, nearly 200 property owners and community members participated in a public meeting that was organized by the MCA to discuss the proposal.

“I think the majority of [community members] don’t want [the facility] there because of traffic and other reasons,” Madge Gazzola, vice-chair of MCA’s Budget and Taxation Committee, said.

She characterized the decision before the MCA’s members as “drawing a bright line” between the county’s zoning requirements and what she described as “human” and “people” needs.

NEARLY 19 PERCENT of McLean’s total population is aged 65 or older, according to the 2015 American Community Survey by the U.S. Census Bureau.

As reported last week by the Connection, Sunrise has advocated that there is a need for its facility in the area. In May 2016, the Fairfax County Health Care Advisory Board sent a memo to the Board of Supervisors stating that Sunrise had demonstrated a need for the development of an assisted living and memory care facility in the McLean community.

“Find a way to say we oppose, but we’re highly aware of the situation and would work with [the developer] for solutions,” Gazzola said.

One paragraph was included in the resolution that made this point.

“While the MCA recognizes that McLean has a large number of senior citizens and an increasing need for assisted living facilities for the elderly or disabled who wish to remain within the McLean community, it does not believe that this need outweighs the need for compliance with the requirements of the zoning ordinance,” the resolution says.

Members of the group took issue with the fact that the developer has not tried to find an alternate location in McLean for its new facility.

Despite the opposition, Sunrise plans to move forward.

“We’re pleased to see that the MCA acknowledges a need for high-quality senior care in McLean, in addition to the ample precedent by the Board of Supervisors in approving this use on properties less than five acres,” Sunrise Senior Living spokesperson Jennifer Clark said in a statement emailed to the Connection. “Sunrise wholeheartedly believes that local residents want and deserve to age in place within the community they’ve loved. We thank the MCA and neighbors for working with us to improve the application and look forward to proceeding with our efforts.”

The Fairfax County Planning Commission is scheduled to consider the application on March 8. The county’s Planning and Zoning Department will publish a staff report with recommendations some time this month before the meeting.