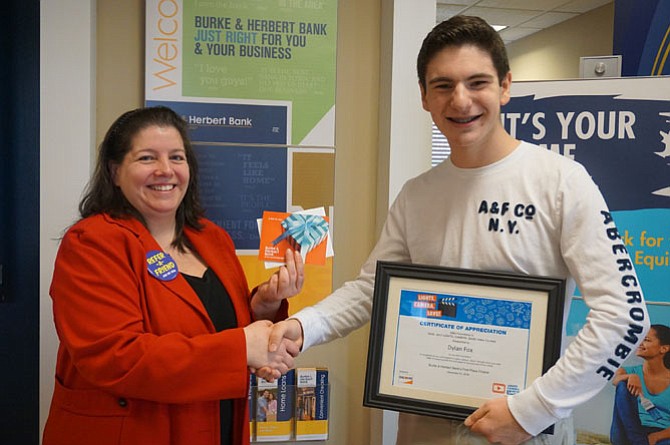 Burke & Herbert Bank’s Lights, Camera, Save! local winner, Dylan J. Fox, of Lake Braddock Secondary School, has been named a national finalist by the American Bankers Association Foundation. Lights, Camera, Save! is an annual video contest that encourages teen participants to produce a short film that communicates the importance of sound money management.

Fox is one of five students selected to compete for several awards, including a $5,000 grand prize and a scholarship for a teacher at their school to attend the 2017 Jump$tart National Educator Conference. This year, 125 banks hosted contests in 48 states and D.C. The winners of the national competition will be announced in March of 2017.

In addition to competing for cash awards, Fox’s video will be entered in the ABA Foundation’s “Savers’ Choice” social media contest. The contest – which runs from Feb. 1 through Feb. 8 on ABA’s Facebook page -- will feature the top five Lights, Camera, Save! videos and allow viewers around the world to vote for their favorite entry. The winner of the “Savers’ Choice” will receive a GoPro camera to encourage future filmmaking.

“All of us at Burke & Herbert Bank are thrilled Dylan is being recognized for finding such a creative and effective way to share valuable savings lessons with his peers,” said Terry Cole, Executive Vice President. “We hope everyone in our surrounding communities will take a few minutes out of their day to support a local student and cast their vote for Dylan’s “Save Your Future” video as the ‘Savers’ Choice.’”

To vote for Dylan’s video in the ‘Savers’ Choice,’ contest, visit ABA’s Facebook page. To learn more about Lights, Camera, Save!, visit burkeandherbertbank.com or lightscamerasave.com.