All In for ‘The Gin Game’ at Alexandria's MetroStage
Votes

All In for ‘The Gin Game’ at Alexandria's MetroStage

Notes from The Producer 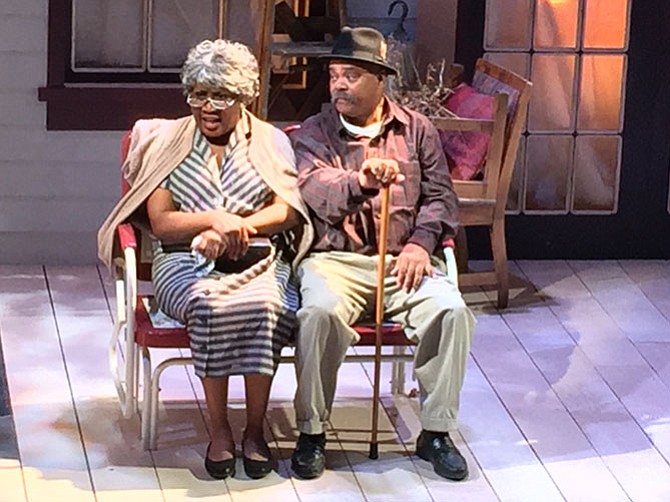 In rehearsal at MetroStage with Roz White and Doug Brown for “The Gin Game.” Photo Courtesy of MetroStage

The next production at MetroStage is “The Gin Game,” a Pulitzer Prize winning classic play by D. L. Coburn, opening Feb. 2 and running through March 12. It has been produced all over the country and all over the world since it opened on Broadway in 1977, and it is famous for showcasing many famous acting pairs in this two-hander that takes place on the sun porch of a retirement home. Of course, the most notable acting pair was the husband and wife team, Hume Cronyn and Jessica Tandy, appearing in the original production, which received four Tony nominations with Ms. Tandy winning the Tony for Best Actress. There was a Broadway revival in 1997 starring Julie Harris and Charles Durning, receiving three more Tony nominations, and then in 2015, in the same theatre on Broadway, the John Golden Theatre, where it had opened 38 years earlier, it opened with none other than James Earl Jones and Cicely Tyson.

Now what does all of this have to do with MetroStage? First of all MetroStage loves to find the perfect actors to showcase on its intimate stage. (Case in point Tom Story playing 40 characters in “Fully Committed” over the holidays.) Secondly, back in 2015 in our world premiere production of “Uprising” actors Doug Brown and Roz White played opposite each other as Lottie and Charlie Pick. They were so charming on stage together, having been in many MetroStage productions but never together, that I, the producer, said to myself, “I need to find a play for these two actors.”

And I guess you could say the rest is history. Here they are in “The Gin Game,” following in the proud steps of so many, and we are delighted to be showcasing them together in this production. So grab a seat at the table (a card table that is!) and meet Fonsia and Weller, two remarkable characters, while they get to know each other, playing cards while exposing their lives, the aspirations and the disappointments, and ultimately revealing who they really are. It is a rewarding journey we will be taking with these two, so join these memorable characters and two of MetroStage’s favorite actors over a game of cards. Who knew they could be so revealing?