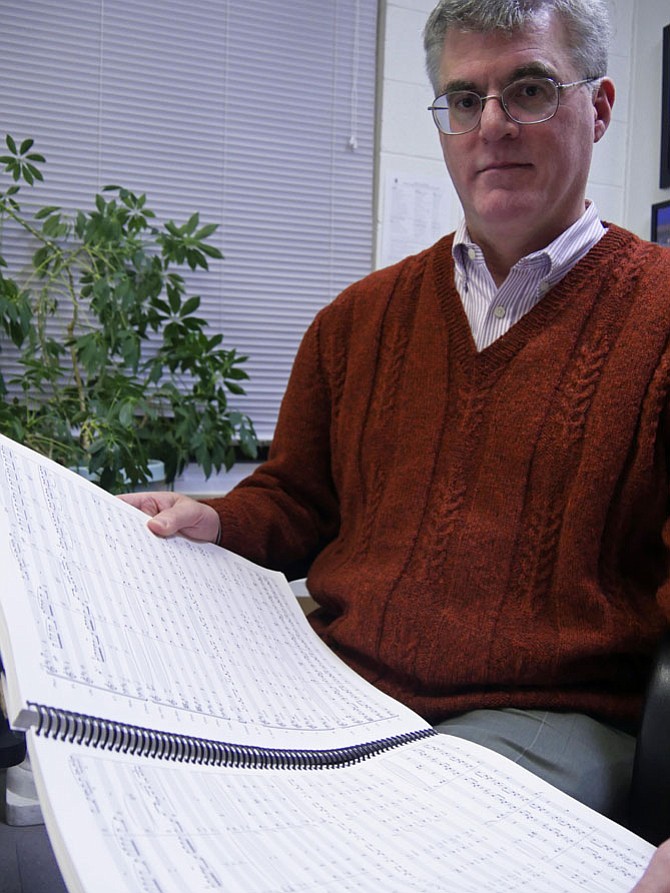 John McCrary, director of Music and Liturgy at Blessed Sacrament Catholic Church on W. Braddock Road, created the full conductor’s score for “The Prodigal Son.” He says this is what six months of work looks like. Photo by Shirley Ruhe.

"Inhale, sound ‘Hummmm.’ I need to see your jaws moving. You will feel a

John McCrary, with the assistance of rehearsal accompanist Janet Maalouf, leads the special choir practicing Beethoven. This is one of the selections for the church concert Feb. 24 at 7:30 p.m. at Blessed Sacrament.

buzzing under your nose." Eyes are fixed on John McCrary, director of Music and Liturgy at Blessed Sacrament Catholic Church on W. Braddock Road, who is warming up the special choir practicing for the Feb. 24 concert. McCrary likes to do this concert the Friday before Lent. "Our space is so intimate that even non-concert goers get drawn in.”

"This choir is open to anyone who wants to sing." They will perform a major

John McCrary says this choir has been practicing since October for the concert featuring “The Prodigal Son” that hasn’t been performed in the United States for 75-100 years. He has been working on the score for over a year.

choral work with full orchestra. In addition to his regular duties as choir director, five years ago McCrary began a special series that "focuses on music that nobody does but deserves to be played." Last year it was Handel in English and the year before Berlioz which was a Christmas piece sung in French "We always sing in the original language. We learned that vocal French is pronounced differently than spoken French."

This year they are featuring "The Prodigal Son" by Sir Arthur Sullivan (without Gilbert.) "This is a work that hasn't been performed in the United States in the last 75-100 years." He says a recording came out a few years ago, "and I liked it a lot. I thought, I have a tenor, Phil, who I went to college with."

He was able to buy the orchestra parts from a music store on-line. But there was no full score available for vocal singer parts with a piano reduction of the orchestra part. He explains he took the orchestra parts and typed them into the computer using music printing software. McCrary pulls out a weathered book of music to show he has purchased an old vocal score from E-bay. The next step was to type in the vocal parts and painstakingly put it all together himself to create a full conductor's score. Finally he typed in a piano accompaniment to create the vocal score for the soloists and choir. "This is what six months of work looks like."

McCrary explains that he picks up orchestra professionals for the performance from military bands, including strings from the Air Force and winds from the Army and Marines. "We do a lot of interesting music that they won't get to play in their band." This year he also has a number of players from the Kennedy Center. Two of his soloists will come from The San Francisco Opera Company, which is dark in January.

He says this group started practicing in October, but he started the score prep a year ago. "Now they practice 1-2 times a week. "The Prodigal Son" is just an hour in length so in order to fill out the program he added Regina coeli, KV 276 by Mozart; Schicksalslied, Op. 54 by Brahms; and Choral Fantasy, Op. 80 by Beethoven. Tonight they are working on Beethoven. "Turn to page 4." They are singing in German. "Remember the r's are rolled." He says, "It's a full quarter note. Let's start right where we stopped." The pianist plays an F chord, and they begin again. "I'm hearing all sorts of creative words right now."

McCrary has been at Blessed Sacrament for almost 19 years. He says he began at St. John Newman in Powhatan, Va. "It was a small parish of 250 families, and I created an adult choir there." Now he directs a traditional choir at the 11 a.m. mass, a contemporary ensemble at the 9 a.m. mass and a five-octave hand bell choir that plays about once a month. In between the six Sunday masses, he practices with the choirs.

McCrary explains the contemporary choir includes vocal and instruments like guitar, clarinet, viola and bass and "sometimes I play the flute. We don't do many traditional hymns but more modern contemporary hymns. We don't do praise to the Lord so much." The choirs range in age from the 20s to 80s. "Some have been singing since the '70s." He says anyone can sing in his regular church choirs. "I don't audition them." Over the years he has had some who weren't as good as others, but "I usually get people to match pitch and fit in." He says the last thing he wants is a choir of soloists.