Oh, The #Adulting You’ll Do
Votes

Oh, The #Adulting You’ll Do 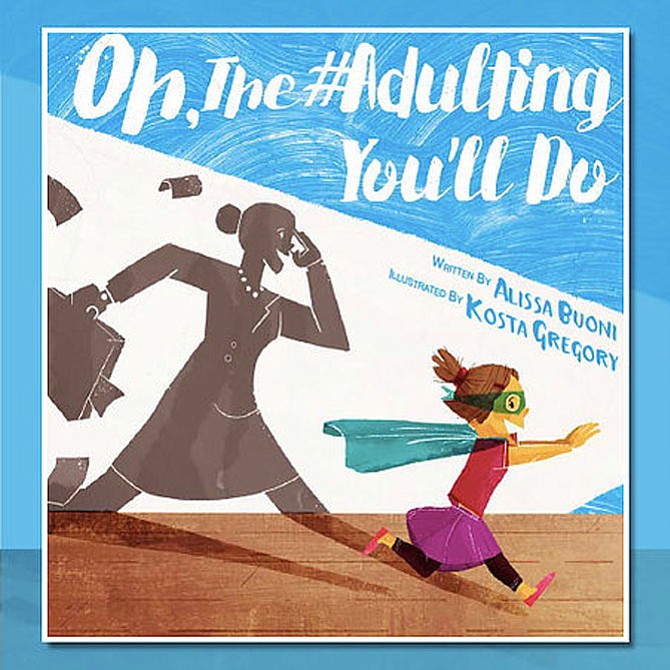 Beware! That is “#Adulting” coming up behind the kid in Alissa Buoni’s recently published children’s book. “But it’s not scary,” says the author. “Just a little comparison and a way to help adult and child help the youngsters slow down a bit and enjoy just being a kid.”

Reston — Alissa Buoni knows a thing or two about how to talk to kids. If being the mother to three children – Ava, Vincent, and Decklan – all under the age of six isn’t enough to give her serious kid-communication credentials, let’s not forget that she has a Bachelor’s Degree in Psychology from Virginia Tech and a Master’s in School Counseling from The George Washington University. She uses all of that experience - personal and educational - in her debut children’s book “Oh, The #Adulting You’ll Do.”

Buoni didn’t start her professional life thinking that she would add “Author” to her resume, although she admits that writing has always been a hobby and a pleasure. “I think I was around twelve or thirteen when I sent some songs I had written to several major publishing companies,” she says, but the lack of Grammies on her shelves meant she pursued a more “practical” career path as she was growing up. Buoni followed the Reston motto, living, working, and playing in her hometown, working as an environmental analyst at SAIC (now Leidos) headquartered in Reston.

What pushed her to finally pull some of those unfinished drafts from the desk drawer and see them through to publication?

“Loss,” she says, “and the feelings, thoughts, and new perspectives that come along with it.” In 2009, Buoni and her husband Rogan Flowers lost their first child, son Kendrick, in infancy due to a rare syndrome and congenital heart disease. “The world around us is moving so fast. I’m watching my kids now grow up so fast, right before my eyes. I try to really pay attention to each day, and to help them be kids, with kids’ problems, kids’ joys. Let parents do their job. It’s our time to do the ‘adulting,’ not theirs.”

In a rhyming, sing-song and humorous fashion, Buoni’s book extols the joys of childhood, while gently reminding her young audience to enjoy the day with comparisons of a child’s day to the adults around them. “I told you, this is a book for both the child and the adult,” she laughs.

“When you wish to be older, think long and think hard. For when you grow up instead of tag, you’ll be mowing your yard...So today you’re a kid. And it’s great to be you. One day you’ll grow up. Oh, the #adulting you’ll do.”

Buoni looks for a balance in her story, giving young readers a glimpse into adulthood without making them anxious about the future in store. “Don’t get me wrong,” she writes, “Being an adult is fun. There are lots of things you get to do when your days as a kid are done.”