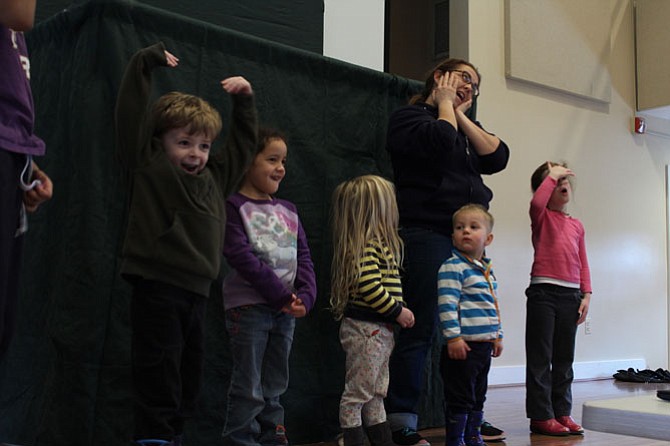 Herndon — The groundhog that lives on the grounds of Frying Pan Farm Park did not come out of its den for visitors on Sunday, Jan. 29. The next day, all Fairfax County public schools had a two-hour delay due to inclement weather.

Whether this is a foreshadowing of what Punxsutawney Phil will see on Groundhog Day later this week is yet to be seen. Nearly 60 parents and children visited the park’s visitor center to learn about the weather-predicting rodent and the holiday that celebrates them every Feb. 2.

The groundhog, also known as a woodchuck, whistle pig or land beaver is a rodent of the family Sciuridae, John McNair, who works for the Park Authority, explained to the gathering. In fact, the animal belongs to the group of large ground squirrels known as marmots. The whistlepig nickname comes from the sound that it makes.

The animal eats a diet of grasses and vegetables, including dandelions, berries and garden vegetables. They are also known to eat grubs, he said.

McNair said he was certain that groundhogs at the park eat healthy amounts of blackberries off the bushes that can be found on the property.

But what the animal is best known for is digging. He told the gathering that the holes they dig are much more than what they seem.

“Groundhogs have rooms just like our homes do,” he said.

In these burrows are where they hibernate for three to seven months out of the year, he said.

According to folklore, if a groundhog emerges from its burrow on Groundhog Day and does not see its shadow, then the spring season will come early. If the groundhog sees its shadow and retreats back into its den, then winter weather will persist for six more weeks.

Visitors did not see the groundhog that made the den at the park, but it tends to hang out in the cow field when it is not hibernating, says Fairfax County Park Authority’s Rebecca Henenlotter.

She took groups out to see the opening to the animal’s den and explained how groundhogs can burrow many rooms for its den as far down as five feet and as wide as 50 feet.