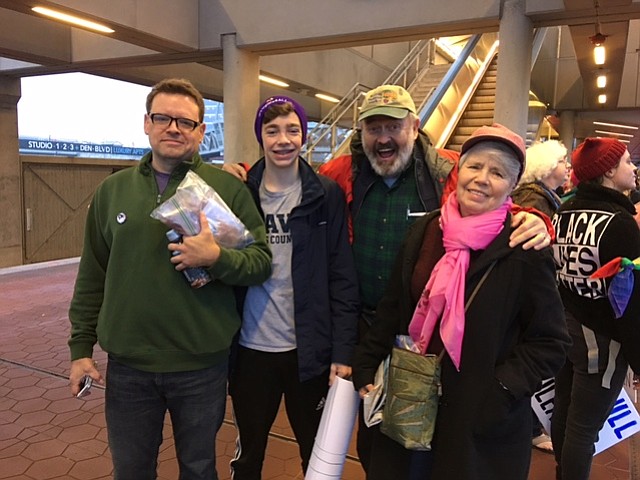 Reston — The aftermath of the 2016 Presidential Election sent shockwaves around the nation and through our community. The ferment from turmoil around the White House seems especially strong in Reston.

During the transition while some were still pulling up Clinton-Kaine yard signs, an early Trump uproar centered on the President-elect’s ethics or lack thereof. Our first corporate President refused to separate himself from his vast business enterprises. Whoa, that is totally inappropriate! You must divest all, announced the Director of the low profile Office of Government Ethics. This brave bureaucrat who stood and spoke this obvious truth to the then President-elect and most-powerful-man-in-the-world-to-be is South Lakes graduate Walter Schaub.

The day after the new president’s inauguration on Jan. 20, the largest throng of people I ever saw descended on the Capitol area to protest Mr. Trump’s inauguration. The “Women’s March answers the Inauguration” headlined the Washington Post the next day. We attended the March and saw with our own eyes thousands of Restonians boarding the Silver Line trains to join a protest as large (or larger?) than the inauguration itself. Enough to drive a narcissist over the edge.

Why the huge reaction to Trump, especially among women? A combination of fear and anger! Candidate Trump’s demeaning treatment of women, including condoning sexual assault in a tape recording revealed late in the campaign seared the memories of women everywhere. His Party’s threat to disappear the ACA and Planned Parenthood which provide vital health services to women fueled the fire. We could feel the emotion in the Marchers, but it was strongest among the women.

Pundits and others were impressed by the March and its intensity, but figured it was just that, a March. Wrong again! Since the March, millions have participated in protest actions around the country, indeed around the world. The new regime daily feeds the fear and anger. Trump cabinet nominees daily create new outrage among women and us men folks. To name a few: The Secretary of State nominee is Rex Tillerson, CEO of Exxon-Mobil and close pal of Vladimir Putin, the Russian who oversaw interference in our elections and has an oil drilling deal with Exxon and rumored financial links to the Trump clan. Betsy DeVos, nominee for Education Secretary dreams of disappearing public education, replacing it with a private, money-making system. Senator Jeff Sessions for Attorney General has a clock that can turn back the hands of time to days before that pesky Voting Rights Act and Civil Rights stuff. Climate change denier Scott Pruit of Oklahoma is to dismantle the Environment Protection Agency and another denier, Rick Perry of Texas, will do the same at Energy. Last Friday Trump proclaimed bans on Muslims and refugees coming into the United States, fueling even more outrage from the Pope and the entire planet.

Here in Reston, resistance to Trump started with a meeting of perhaps 20 at the Montmartre Café at Lake Anne organized by Kathy Robinson, Donna Shaffer and others in November. It has grown and morphed into a larger “Herndon-Reston Indivisible” group numbering 300 or more. And, Indivisible locals are springing up all over. (Google it to learn more.) And, they are organizing actions. Everyone is writing letters and emails, or calling Senators and Congressmen and the White House (comments line shut down due to the volume!) They organize sit-ins at congressional offices, and now with the Muslim ban, at airports. More each day!

Fran and I keep a list of phone numbers of Democrats and more moderate Republicans on the fridge by our phone, and we make calls every day. The next Herndon-Reston Indivisible general meeting is Tuesday, Feb. 21 at the Sunset Hills Montessori School, 11180 Ridge Heights Rd. in Reston. Join the Resistance.