88 and Ready to March Again
Votes

88 and Ready to March Again 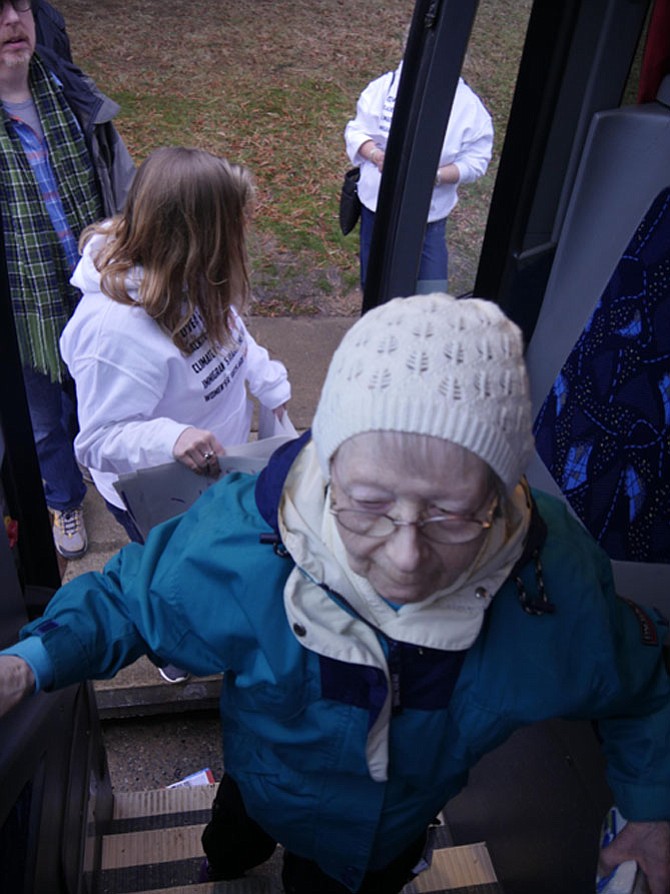 Eighty-eight-year old Ivy South boards the bus for the Women”s March on Saturday, Jan. 21. She said it was her first march, “But I’m ready to go again.” Photo by Shirley Ruhe.

oarding the bus for the Jan. 21 Women’s March, Ivy South says she is 88 years old and “this is my first march.” Ivy was born in England in a very small place, “not even a village” and came over to America in “I think it was 1947.” She has voted in every Presidential election since she was 21 years old.

But South said, “I have had time to pay more attention to politics this year than every before. I wasn’t very happy with the outcome. I did not feel it was very honest. I really didn’t like the things they said about Hillary. And he was so disgusting and so much of a liar. I would watch the clips and Trump would say one thing one day and the next day say he never said it.” South said one thing she was troubled about was him wanting to get rid of the Affordable Care Act.

South said the March felt great, “It was very nice indeed.” She said there were people coming in from the side streets, sometimes on both sides, but she didn’t see or hear any violence. She had never seen so many people together in her life. But she was disappointed not to hear a speaker. “We found our way blocked so we ended up going back the way we had just come.” She added that “the police people told us there was a big TV screen but we never found it and Cher was supposed to be there but there was such a big crowd she couldn’t get in.”

When the bus was ready to return, South didn’t get on it. “I was disappointed. I came to march.” So South stayed on until about 8 o’clock and then she and two others tried to get a taxi home but “of course they were all full. But finally we got one.”

South said she saw so many signs. “I was really pleased. But I am 4’ 9 1/2” inches tall so I spent most of my time looking up at the signs all around me. I got a stiff neck.” South said when she got home “I wasn’t even tired. I’m ready to march again.”